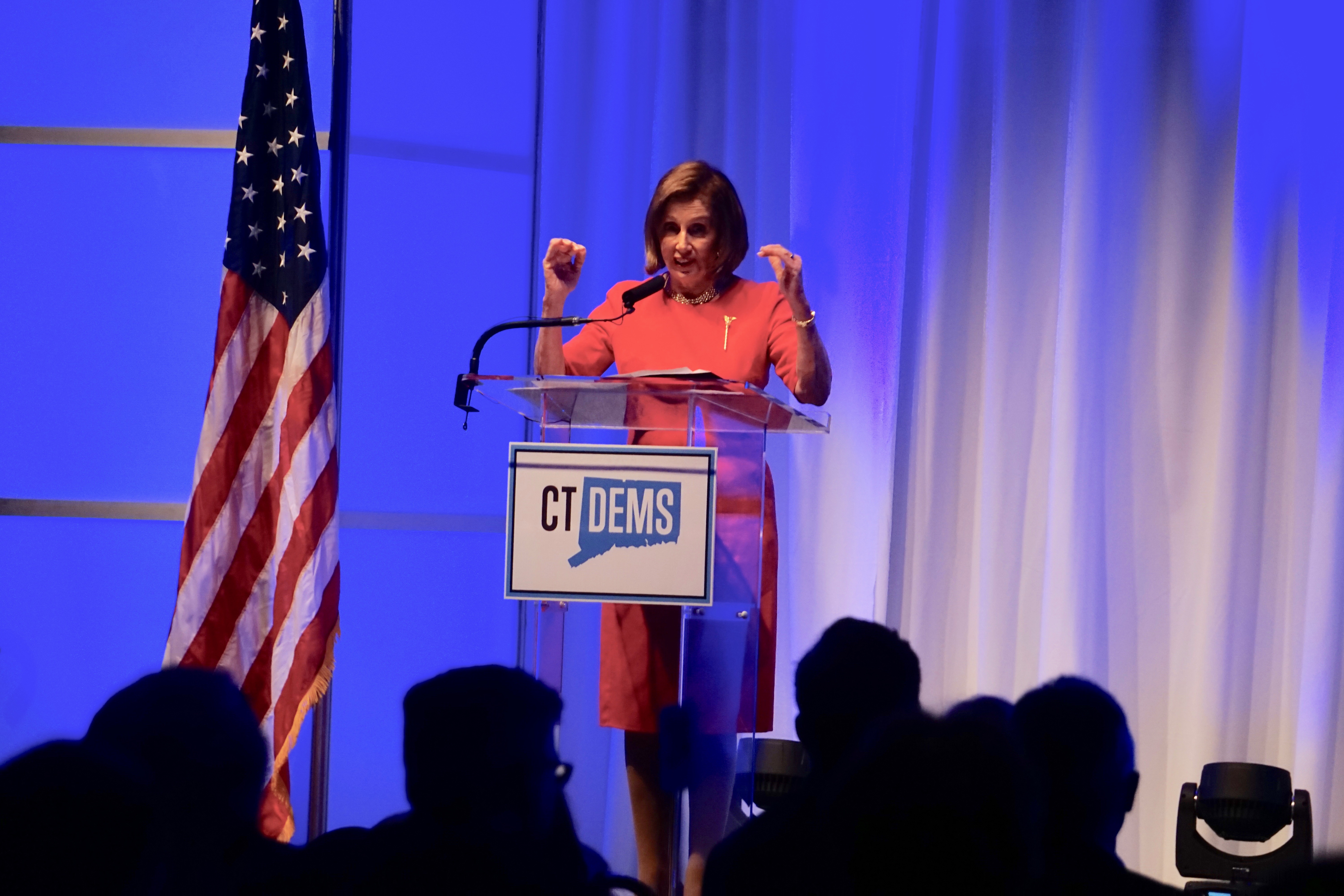 Hartford — U.S. House Speaker Nancy Pelosi on Friday promised an audience of 1,000 Connecticut Democrats an unwavering pursuit of what she called President Donald J. Trump’s wrongdoing as a candidate and president — but one geared to his defeat at the polls in 2020, not his impeachment in 2019.

“I’ll get back to that in a moment,” she deadpanned.

The crowd laughed and applauded.

Pelosi is allowing a variety of House investigations of Trump in the aftermath of the Mueller Report, but she has made clear those pursuits are intended to remind the American public of his disdain for the rule of the law and his disregard of warnings by his own intelligence officials that Russians interfered in the 2016 election and will do so again in 2020.

“Now, he is giving them the green light to do it again,” Pelosi said. “Yes, he will welcome any further intervention.”

The crowded booed, then called for impeachment.

The 79-year-old Pelosi has been the constant in leadership for Democrats in Washington through three presidencies, leading the House Democrats for 16 years as minority leader and twice as speaker, regaining the gavel in January. She is now the voice of a Democratic resistance, fighting Trump with an electoral strategy.

The heart of her congressional district is liberal San Francisco, and Pelosi was an important partner to Barack Obama in passing the Affordable Care Act, Wall Street reforms and an economic stimulus during her first stint as speaker — roles highlighted by her friend, U.S. Rep. Rosa DeLauro, D-3rd District, in a raucous introduction.

But with Trump in the White House, Pelosi has been an anchor keeping the House from turning left on a range of issues important to many of the new progressives in Congress, including climate change, universal health care and impeachment.

“She’s walking a fine line, and she’s doing it in a masterful way,” said state Sen. Mae Flexer, D-Killingly, a young liberal, as she exited the hall.

Pelosi, who is second in the line of presidential succession behind the vice president and is the highest ranking Democratic official in the U.S., is a sought-after rainmaker for Democrats gearing up for the 2020 election cycle. On Friday, she was the keynote speaker at the Democrats’ major annual fundraiser, the recently rebranded John Bailey Dinner. 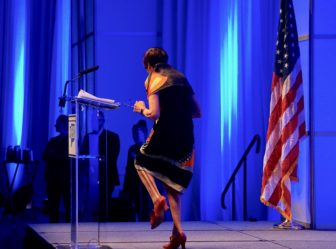 “She’s got a spine of steel,” said the 76-year-old DeLauro, the dean of the Connecticut delegation, who danced her way on stage to introduce Pelosi, amusing and energizing a crowd of Democrats who paid anywhere from $200 to $2,500 to be there.

As DeLauro told The Hartford Courant this week, she believes Democrats “must not lose focus of the kitchen-table issues that matter to working families.”

Especially families in districts that voted for Trump in 2016, while electing Democrats. Pelosi has made no secret of her belief it is crucial to help Democrats win re-election in Trump districts, where impeachment would be toxic.

Steve Israel, the former New York congressman and leader of the Democratic Congressional Campaign Committee, wrote in The Atlantic this month that Pelosi kept a portrait of Lincoln in the conference room she used as minority leader. She would point to the portrait and remind visitors of a Lincoln quote: “Public sentiment is everything.”

“For Pelosi, public sentiment doesn’t mean following public opinion, but strategically shaping it so that it’s more receptive to a strategic goal,” Israel wrote. “It’s not just laying the groundwork; it’s fertilizing it. That takes message discipline, unity, and patience—all of which will be necessary as pressure to impeach President Donald Trump continues to build.”

“If what they do down in the House, if it’s not going to be brought up in the Senate, why put their names on the line and do something that they can’t  get passed in the Senate?” Wyman said. “So our goal for 2020 should be the new president and keep our House Democratic and make sure we get a Democratic U.S. Senate.”

Former Gov. Dannel P. Malloy, who sat at a table directly in front of the stage, concurred:

“If you can’t get anything through the Senate, in that context I can understand her reasoning,” Malloy said.

On stage, Gov. Ned Lamont told Pelosi, “We admire the dignity and the grace and the fighting spirit you have taking on Donald Trump down in Washington D.C.”

“Our House investigations are breaking through the Trump administration’s cover up — the criminal cover up,” Pelosi said. “We must have the truth for the American people.”

Pelosi acknowledged every member of the congressional delegation, taking a moment to acknowledge the diversity and energy of the freshman class that put her back in the speaker’s chair. Some of those new members have challenged Pelosi to be more aggressive, occasionally going off message.

Connecticut is a deep blue state when it comes to congressional politics, with no Republican winning here since 2006. But it has yet to see a young insurgent challenge to a Democrat incumbent in a primary, like Alexandria Ocasio-Cortez in New York or Ayanna Pressley in Massachusetts.

U.S. Rep. Jahana Hayes of the 5th District is in same freshman class as Ocasio-Cortez and Pressley, and Hayes and Pressley share the distinction of being the first black women elected to Congress from New England. But Hayes won an open seat as an outsider encouraged to run by U.S. Sen. Chris Murphy, whose campaign drove the Democrats’ successful voter-turnout effort last year.

On Friday, Hayes shared her table with some of the high school girls and college women drawn into their first political experiences by her campaign. “This is why we’re here,” Hayes said. “This is who needs to be in the room.”

“I think that from what I’ve seen so far, she is so incredibly politically astute, and I’ve come to  trust her judgment,” Hayes said. “I think she sees long range what so many people can’t yet see.”