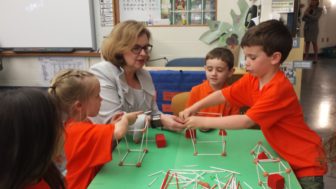 Education Commissioner Dianna Wentzell in a kindergarten classroom at an elementary school in Bristol in 2015. Her last day on the job is today. (file photo)

The state Board of Education appointed Desi Nesmith to be the second interim Department of Education commissioner Friday as the search for a permanent leader heads into its seventh month.

Nesmith has been with the state Department of Education for four years as chief turnaround officer, assisting the state’s lowest performing schools and districts with academic improvement.

“I am humbled and grateful to Governor Lamont and the State Board of Education for affording me the opportunity to serve Connecticut’s students, families and educators in this role,” Nesmith said. “I will work diligently to ensure a seamless transition once a permanent Education Commissioner is named.”

Before joining the state education agency, Nesmith was the principal of Metacomet Elementary School in Bloomfield, Connecticut where, during his tenure, the third grade achievement gap in reading was reduced by 19 percent and students earned test scores in reading, writing and math that exceeded the state average.

He replaces outgoing Commissioner Dianna Wentzell, who has been serving as interim commissioner since her term ended March 1. Her last day on the job is Friday.

Paul Mounds, Gov. Ned Lamont’s liaison to the Board of Education who is helping to recruit candidates, said a commissioner will be chosen sometime in July, rounding out the last of Lamont’s cabinet positions.

Last week, the state Board of Education’s search committee interviewed four candidates and on Friday forwarded the names of recommended finalists to Lamont.

Peter Yazbak, spokesman for the state Department of Education, said he could not say how many many finalists’ names were forwarded to the governor.

The next commissioner will take over a vast department with responsibilities ranging from ensuring children with learning or physical disabilities get the education the law requires to negotiating with low-achieving districts about how state funding will be spent.

The agency is also responsible for oversight of the state’s charter schools as well as grading every public school on its performance. The outgoing commissioner regularly pointed out that the department has been struggling to keep up with all of its responsibilities as staffing levels at the agency have declined significantly in recent years.

Wentzell stayed on at the agency so she could oversee a successful handoff to the new commissioner, but that won’t happen now.

The commissioner job isn’t the only education vacancy, however. Mounds said the governor intends to fill four vacancies on the state Board of Education. When those slots are filled, the board membership will number 11.

State statute says the education board has 12-members, but  the state Board of Education bylaws say the number is 11. The board has been operating with 11 members in recent years, which Mounds says makes sense because it avoids tie votes.

Yazbak said he would leave any discussion about the discrepancy between state law and the board bylaws to the governor’s officer.

Mounds said the process of identifying candidates as appointees to the board has begun but any further progress in the selection process is contingent upon the completion of the search for commissioner.

“You can’t rush judgment. You need to make sure you have people who are aligned and have a full understanding of the issues and also have alignment with the governor as well,” Mounds said. “We will be ready to move forward with additional names to the state board. But at this time the state board can fully function.”

When appointed, Lamont’s new education commissioner will be tasked with rolling out the education legislation passed this session, such as minority teacher recruitment.

“As this administration slowly gets going we’ll be looking to work with those within the educational community to address the various achievement gaps that we have in our state and also address how we can attract retain and promote the best and the brightest teachers,” Mounds said.