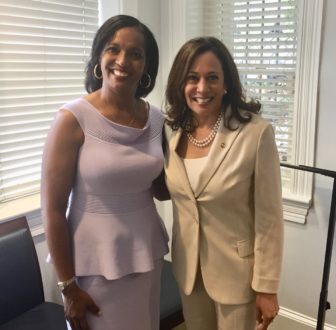 The endorsement was announced in an op-ed for Essence, a monthly magazine whose prime readership is black women.

She is the first federally elected official in Connecticut to endorse in the Democratic presidential primary. She splits with Gov. Ned Lamont, who on Tuesday endorsed former Vice President Joe Biden.

In her op-ed, Hayes wrote that she was influenced by last week’s Democratic debate, in which Harris attacked Biden for his 1970s’ opposition to the busing of school children to integrate schools.

“We watched as one candidate in particular had the courage to ask the tough questions and demonstrate the strength to handle difficult situations,” Hayes said of Harris’ performance at the debate.

Hayes, a former National Teacher of the Year, also wrote that  “as a mother and a teacher, Senator Harris’ powerful recount of being part of the second class to be integrated in Berkeley was a defining moment for me.”

“In that moment, I knew exactly what she was talking about–she was talking about access to opportunity that would otherwise change the trajectory of her life,” said Hayes, who grew up in public housing in Waterbury. “That resonated with me. That was me.”

In a statement released Wednesday, Harris said she is grateful for Hayes’ backing.

“I’m so proud to have Jahana’s support in this race,” the senator from California said. “As a teacher and working mom, Jahana understands first-hand that our families are looking for leadership to solve the challenges that keep them up each night.”

Harris also said Hayes “has stood in front and lifted up our nation’s future leaders and was recognized as a champion not only in the classroom but for the residents of Connecticut.”

According to polls, Biden is still considered the front-runner in the crowded field of Democratic candidates for the White House.

But the former vice president’s popularity has fallen, and Harris’ has risen, since last week’s Democratic debates.

A Quinnipiac University poll released on Tuesday said “after Democratic presidential contenders duked it out over two nights of debates,” Biden scored his lowest number yet in the Democratic primary race with 22 percent of the support of Democrats and “Democratic leaners,” virtually tied with Harris who had 20 percent of the vote.