Tong vs. Trump, the case of an activist AG 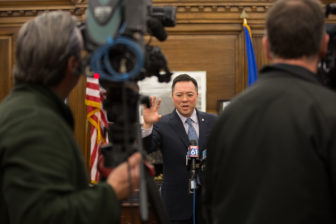 It was shortened by a holiday, but Connecticut’s attorney general, William Tong, still managed to cross swords twice with the Trump administration last week. He sued the Environmental Protection Agency on Monday and declared victory Tuesday in the fight to stop the Commerce Department from including a citizenship question in the 2020 census.

Tong, a Democrat who ran last year on a promise to stand as a “firewall” between Connecticut and the policies of Donald J. Trump, has fought the Republican president and administration on the census, abortion, pollution, overtime protections for workers, payday loans, collective bargaining, student loans, arctic drilling, and the national emergency on immigration.

Since taking office on Jan. 9, Tong has confronted Trump in one way or another an average of more than three times a month, often by the simple act of signing onto to a multi-state comment letter in an administrative proceeding. Other times, he has joined multi-state suits as a plaintiff or intervenor.

“As that problem continues that means a lot of these fights devolve to the states,” Tong said.

There is nothing new about the emergence of state attorneys general as a coherent legal and regulatory force, challenging federal agencies over actions and inaction and presidents over the extent over executive authority.

Twenty red-state attorneys general sued to overturn the Affordable Care Act, the signature accomplishment of Barack Obama. When Trump took office and refused to defend it, 13 blue-state AGs intervened to defend it. Among them was Tong’s predecessor, George Jepsen.

The case continues under Tong, as do others. Between the administrations of Tong and Jepsen, Connecticut has filed 44 amicus briefs in cases involving the federal government since Trump took office and has sued in 29 others. 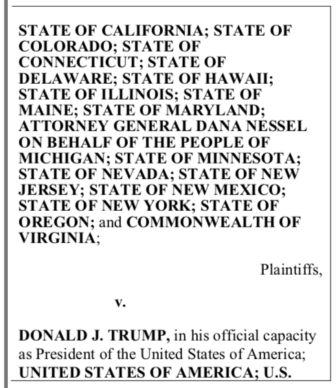 The caption in a challenge to Trump over the border wall.

Not all challenges of the federal government involve AGs of one party and a president of the other. Environmental cases cross party lines.

“Geography plays into it,” Jepsen said.

But so do politics and ideology. Democrats made net gains of four states in attorney general races in 2018, giving them control of the legal offices of 27 of the 51 states or territories with attorneys general. Even before the mid-terms the state AGs had offered a legal resistance to Trump’s deregulatory approach to energy and the environment, filing 38 lawsuits.

Tong said there are political aspects in many of the fights with Trump, but his threshold for involvement is legal, not political.

“Any action that we take, we take not because it is partisan,” Tong said. “We take because there is a direct impact on the people of the state. That’s the only standard. It has to be first and last, always defensible and compelled on that ground.”

Conservative Republicans in the General Assembly said Tong cannot meet that standard in one of the earliest suits he joined: A challenge by 16 states in February, his first full month in office, of Trump’s declaration of a national emergency, a step toward bypassing Congress and building a border wall.

Rep. Vincent Candelora, R-North Branford, said, “This is all purely a political football.”

“That doesn’t impact Connecticut at all. Why are you involved in that?” said state Rep. Craig Fishbein, R-Wallingford. “It’s many thousands of miles away.”

Fishbein contrasted that with Tong joining a suit that objects to the census asking about citizenship, a query that Connecticut and other states say would intimidate non-citizens and produce an undercount in urban areas, costing them lost federal revenue.

The states prevailed at the Supreme Court, and the Trump administration announced it would drop its push for the citizenship question, though the Justice Department reversed course again last Wednesday. Whatever one thinks about the case, Fishbein said the census is an issue in which Connecticut had a clear interest.

Tong defended his participation in the case filed to block the border wall, saying Trump wanted to illegally redirect funding for the project, taking away from other needs — some of which could impact Connecticut.

“The president is refusing to listen to Congress, so we took it to the courts — and it’s being led by state attorneys general and the Sierra Club,” Tong said. “Congress said no, and it’s unconstitutional for him to use that money to build a wall he is not authorized to build. It is part of a reign of terror.”

Connecticut is a leader in some multi-state litigation, most notably related to clean-air claims and a massive national investigation into price-fixing by manufacturers of generic drugs. But Tong said the state is lending its support in most of the challenges to Trump, with larger states taking the lead and bearing the burden.

New York, for example, led the challenge to the Commerce Department over the census. California is lead on the border case. Tong said he will continue to involve Connecticut in cases against Trump. In a lawsuit he filed last week against the EPA over lax regulation of asbestos with other states, California and Massachusetts are bearing the burden.

Jepsen declined to join lawsuits when the facts in Connecticut did not give him legal standing. When Trump banned immigration from Muslim-dominated countries, there was no obvious state interest, such as UConn professors being denied admission to the U.S., he said.

But Jepsen said nothing should bar Tong or any attorney general from speaking out on matters of public importance, including filing amicus briefs, even if the state has no standing to sue.

“You’re an advocate for the broader public interest,” Jepsen said. “It’s appropriate to speak out when you don’t have a legal hook.”