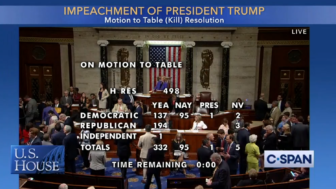 Washington – Every member of the Connecticut delegation in the U.S. House of Representatives voted Wednesday to block from a vote a resolution to begin impeachment proceedings against President Donald Trump.

Even Rep. Jim Himes, D-4th District, who said last month the time had come for the House to open an impeachment inquiry, voted to table the resolution.

Democratic Rep. Al Green of Texas, the sponsor of the resolution, sought to impeach the president over his tweets against four freshman House Democrats, all women of color, and other comments Green and others denounced as racist.

“I think this is an enough-is-enough situation,” Green said.

His failed resolution said Trump is “unfit to represent the American values of decency and morality, respectability and civility, honesty and propriety, reputability and integrity.”

Himes said Green’s impeachment resolution would have ushered in a too-swift process that did not allow for time to sell the public on the case against Trump.

“Weeks ago, I came out in support of beginning an impeachment inquiry to look into possible high crimes and misdemeanors by President Trump,” Himes said. “Today’s impeachment motion by Representative Green would have moved directly to the Senate and skipped the vital step of a House investigation which would bring all of the facts in front of the American people.”

He also said “I believe the public investigation and fact-finding are essential to this process and therefore voted against moving forward without first making the case to the public.”

After the vote, Trump tweeted the “United States House of Representatives has just overwhelmingly voted to kill the Resolution on Impeachment.”

“This is perhaps the most ridiculous and time consuming project I have ever had to work on” the president tweeted. “Impeachment of your President, who has led the Greatest Economic BOOM in the history of our Country, the best job numbers, biggest tax reduction, rebuilt military and much more, is now OVER. This should never be allowed to happen to another President of the United States again!”

It was Green’s third attempt to get a vote on articles of impeachment against Trump. The first two were rejected by even larger margins. The vote on the last one, held on Jan. 19 ,2018, was 355-66.

But this was the first time a Democratic-led House has been confronted with a vote on impeachment, and it comes a week before special counsel Robert Muller is scheduled to testify before two congressional committees.

Although more Democrats support Trump’s impeachment and the movement continues to grow, House Speaker Nancy Pelosi balks at beginning the process since the GOP-led Senate is unlikely to consider any charges the House might send to that chamber. Pelosi believes continued oversight of Trump and his administration is the wiser course.

“We have six committees that are working on following the facts in terms of any abuse of power, obstruction of power, and the rest, that the president may have engaged in,” Pelosi said Wednesday. “That is the serious path we are on.”

“We could have used this floor time to address the humanitarian crisis on the southern border or lower prescription drug prices for American families. Instead, we had to deal with an irresponsible and hostile vote against the president,” said Republican Whip Steve Scalise, R-La. “The widely-bipartisan result of today’s vote proves that even Democrats are coming around to see the absurdity of impeachment.”