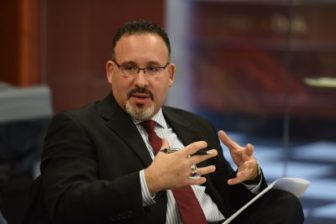 Miguel Cardona, assistant superintendent in Meriden, is expected to be appointed soon as the state’s new education commissioner.

The State Board of Education is scheduled to vote Thursday on the governor’s selection of Miguel Cardona, the assistant superintendent in Meriden, as state education commissioner.

The vote comes even as some education advocates continue to react with surprise and — for some — disappointment at the governor’s sudden decision not to hire Bloomfield Superintendent James Thompson.

Thompson, 72, who has 50 years experience in education, was offered the job in a letter dated July 8 by the governor’s chief operating officer, Paul Mounds Jr., who wrote that he was pleased to offer Thompson employment as the state commissioner of education.

But Mounds, who is also the governor’s liaison to the education board, noted that the letter specified that “this agreement is valid upon your recommendation for Commissioner by Connecticut State Board of Education.”

For that reason, Mounds said, the offer was not a definite arrangement and was rather an invitation to negotiate the details of the hire, including salary and other factors.

Mounds said those details had to be hammered out before Gov. Ned Lamont’s choice for commissioner would be forwarded to the State Board of Education for a vote. However, Mounds said, as conversations occurred last week with Thompson “concerning the roles, responsibilities and potential salary” to become commissioner, it became clear that the discussion over salary was not moving toward agreement. The salary offered in the letter was $192,500.

Sources close to the selection process also say that Thompson wanted to bring staff members with him and that this was also a sticking point.

When it appeared late last week that an agreement would not be reached with Thompson, sources say, the governor’s staff moved on to consider Miguel Cardona, 44, one of three finalists forwarded to the governor by the State Board of Education in late June.  Cardona, who is praised by educators who have worked with him and is bilingual, is expected to be the first Latino state education commissioner. 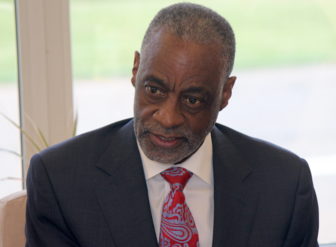 Don Harris, an African American member of the State Board of Education and chairman of the Bloomfield Board of Education, said, “I’m just feeling very bad for James and for the state of Connecticut and for the African American race. It was the most humiliating, disrespectful way that somebody could ever be informed and James deserved much better.”

Thompson was informed Tuesday by the governor’s office that he would not be selected as commissioner.

“I’m feeling for the man,” said Harris. “He had plans. He had been talking and working and planning about just how he was going to do this job. Just to have it snatched away. He deserves better.”

Harris said he would “reserve comment” on how he will vote Thursday.

“I don’t believe it will be a unanimous vote,” he said.

An education advocate who asked not to be named said he saw both Thompson and Cardona as strong candidates. But, he said, “this was an atrocious way of handling James. It was an abominable process.”

Robert Villanova, director of the executive leadership program at the Neag School of Education at UConn, said that he has worked with both Thompson and Cardona and talked with them about their plans if selected as commissioner.

Villanova said Thompson is a “longtime colleague with an unbelievable reputation and an inspirational leader in Hartford and Bloomfield.”

Cardona was a student of his, Villanova said, and an “exceptional leader” who is a “talented young guy, who has done remarkable work in Meriden.”

When he heard that Cardona would be the next commissioner, Villanova said he was “surprised” because the expectation had been that Thompson, with his long experience, would get the job. He said he feels badly for him, but added “in the long run,” the state “can’t lose with either appointment.”

The road to a new state education commissioner has been a long one. Mounds said that in January, Lamont told Thompson that he was the preferred candidate for the job, but noted that a process had to be followed before the governor could nominate his choice to the legislature.

In this case, the board embarked on a search for a new commissioner starting in March despite hearing that Thompson was the governor’s preferred choice. Several weeks ago, the board forwarded three names to the governor as finalists for the position. Those contenders included Thompson, Cardona and Wallingford Superintendent Sal Menzo, sources say.

Allan Taylor, chairman of the State Board of Education, said board members were supportive of all three finalists. He said the finalists were not rank-ordered.

Although the board had been informed that Thompson was the governor’s pick among the finalists, they were told earlier this week that the plan to hire Thompson had derailed and the governor was instead choosing Cardona.

Earlier this year, a member of the State Board of Education criticized the process for selecting a new commissioner, calling  it “disingenuous.”

Joseph J. Vrabely Jr., whose term on the board ended in March, said in January that he thought the process should be changed to simply let the governor select the commissioner, as is the case with other state agencies.

Vrabely said in the two or three times he’s been involved in the process, the governor has had a preferred candidate and a liaison on the Board of Education search committee who actively participates in the process.

“It seemed to be unlikely that the committee would not select the person who was aligned with the governor,” Vrabely said. “They really ought to change the statute and just let the governor appoint the commissioner.”

The current state statute governing the selection of a new commissioner was implemented in 2007. Before then, the State Board of Education appointed education commissioners.