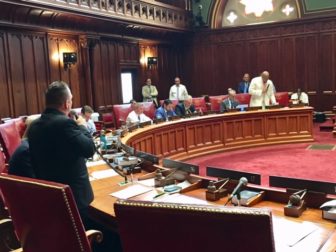 The measure passed 30-1 in the Senate and 93-35 in the House, where a majority of Republicans opposed the bill, primarily over a provision that will raise the reimbursement rate for renovations to several Hartford schools from 80 percent to 95 percent.

Local school construction in Connecticut is partly reimbursed by the state on a sliding scale based on a community’s wealth, and the bill approved Monday provides $160.5 million to pay the state’s share of eight projects in seven communities.

The rates range from 25.36 percent for alterations to two high schools in Fairfield to 78.93 percent for new construction at Bassick High School in Bridgeport and 80 percent for equipment at the Middletown High School Vo-Ag Center.

The bill raised to 95 percent the maximum reimbursements that will be allowable for renovations planned in Hartford for the Martin Luther King Jr. Elementary School, the Burns Latino Studies Academy, Bulkeley High School. Other Hartford projects submitted for state review before June 30, 2022 also will be eligible for the higher reimbursement.

“The reason Hartford got 95 percent for those schools — beyond the fact, like many cities, we struggle financially — Hartford closed schools,” House Majority Leader Matt Ritter, D-Hartford, said in an interview after the debate.

By closing rather than renovating at least four schools, the city is saving the state money it would have been required to pay Hartford, Ritter said.

House Minority Leader Themis Klarides, R-Derby, said after the session that legislators were wary about changing the rules for Hartford so soon after the city was helped with a debt bailout.

The bill also establishes a special reimbursement rate for emergency repairs to the Birch Grove Primary School in Tolland. The school’s foundation is contaminated with pyrrhototite, a mineral that expands when exposed to groundwater and causing massive cracking.

The reimbursement will be 89 percent for repairs and 100 percent for portable classrooms needed during reconstruction.

“It didn’t do what we really wanted it to do,” said Sen. Doug McCrory, D-Hartford, the co-chair of the Education Committee.

McCrory said the program reimbursed wealthy communities for building schools that moved students around their communities, something that could be done by redistricting. In addition to the West Hartford magnet school, Greenwich was among the communities that filed for a diversity school, he said.

Under the new legislation, instead of receiving 80 percent reimbursement, communities would receive the town’s standard rate which ranges from 10 percent to 70 percent for new construction, depending on the town’s wealth, plus an additional 10 percentage points.

Sen. Rob Sampson, R-Wolcott, was the lone voice in the Senate speaking out against the measure. He said the 80 percent policy was “a significant incentive that might make towns actually attempt to do that. This policy is going to tell those smaller towns that you are only going to be increased 10 percent. I don’t know if this is the right direction that we we want to be headed.

“I don’t know anyone’s position on the subject of diversity [in] schools, but if you think that’s a good idea, I don’t know how you could support this … because this policy is a disincentive to increasing the diversity school program in the state.”