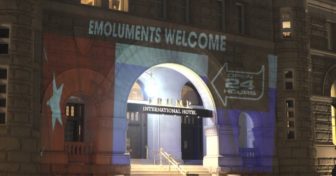 Activists projected the words “Emoluments Welcome” on the facade of the Trump International Hotel in Washington in May 2017.

Washington – Sen. Richard Blumenthal’s legal challenge of President Donald Trump alleging the president is improperly profiting from his position has taken more turns than a doorknob.

The latest twist in the case, filed in 2017, has put on hold 37 subpoenas to Trump businesses seeking information about the president’s finances and financial ties.

And on Monday, a federal court in Washington D.C. also asked both sides in the case to submit new briefs in the case.

The courts are in uncharted territory in this case and neither side can be sure of the next ruling in this protracted legal battle.

Meanwhile, no side can claim victory.

The Democratic lawmakers have been able to keep the case alive long enough to win a court decision that they have standing to sue. The Justice Department, which is defending Trump, have been given another chance to ask an appeals court to dismiss the case.

Blumenthal is the lead plaintiff among 200 Democratic lawmakers who sued Trump, in a case known as Blumenthal v. Trump, arguing that Congress has the right to approve — or withhold — consent before the president accepts payments or benefits from foreign governments.

The case is based on the foreign emoluments clause written into the U.S. Constitution by the founding fathers, who did not envision Trump but did worry about the activities of a businessman-president.

Trump’s decision to keep his stakes in his global businesses raised the question of whether he is violating that clause, which says “no Person holding any Office of Profit or Trust under them, shall, without the Consent of the Congress, accept of any present, Emolument, Office, or Title, of any kind whatever, from any King, Prince, or foreign State.”

“The case presents a number of very novel and unprecedented questions because no president has flaunted the emoluments clause as Donald Trump has done,’” Blumenthal said.

To Blumenthal, Trump is unconstitutionally enriching himself while in office.

“(Foreign entities) are buying his condos, staying in his apartment building and his hotels,” the senator said.

Last week, the U.S. Court of Appeals for the District of Columbia Circuit sent the case back to the U.S. District Court judge handling the lawsuit for another look at the untested separation-of-powers issues.

It also asked the lower court judge, Emmet Sullivan, to review more carefully his decision last month that the case could move forward pending the Justice Department’s request for an expedited appeal.

Justice Department lawyers had asked Sullivan to take the unusual step of halting proceedings in the case to allow them to appeal the judge’s previous rulings to the appeals court.

The DOJ lawyers argued an interlocutory appeal was in order because of the “exceptional circumstances” of the case. They said the discovery process, which is intended to gather information about Trump’s personal and business finances, would “distract the president from his official duties.”

After the D.C. Circuit issued its order, Sullivan promptly put the responses to the 37 subpoenas he issued to Trump businesses on hold. The Mar-a-Largo Club, Trump Tower in New York City and the Trump hotel in Washington D.C. were among the entities that received court subpoenas.

And on Monday, Sullivan asked for new briefs in the case from both sides. Sullivan gave the Justice Department a July 29 deadline and said the Democratic lawmakers, who are represented by the Constitutional Accountability Center, must respond by Aug. 5.

“Because every President before Donald Trump has respected the foreign emoluments clause, this case presents questions that the courts haven’t previously been called upon to answer,” said Constitutional Accountability Center President Elizabeth Wydra.

She said the D.C. Circuit’s decision to remand proceedings to the district court to reconsider its decision not to allow an early appeal is “understandable.”

However, both Wydra and Blumenthal say the courts should move expeditiously to resolve all legal questions. There’s a chance the suit could drag on past the 2020 elections.

“The hope is that the courts will act quickly to avoid Donald Trump from running out the clock,” Blumenthal said.

The Justice Department did not respond to a request for comment on the case.

The emoluments case has not stopped the president from promoting his properties or mixing state and personal business.

For instance, the  Trump administration will host the leaders of the world’s most powerful economies for the G7 summit next year and would like to do so at Trump National Doral, the president’s 800-acre golf club in Miami.

“It would have been easy for Trump to divest himself of his properties,” Blumenthal said. “Then there would be no emoluments case.”