A letter issued last month by accreditors about the merger the state’s 12 community college into a single statewide institution has prompted a wide array of interpretations from faculty and others who are divided over the controversial plan.

Longtime critics of the merger such as Lois Aime, director of education technology at Norwalk Community College, said it’s “clear that our accrediting body is expressing serious concerns with nearly everything the system has been doing over the past year.” 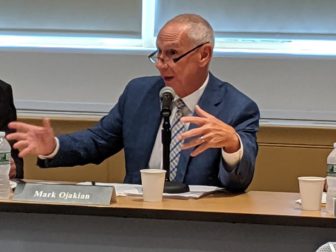 Mark Ojakian, president of the Connecticut State Colleges and Universities system, explains budget details to the Board of Regents at a recent meeting.

Aime, who is also president of the Norwalk Community College Senate, said accreditors at the New England Commission on Higher Education (NECHE) appear “to be putting the system on notice that it cannot sacrifice the educational needs of the current generation of students to build the bureaucratic structure of the proposed future single college.”

“I don’t see it as an endorsement. I don’t see it as a rebuke,” said Lugo, who is also vice-chairman of the Faculty Advisory Committee and a faculty representative to the Board of Regents for Higher Education. “I see it as saying ‘here’s what you need to do to make this happen.’ I think if they saw it as an impossible task, they would have said that.”

The six page letter, which was issued in July in response to the progress update submitted by the Connecticut State Colleges and Universities in April, doesn’t make negative or positive pronouncements  about the plan. Instead it reiterates goals and policies, provides guidance and cautionary comments, and requests additional information in certain areas.

Barbara Brittingham, president of NECHE, said she wouldn’t characterize the letter “as either positive or negative. I think it’s meant to be guidance.

“What this is is feedback,” Brittingham said. “What the commission is trying to do along the way is to say, here’s what we see, here’s what else we’re going to want to know.”

CSCU President Mark Ojakian’s “Students First” program, as it is called, was shaped as a way to save money and improve student experience by sinking savings into faculty and staff who work directly with students. The plan would retain all 12 college campuses, but would centralize management. Ojakian’s staff has estimated that $23 million would be saved.

With the state’s investment in the system on the decline and student enrollment lagging, Ojakian and the Board of Regents for Higher Education, which oversees CSCU, have said repeatedly that such structural change is needed if the system is to remain solvent.

The merger would not be completed until 2023, but the system has already hired three regional presidents at $220,000 each to help oversee the system.

Last year, the CSCU presented a plan to the accreditors that would have consolidated the 12 colleges in a much tighter timeframe, with the merger occurring  in July, 2019. The accreditors did not approve the plan for a statewide Community College of Connecticut in April, 2018,  saying the commission was not persuaded that plan was “realistic” because of the timeline, the magnitude of the change, and the  “limited investment” in the endeavor.

In its July letter, which was signed by David Quigley, chairman of the commission and provost at Boston College, CSCU leaders were asked to provide more specifics on a variety of topics by spring 2020, including more details on how a statewide community college would be organized and governed.

“While we understand that there will be an academic administrator on each campus and a chief academic officer for the merged institutions,” the letter read, “to date the Commission has not seen plans to establish a centralized academic administration office of sufficient capacity to support the twelve campuses, dozens of degree programs and projected enrollment.”

The letter also asked for more information about how the new institution will provide faculty with the “primary responsibility” for the curriculum and with a voice in educational matters. “While the Commission prescribes no particular means of accomplishing this requirement, we note the inherent complexities of developing … a governance system involving faculty from twelve campuses.”

NECHE also said in its letter that it looks forward to an update on how the new institution will ensure consistency in learning outcomes for academic programs taught at multiple locations.

The commission also said it would like information on how the system plans to save money while also maintaining or improving services for students, and how the three regional presidents, all of whom started July 1, will function before and after the proposed merger.

David Levinson, former president of Norwalk Community College and now a presidential fellow in the CSCU central office, said that while some might see the letter as reflecting negatively on the CSCU plan, he doesn’t view it that way.

“I think it lays out the areas where we need to do more work. It provides a very good template, guidance for where we need to go,” said Levinson, who sat on the accrediting commission for six years. “My read is, it shows the challenges ahead but also was affirming of where we are headed.”

While acknowledging that the letter was not a green light on the plan, Levinson said “given the way the commission does things, if it felt there was no hope, they wouldn’t say we look forward to another progress report in April [2020]. If things were at a stage where they felt there’s no way possible this is going to meet the accreditation standards even by the year 2023, then they would have really raised the red flags.”

Levinson said he thinks the commission is saying “that the focus needs to be on what we deliver as a product for students.”