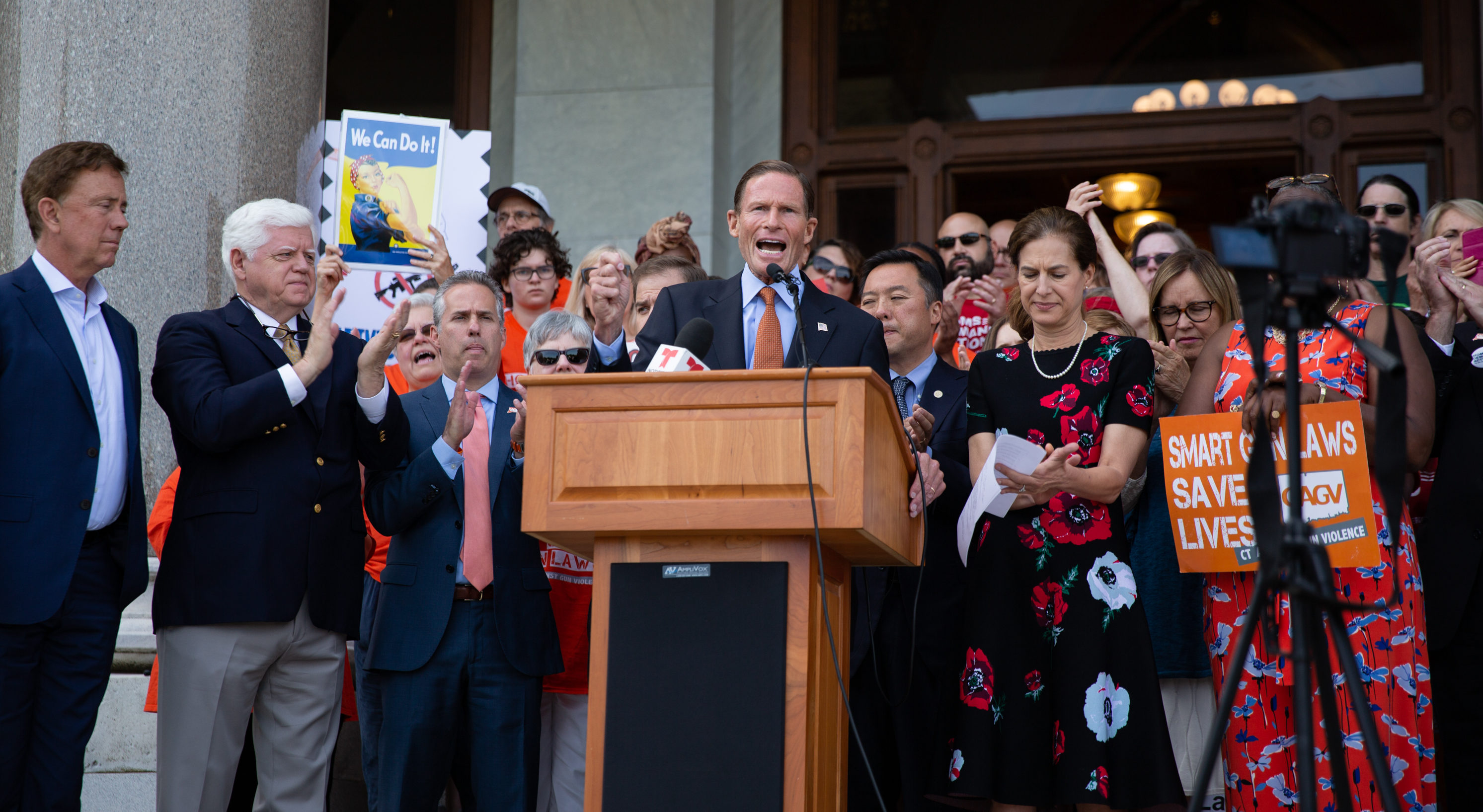 Sen. Richard Blumenthal began his remarks by saying “We are here to talk, but we have run out of words.”

Connecticut Democrats, led by Gov. Ned Lamont, rallied on the Capitol’s north steps Monday for stronger federal gun control measures in the wake of last weekend’s mass shootings in Texas and Ohio in which 31 people were killed and scores more were injured.

Democrats took aim at President Donald Trump, accusing the Republican president of disseminating hate speech against immigrants and minorities that fueled the actions of the shooters, and U.S. Senate Majority Leader Mitch McConnell for refusing to call a vote on the universal background check bill that has already cleared the House of Representatives.

Democrats also urged voters to cast ballots against Republicans who do not call for stronger gun control measures like nationwide bans on assault weapons and high-capacity magazines.

“We have almost as many guns in this country as we have people,” Lamont told the crowd — estimated at 250 by Capitol police — gathered for the mid-day rally. Connecticut’s strict gun control measures — enacted after the 2012 shooting at Sandy Hook Elementary School in Newtown — are a national model, but not without limitation, the governor said.

All it takes, Lamont said, is another state with weak gun laws and an offender still can obtain a firearm there, and then carry it secretly into Connecticut. “We can take the lead in Connecticut but we can’t do it alone,” he said.

“Guns — guess what — cross state boundaries,” U.S. Sen. Richard Blumenthal added. “We are at the mercy of the state with the weakest gun control laws.”

Both Blumenthal and U.S. Rep. John B. Larson, D-1st District, urged McConnell to call the Senate into session to adopt the background checks measure.

“To my colleague Mitch McConnell, lead or get out of the way,” Blumenthal said, as the crowd booed and shouted “Moscow Mitch.”

As the politicians took turns at the microphone, those in the crowd — some of them mothers with their young daughters fidgeting nearby, snacking on Goldfish crackers and sporting pink hair bows — spoke of the anger and frustration they feel as one mass shooting follows the next. 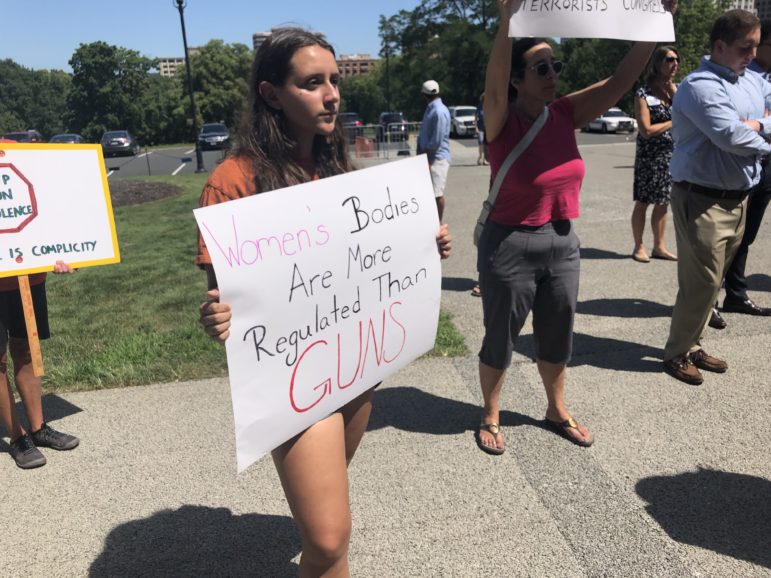 Julia Rubio, a 16-year-old from Guilford High School, attended the rally carrying a sign that read: “Women’s bodies are more regulated than guns.”

Rubbo said she was inspired to attend the rally by the accidental shooting death of Guilford teen Ethan Song last year. “We’re all trying to make a change, but nobody’s listening,” she said. “And they need to start.”

As members of the crowd waved signs that read “Not One More” and “Stamp Out White Supremacy Terrorism,” Connecticut Attorney General William Tong said he struggled whether to tell his children about the shootings in El Paso, Texas and Dayton, Ohio over the weekend.

“They’re growing up in a world driven by hate and white nationalism,” he said, calling the shootings “the product of hate and cruelty.”

Tong said “this is what happens when you call immigrants — like my parents — vermin, animals.”

The president has tweeted repeatedly about the threat immigrants pose to the United States, calling them an “invasion.” During a May rally in Florida, the president talked about border control agents trying to stop migrants from crossing the border illegally and asked the crowd, “How do you stop these people?” When someone in the crowd shouted “Shoot them,” Trump laughed and responded, “That’s only in the [Florida] panhandle, can you get away with that statement.”

And last month the president tweeted that four minority congresswoman, known as “the Squad,” should “go back” to the “totally broken and crime infested places from which they came.” All four of the lawmakers are U.S. citizens, and all but one was born in this country.

“Shame on him,” said Po Murray, chairwoman of the Newtown Action Alliance. “His racist rhetoric has fueled these mass shootings.

Trump also has linked the debate over gun control measures with his call for tougher immigration laws.

“The people who are committing these crimes are American citizens and they are armed with AR-15s,” said Jeremy Stein, executive director of CT Against Gun Violence. 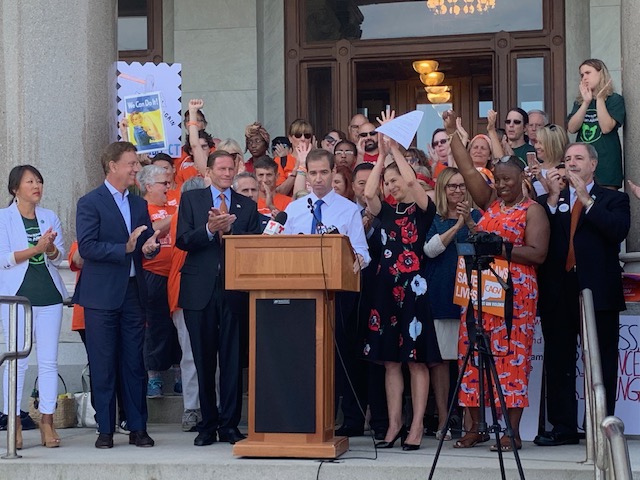 Hartford Mayor Luke Bronin got a loud round of applause when he said “Moms Who Demand Action has more members than the NRA.”

Hartford Mayor Luke Bronin took aim at the president’s assertion that a lack of access to mental health treatment is the primary cause behind the escalating gun violence in the U.S.

Bronin said the nation should be investing more in mental health, as well as programs that lift its impoverished urban centers out of poverty.

But none of these investments, he added, can replace the absolute necessity of imposing tougher gun control measures and stopping hate speech in national politics.

Connecticut has no Republicans within its congressional delegation and no GOP state officials took part in the rally.

Romano said he agrees with Trump on the need to impose the death penalty for heinous crimes such as this past weekend’s shootings, adding “I think we need to have a deeper conversation about mental health.”

When asked whether Connecticut Republicans should support tougher gun control measures at the national level, Romano said “I’m a believer in the 2nd Amendment” to the U.S. Constitution. “I’m not going to take away the choice of someone in how they defend their home and their family.”

“What happened in Dayton and El Paso are despicable acts of terrorism,” said state Senate Minority Leader Len Fasano, R-North Haven. “My heart breaks for the family and friends of all the victims. This violence should be condemned and our nation should not let hate divide us.”

Fasano added that “For certain Democrat politicians to stand up today and turn a rally against gun violence into a partisan, political attack on Connecticut Republicans is disturbing and shows their true colors. Some members of our Washington delegation would rather have a photo op than get to work negotiating policies to help our nation. When it comes to many issues, they would rather fight and play politics than work toward bipartisan solutions. These are the same Washington Democrats who have failed on immigration, failed on the opioid crisis, and failed on health care.”

But Democrats warned that Republicans who fail to support tougher gun measures — and even those who fail to speak out against gun violence and hate speech — would be held accountable by voters.

“You will be given your walking papers if you’re on the wrong side of this issue,” Blumenthal said.

“The silence on the other side is deafening,” said Lt. Gov. Susan Bysiewicz. “So take a look at who is here and who is not. And remember, your voice is your vote.”