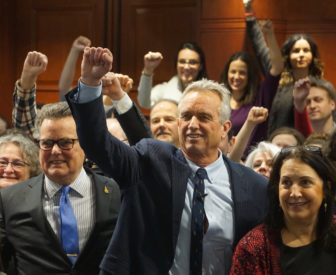 Anne Dauphinais, right, stands next to vaccine skeptic Robert F. Kennedy during his visit to the state Capitol in March.

Five Republican legislators are urging Connecticut’s new health commissioner not to take a position on the effort to repeal the state’s religious exemption to vaccines.

The lawmakers – State Reps. Anne Dauphinais, R-Killingly; Mike France, R-Ledyard; Craig Fishbein, R-Wallingford; Rick Hayes, R-Putnam; and David Wilson, R-Litchfield – sent a letter to Department of Public Health Commissioner Renee Coleman-Mitchell saying it would be improper for her to offer an opinion on the contentious issue.

Democratic legislative leaders have asked Coleman-Mitchell for her input on whether the exemption should be repealed.

“We believe it is wholly inappropriate for the legislators to be seeking your opinion regarding the elimination of the religious exemption in Connecticut,” the Republicans wrote in their letter, dated July 30. “That is a question of constitutional and civil rights law. It is not the charge of your agency to offer opinions on civil rights issues; the state has other agencies that are responsible for those matters.”

“Therefore,” they added, “we implore you to refrain from offering any opinion on the elimination of the religious exemption.”

In June, Democratic leaders in the House and Senate asked the commissioner whether they should move forward with abolishing religious waivers to vaccines. It was the second time they had publicly called for her opinion on the issue. Coleman-Mitchell so far has deflected the requests, saying she would review the inquiries and respond “as soon as possible.”

She declined to comment on the letter from Republicans.

“We did receive the letter you are referencing and have no response to it,” the commissioner said through a spokesman Monday. “We are currently working on a response to the letter on a similar topic from legislative leadership.”

The Democrats, who are planning to revive their quest to curtail the exemption next year, have kept pressure on the commissioner. A review of efforts in New York, Washington and Maine – all of which succeeded in repealing religious or philosophical provisions this year – show those states had the backing of their public health officials. Connecticut lawmakers said they are looking for similar support.

But the Republicans want Coleman-Mitchell to stay out of it. In addition to refraining from the exemption debate, they have asked her not to push for legislation that would increase vaccination rates.

The state’s public health department in May released for the first time its school-by-school assessment of child immunization rates. The data showed 102 schools where fewer than 95 percent of kindergarten students were vaccinated against measles, mumps and rubella – the threshold recommended by the Centers for Disease Control and Prevention.

That touched off a flood of concerns from state leaders, who by then had recorded three measles cases in Connecticut.

Gov. Ned Lamont said the data was “startling” and needed to be addressed.

But the five Republicans, all of whom are members of the legislature’s conservative caucus, say there is “absolutely no threat to public health in the state.”

“Even if there were,” they wrote in the letter, “increasing vaccination rates would not resolve it. … The weight of scientific authority simply does not support the CDC’s recommendations.”

“We urge you to be courageous and stand on the firm ground of science in truth, rather than retreat into the safe trappings of the cave of political pressure,” they said.

The Republicans closed their letter with a quote from Pope Paul VI: “If you want peace, work for justice.”

Dauphinais, a vocal critic of plans to repeal the religious exemption, was active in bringing Robert F. Kennedy Jr., who founded an anti-vaccine organization, to the state Capitol in March. Kennedy delivered a PowerPoint presentation in a hearing room, joined by a half-dozen sympathetic lawmakers and more than 100 parents, on the need for more stringent testing of vaccines before their release, along with his opposition to mandatory immunizations.

“Vaccination rates in our public schools are first, last, and foremost a matter of public health,” he said. “Reason and logic dictate that the Commissioner of the Department of Public Health advise our state on issues involving public health.”

“I find it shocking and irresponsible to claim that there ‘is absolutely no threat to public health’ for over 100 Connecticut schools to have vaccination rates under the recommended threshold by the Centers for Disease Control and Prevention,” Looney added. “We have seen outbreaks of diseases in communities just over the border in New York and around the country.”

Ritter said the letter’s authors will ultimately “have to answer to the voters” about their “ill-founded opinions.”

“It appears to me that you have legislators who believe that vaccinations are junk science,” he said. “They believe they know more than the CDC, and they are incredibly out of step with Connecticut residents on this issue.”