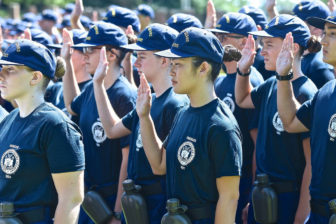 Washington – Two House committee chairmen investigating racial discrimination and harassment at the Coast Guard Academy accused the service on Monday of impeding their probe and demanded two officers appear for interviews before their panels.

U.S. Rep. Elijah E. Cummings, chairman of the House  Committee on Oversight and Reform, and Rep. Bennie Thompson, chairman of the House Homeland Security Committee, said their staff members, as well as staff from the office of Rep. Joe Courtney, D-2nd District, met last week with Coast Guard officials as part of their investigation into allegations of discrimination, harassment and bullying of cadets at the school, as well as racial discrimination.

In a letter Monday to Coast Guard Admiral Karl L. Schultz, the lawmakers said the Coast Guard officials “indicated that pursuant to (Schultz’s) orders, all of the Coast Guard personnel who were present at the meeting were directed to refuse to answer any questions regarding any past events at the Academy involving either faculty or cadets.”

“We are deeply troubled by what appear to be repeated efforts by the Coast Guard to impede our investigation of the handling of allegations of harassment and retaliation at the Coast Guard Academy,” wrote Cummings, D-Md., and Thompson, D-Miss.

The Coast Guard Academy did not have an immediate response to the lawmakers’ letter.

Kurt Colella, dean of the Coast Guard Academy’s Academics Division, and other officials from the school and the Coast Guard were at last week’s meeting with the lawmakers’ staffers.

The lawmakers demanded that Colella and Rear Admiral Anthony J. Vogt, Commander of the Thirteenth Coast Guard District, appear before their committees no later than September 18.

“If either individual fails to appear as requested, we will be forced to consider alternative means to obtain compliance,” the lawmakers wrote, indicating they could use their subpoena power.

The request for the closed-door interviews means questions posed by committee members and staffers, and the answers, will be transcribed. Under such arrangements, witnesses typically are under oath, and could face punishment if found to have lied.

Courtney said Monday he supports the move taken by Cummings and Thompson.

Courtney said members of the Government Oversight and Homeland Security committee have been “screaming at the top of their lungs” for information about racial disparities, gender disparities and bullying of all types of cadets, and have received little response.

“We’ve been at the table with Coast Guard staff at every step of the chronology,” he said. “It obviously did not move the ball forward or move the needle.”

The lawmakers have been investigating the Coast Guard Academy for more than a year.

On June 13, 2018, they requested “all documents, including convening authority memoranda, investigative reports, panel sheets, final action memoranda, and post-investigation talking points, regarding allegations of harassment or bullying made by any student or faculty member at the Academy during the past three years, the results of any investigations conducted to examine these allegations, and the terms of any settlements reached.”

The lawmakers also cited a Department of Homeland Security Office of Inspector General report, released in December, that found that a black, female officer at the academy “was retaliated against on the basis of her complaints, in violation of the Military Whistleblower Protection Act.”

“The OIG’s report also identified ‘potential disparities’ and inconsistencies in the handling of harassment complaints at the Academy,” the lawmakers wrote.

But their investigation of the Coast Guard Academy was initiated much earlier, provoked by complaints of bullying and harassment of minority cadets at the school and by its poor grades on the “Equity Scorecard,” a study by the Center for Urban Education at the University of Southern California that tracks academic data, including graduation rates, by race, ethnicity and gender.

Sens. Richard Blumenthal and Chris Murphy have also looked into complaints of racism and other abusive behavior at the academy.

“I fully support the U.S. House of Representatives’ efforts to exercise its oversight authority of the Coast Guard Academy,” Blumenthal said. “The Coast Guard’s handling of past racial discrimination and harassment allegations at the Academy are deeply disturbing – which is why I have repeatedly pressed the Academy to take action.

Blumenthal also said “I expect immediate, thorough, and transparent steps to change this atmosphere of racial hostility and hold Academy staff and officers accountable for their actions.”