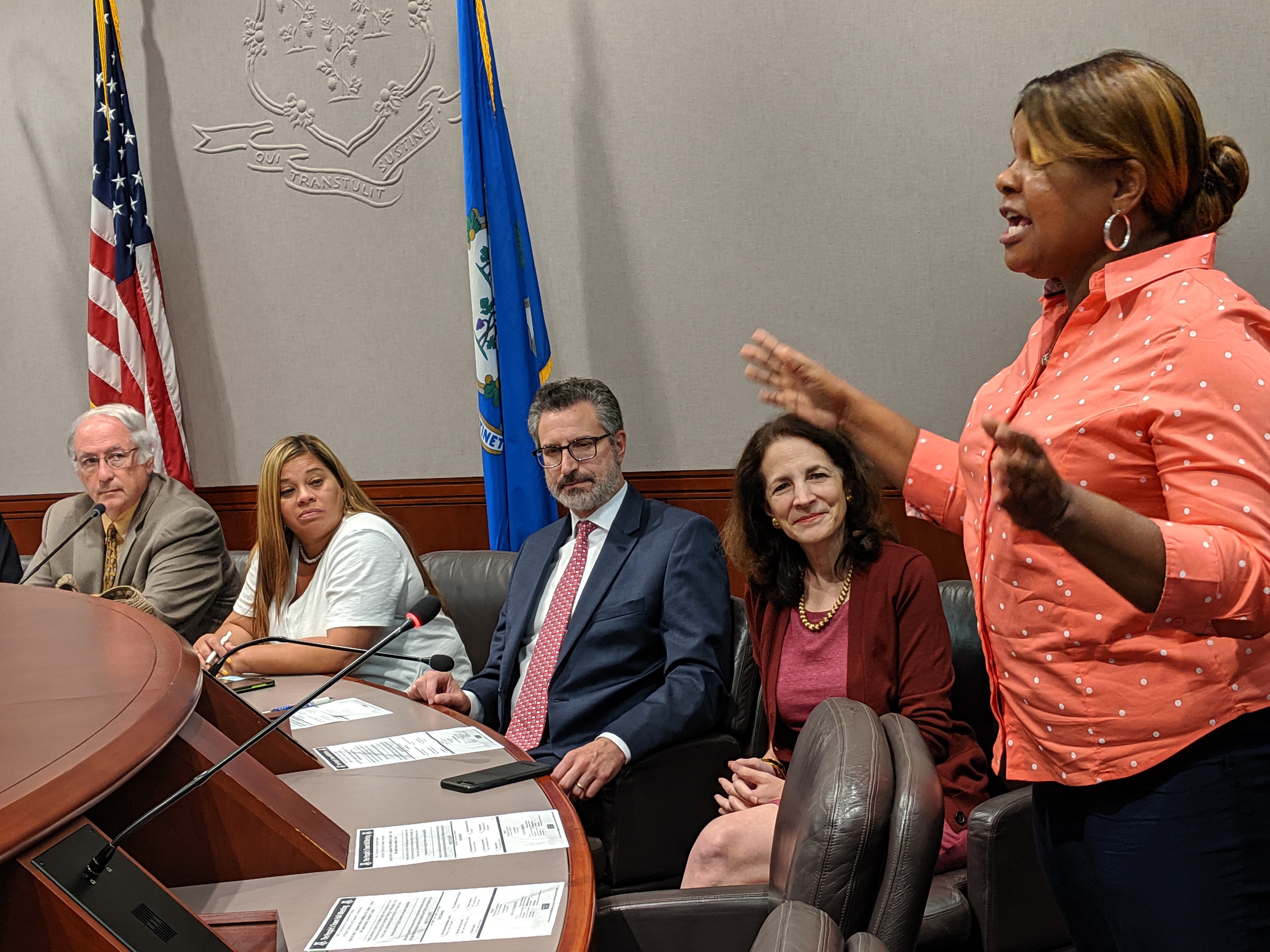 When Gwen Samuel first heard about the Dalio Philanthropies’s five-year plan to donate $100 million to help the state’s struggling public schools, she thought it sounded positive.

“That’s a great thing, there are people investing in our children,” said Samuel, who is the founder of the Connecticut Parents Union, but then she learned more about the state’s plan to match the foundation grant and about controversial provisions in the plan exempting the panel overseeing the partnership from state disclosure and ethics rules.

That’s what drove Samuel, whose organization works with families to protect the educational rights of children, to arrange a “People’s Town Hall Meeting” Tuesday to raise awareness about what she sees as a lack of transparency in state government decision-making and tax dollar spending.

The event drew a couple dozen people to the Legislative Office Building where Samuel had arranged for a representative of the state Freedom of Information Commission, the leaders of an Illinois government watchdog group, state legislators and others to provide information about the partnership and guidance on how to ensure government transparency.

“I wanted to understand how there could be anything private in public spaces with public dollars,” Samuel told the group. “We have to make sure that the rights of the citizens of Connecticut are not only protected, but that the dollars we pay into our government are spent responsibly and that we know how you’re spending it. The days of ostrich head in the sand have to be over if we are going to survive as a state.”

A spokeswoman for Dalio Philanthropies said the organization declined to comment on this story.

Those in attendance asked questions, took notes and expressed concerns about how the partnership had been reached with Dalio and why legislators approved a plan that would commit so many public dollars without full transparency. 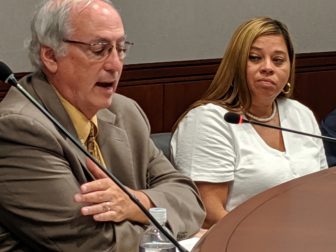 Tom Hennick, public education officer of the Freedom of Information Commission addresses the group. Maria Cordeiro, a Berlin grandmother, is at right.

Thomas Hennick, the public education  officer for the Freedom of Information Commission, explained that the legislation establishing the partnership was part of a very large bill that included the state budget.

“One of the problems with this piece of legislation is that there were no public hearings,” Hennick said. “This is a legislative — I don’t want to call it a tactic … but it’s something that happens.

“We fight this all the time at Freedom of Information because the budget bill or the implementers will pop up with things in it that are against transparency that we never knew … that slide in at the last minute. You talk about the public being engaged, it’s impossible for the public to be engaged if things are done in secret. The need for public hearings on this matter — they are critical.”

Deputy House Minority Leader Vincent J. Candelora, R-North Branford, who criticized the non-disclosure aspects of the partnership during the legislative session, told the group Tuesday that he hopes a bill on the partnership will get raised for a vote in the next session.

Candelora noted that $20 million was budgeted for this year as the state’s share in the partnership, but next year another $20 million will have to be budgeted as part of the five year plan.

“The legislature  is going to need to debate whether they should continue funding this organization,” Candelora said.

Rep. Gail Lavielle, R-Wilton, who is a ranking member of the Appropriations Committee, noted that Republicans voted against the bill containing the Dalio provisions and said she thinks constituents don’t know enough about the partnership. 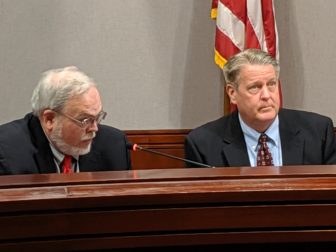 John Kraft, left, and Kirk Allen of the Edgar County Watchdogs in Illinois.

If they did, she said, she thought they would find it strange that “no one really knows” how the money will be used or how the success of the investment will be determined.

“All of that is sort of murky .. no one understands it,” she said. “I don’t think people would react to that very well, but I don’t think enough of them know about it yet.”

Kirk Allen, who is with Edgar County Watchdogs in Illinois, a group that fights for transparency in governmental agencies, said his agency was formed out of necessity.

“It started because we had been lied to,” Allen said. “How many have been lied to by local government?”

At least a third of the hands in the room went up.

Allen said he found it “shocking” that an organization that would be handling $100 million in public funds over five years wouldn’t be subject to FOI rules.

“I think it’s great you have those organizations helping to fund [education] but when public funds come into play, the public has to have access to those meetings,” he said. “When they don’t, they’re not being represented. Their money is being taken and they have no input on how it’s being spent.” 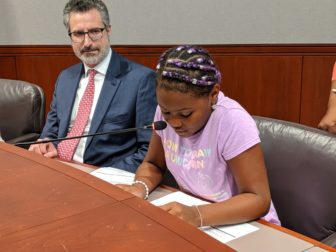 Jazzniqua Marrow, a 10-year old from Meriden, opened the town hall meeting by asking adults to make decisions that help her get a good education. At left is former Meriden mayor, Manuel Santos.

LeeAnn Ducat drove an hour from her home in Woodstock to attend the meeting. “I think it’s a little concerning that the state of Connecticut — or some members of the legislature anyway — is going to such extreme lengths to avoid public scrutiny.”

She said she thinks the partnership should be subject to the state’s disclosure laws so that the public will know how their tax money is spent.