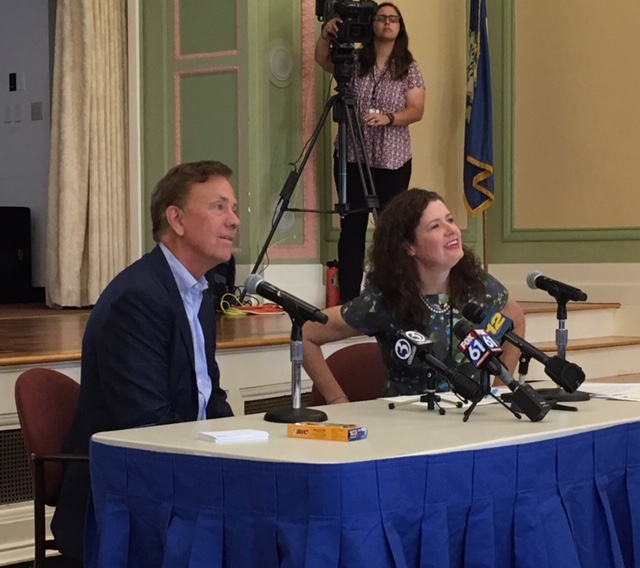 Gov. Ned Lamont signed an executive order Tuesday that he says will advance Connecticut’s momentum on climate change, but he was challenged to explain the state’s continued reliance on natural gas and its slow pace of financing projects that could mitigate the impact of rising seas and extreme weather.

The executive order he signed at a climate forum in Hartford expands the responsibilities and membership of the Governor’s Council on Climate Change and directs the state Department of Energy and Environmental Protection to recommend strategies for a carbon-free energy grid by 2040.

As originally formulated in 2015, the council focused primarily on ways to mitigate the carbon emissions contributing to climate change, while Lamont is asking that it also produce a strategy for how the state must adapt to the consequences — primarily rising seas and more powerful storms.

“While the highest levels of our federal government are refusing to accept scientific facts, we need state governments to unite and address one of the most pressing international problem of our times,” Lamont said. “The effects of climate change are impacting our air, water, health, natural resources, economic, and the quality of life of every current and future citizen of Connecticut. We have an obligation to act now.”

Lamont and Katie Dykes, the commissioner of energy and environmental protection, took questions from a generally appreciative audience of nearly 100 environmental activists, lawmakers and industry representatives.

“Katie reminds me every day that climate change is happening faster than we thought,” said Lamont, who archly referred to climate change as “the band formerly known as global warming.”

But some of the attendees politely questioned if the administration was meeting that obligation.

Representatives of the Sierra Club and Nature Conservancy of Connecticut challenged Lamont about the administration’s embrace of new gas-fired power stations as a bridge to a carbon-free future, as well as a “debt diet” that limits available funds for a long list of local and regional projects proposed to make the state more resilient to climate change.

Samantha Dynowski of the Sierra Club told the governor Connecticut is the only state in the region still promoting the conversion of homes and businesses from oil to natural gas, and she warned that environmentalists are hoping to block construction of a new gas-fired power plant in Killingly.

The recent opening of PSEG’s gas-fired plant in Bridgeport Harbor will allow the retirement in 2021 of a coal-fired plant next door, and a smaller plant planned for Killingly will help the state reliably meet peak demand, Lamont said.

Dykes said the use of natural gas to generate electricity is a bridge to 2040, when the state hopes that the market will be dominated by off-shore wind, solar and other renewables.

“It doesn’t happen overnight,” she said.

David Sutherland, the government relations director of the Nature Conservancy of Connecticut, urged the governor to reconsider his “debt diet,” saying that coastal and riverine communities are ready with projects that could protect property, add public amenities and improve eco-systems.

“I want to join what I assume is a chorus of people saying, ‘I know we have debt diet, but —’ I think it would help immensely if we could loosen even $5 million or $10 million in bonding for some local matching grants for adaptation and resilience projects,” Sutherland said.

Lamont said he has to limit state bonding until he and the legislature agree on a funding source to maintain the solvency of the Special Transportation Fund, which pays for transportation operating expenses and debt service on infrastructure programs. 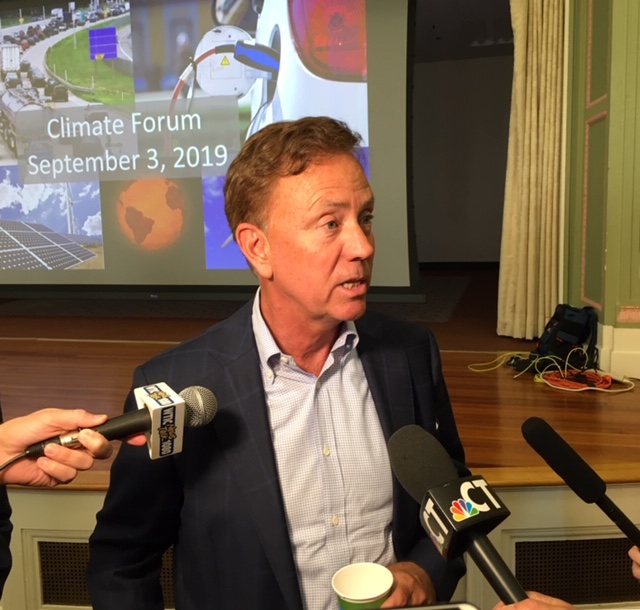 The governor’s proposal for highway tolls was a non-starter in the General Assembly, which means that transportation projects could be competing for bonding funds with a host of other needs, including a backlog of climate resiliency projects that can cost as little as $15,000 and as much as $4 million.

Adam Whelchel, the conservancy’s science director, said in an interview that 490 projects in 39 communities have been identified, ranging from inexpensive rain gardens and swales to multi-million-dollar projects to restore beaches, dunes and other shoreline features that can provide natural buffers to rising seas and create public amenities.

One $2 million project in West Haven would restore the state’s longest public beach, improve wildlife habitat and protect the homes and condominiums behind the beach, he said.

Resilience projects can be expected to save $4 for every dollar spent, he said.

“It’s smart money now. Why pay twice? That’s what it’s all about. So $5 million today is $20 million in avoid costs,” Whelchel said.

Lamont said he is aware of the economics. Only a late shift in the winds during Sandy, a “superstorm” downgraded to a tropical storm when it hit Connecticut, saved electric substations in Bridgeport from being inundated, Lamont said.

The governor agreed that Connecticut must pursue resilience projects, and he thanked advocates for pointing him and his administration in the right direction.

“You keep our eye on the North Star,” he said.

The executive order is Lamont’s third. His first created a “Lead by Example” sustainability initiative that directs state agencies to make their operations greener and more energy efficient.