Murphy: White House has ‘its own ideas’ on guns 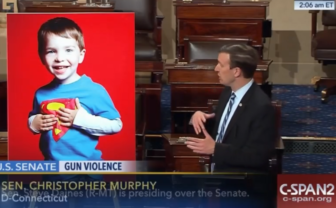 Sen. Chris Murphy displays a photo of Newtown shooting victim Dylan Hockley during his 2016 filibuster to get a vote on a background check bill

Washington – Sen. Chris Murphy on Tuesday said that while he is seeking to have another  conversation with President Donald Trump about a bill to expand background checks on gun buyers, the White House has its own proposals.

With Sens. Joe Manchin D-W.Va., and Pat Toomey, R-Pa., Murphy said he is urging the president to endorse a gun background check bill that was crafted after the slaughter at Sandy Hook Elementary School nearly seven years ago.

Murphy spoke to Trump by phone last month about new gun legislation and has been also in contact with White House staffers, most recently on Monday, about the need to respond to a rash of mass shootings.

Dubbed the Machin-Toomey bill, the legislation Murphy is promoting was a compromise crafted in 2013 aimed at winning the support of moderate Democrats like Manchin and a handful of Senate Republicans. It would have expanded FBI background checks of prospective gun buyers — now limited mostly to those who purchase firearms from dealers — to transactions at gun shows and on the internet.

But the bill would exempt person-to-person sales and transfers of guns, as well as family transactions and loans.

Opposed by the National Rifle Association, which argued that stronger background checks would be ineffective in stopping criminals from purchasing guns or preventing mass murders, the Manchin-Toomey bill failed to win the 60 votes needed to advance in the Senate.

Murphy said the proposal would not meet his goal of universal background checks, but has a better chance of Senate approval than a tougher bill.

“Ideally, I want universal background checks, but I’m willing to compromise,” said Murphy, who in 2016 led a 15-hour filibuster to pressure GOP leaders to allow a vote on the legislation.

Polls show public support is growing, among both Democrats and Republicans, for an expansion of gun background checks.

Even so — and even in the face of a spate of recent mass shootings in El Paso and Odessa, Tex., and Dayton, Ohio — Congress has failed to take action.

The Democratic-led U.S. House of Representatives in February approved two bills that would expend FBI background checks, but they have languished in the Republican-controlled Senate.

Senate Majority Leader Mitch McConnell, R-Ky., said he was waiting for a signal from Trump to help him decide how to respond to the mass shooting.

He may receive that signal soon. McConnell told reporters Tuesday that the White House is preparing a proposal to respond to the “horrendous” shootings last month and that he will withhold judgment on how to proceed until he sees Trump’s plan.

The Connecticut senator also said the president wants a package of proposals.

That package may include some type of “red flag” bill that would allow law enforcement with permission from a judge to temporarily remove weapons from those believed to be a threat to themselves or others.

“He’s got his own ideas, we’ve got our own ideas,” Murphy said.

Seth Ator, who took to the highways near Odessa, Texas and began shooting people with an assault style rifle, killed seven people and wounded 25 others.

Ator had been barred through an FBI background check from purchasing a gun in 2014 because a judge had ruled him mentally unfit. So instead he purchased his weapon in a private person-to-person sale that did not require a background check.