Women and the vote: history with a contemporary edge 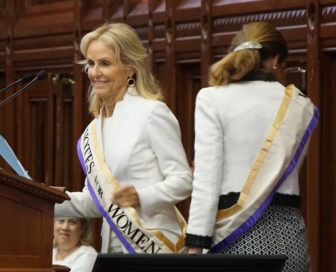 Ann Lamont takes the podium in the House.

Secretary of the State Denise Merrill conceded Thursday the first words spoken by a woman on the floor of the Connecticut House were less than auspicious: “We women want the men in the House to feel that they may smoke just as if there were no women legislators present.”

Merrill was quoting Mary Mather Hooker, the first woman elected to the General Assembly in 1920 after the passage of the 19th Amendment granting women the right to vote. Merrill’s audience in the Hall of the House tittered.

‘They were still trying to be nice and ladies, you know, and make sure the men were comfortable with them in the chamber,” Merrill said. “Well, we don’t quite expect the men in the chamber to carry on as if we’re not here any more — do we?”

With speeches from First Lady Ann Lamont, Lt. Gov. Susan Bysiewicz and a stand-in for Susan B. Anthony, the Connecticut Women’s Suffrage Commission launched a year-long celebration of what Merrill called the first modern grass-roots campaign.

In a bit of early political branding, the suffragists wore white dresses and purple and gold edged sashes with the message, VOTES FOR WOMEN. They staged protests and submitted to arrests and hunger strikes that ended with forced feedings.

“Clearly, they were not shrinking violets, these ladies,” Merrill said.

“You sometimes need to make some noise.”

As a busy venture capitalist who opened her own firm five years ago, Ann Lamont has not been a particularly high-profile first lady, but she is co-chair of the Suffrage Commission. Lamont comes from a world of entrepreneurs and risk takers, and she said the suffragettes were the ultimate risk-takers of their time, pushing boundaries of culture and politics.

“The suffragettes were on what the tech world refers to as the bleeding edge, which becomes the leading edge, and then becomes the standard or the norm,” Lamont said. “And this is what progressives do. They change the world  by daring to do the uncomfortable and unpopular thing.” 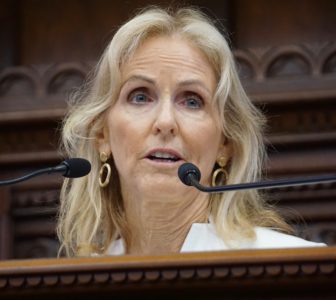 In her own world, Lamont said change has come slowly for women.

“Venture was a small, all-male club, and I was lucky to be admitted to that club very early in my career,” Lamont said, adding that she loved “every minute of it,” helping entrepreneurs. “One thing that I didn’t love was looking around after 30 years and seeing that almost no progress had been made both in terms of the number of female venture capitalists and in the number of female entrepreneurs — which is to say almost none.”

Half the partners in her firm are women, but when she recruits new associates, the head-hunting firms present her with talent pools that are 80% male, requiring her to demand they try again.

“You sometimes need to make some noise,” she said.

Women hold 52% of top jobs in Connecticut’s state government, as measured in terms of politically appointed agency heads and deputies, as well as high-ranking career employees. About 45% of Gov. Ned Lamont’s appointees are women.

The suffrage celebration comes at a time of a widening gender gap in U.S. politics, and it will run into the 2020 presidential campaign. Exit polling in 2018 showed women favoring Democrats in mid-term congressional races, 59% to 40%. The celebration here is non-partisan, but every statewide and congressional office in Connecticut is held by a Democrat. 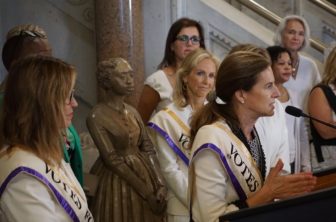 Merrill, a former House majority leader who was elected last year to her third term as secretary of the state, said there is a push in both parties for full political representation by women, even if they split over polices.

“There’s always been politics involved in the women’s suffrage movement right from the beginning,” Merrill said. “Women had to learn how to be political, and there was a lot of discussion about whether they would continue, for example, to still be both abolitionists and suffragists.

“You’re always going to have disagreements around what it means, what does full equality for women mean? I think it’s a healthy debate.”

On Thursday, it meant applause when Bysiewicz gave a shoutout to two Democrats, Rep. Robyn Porter of New Haven and Sen. Julie Kushner of Danbury, for their roles as co-chairs of the Labor and Public Employees Committee in the passage this year of a $15 minimum wage and a paid family and medical leave law.

The General Assembly’s bipartisan Women’s Caucus chose its leaders in January, never the question of setting an agenda acceptable to a caucus with 37 Democrats and 24 Republicans. Twenty of the 61 members are in their first terms.

The 61 women in the House and Senate comprise 33% of the membership in General Assembly, up from 27% last year. Nationally, women didn’t crack 25% of all state legislative seats until 2018.

House Minority Leader Themis Klarides, R-Derby, is the only woman leading one of the four legislative caucuses.