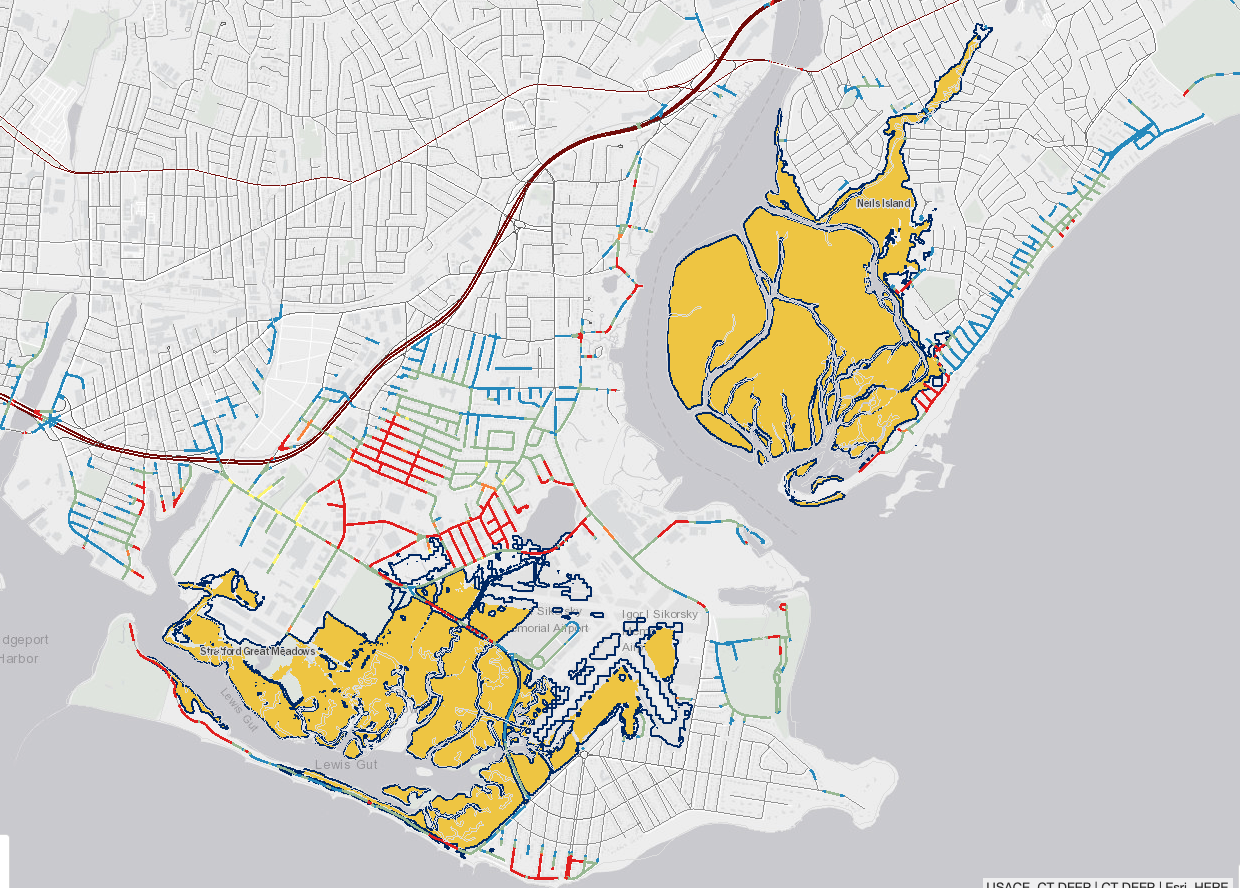 The new viewer shows that in Stratford in 2055 salt marshes (yellow) and the most frequent road flooding (red) – every 30 days – will encroach on shoreline areas including Sikorsky Memorial Airport.

Editor’s Note: This is the first of six stories exploring how Connecticut is grappling with the effects of climate change, one small solution at a time.

SLAMM is one of those wonky acronyms that science types looking at the impacts of sea level rise from climate change like to use. It stands for Sea Level Affecting Marsh Migration.

If you live/work/otherwise spend time on the Connecticut shoreline, you’d be advised to shake off that glazed expression and have a look at a new interactive SLAMM viewer produced by the Department of Energy and Environmental Protection (DEEP) and the University of Connecticut’s Center for Land Use Education and Research. In addition to showing what will happen to the 21 largest tidal marshes in the state as the result of sea level rise, it also shows what that sea level rise will do to shoreline roads.

Spoiler alert – they’re going to have more water on them.

And that’s just tidal flooding. Throw in flooding from storms and you’re talking a lot of wet.

Beyond the ominous red lines on roadways that increase over time on the interactive viewer, DEEP’s number crunching shows non-storm flooding on coastal roads occurred at least every 90 days on a total of 5.75 miles of road in 2010. In 2055, that total is likely to be up to 79.31 miles. More than two-thirds of that flooding would occur at least once every 30 days.

It gets worse, reaching 271.58 miles by the end of the century. See that data and more here.

And while most folks are going to be a lot more worried about whether the roads they use are under water, don’t ignore those marshes. They have a lot to do with whether roads flood.

Salt marshes act like sponges, naturally soaking up water from whatever the source – storms, tides, or sea level rise. They deal with sea level rise in particular by using sediment to build themselves higher or by moving landward.

“It’s a horse race between the Sound and the marsh level and the marsh being able to deal with sea level rise,” said David Kozak, senior coastal planner at DEEP and one of the key players in developing the SLAMM viewer and the research behind it. 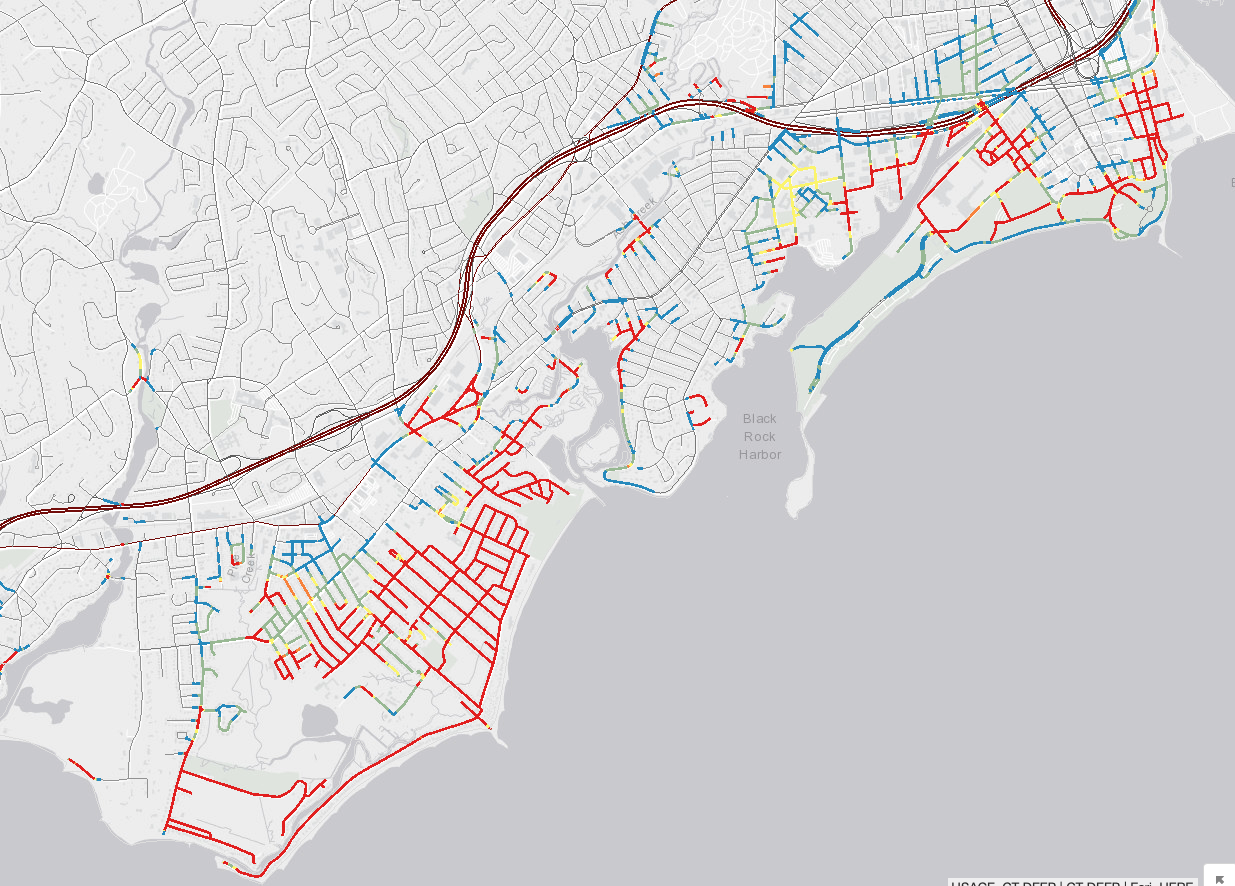 Fairfield Flooding projections in 2085, seen in red, indicate flooding will occur every 30 days. Many homes in this area were elevated after flooding during Superstorm Sandy in 2012, but road flooding could make them inaccessible.

That research shows that sea level rise will convert considerable portions of the marshes from what’s known as high marsh to low marsh. Low marsh is what results when saltwater incursion frequency increases, supports far fewer plant types and loses its ability to soak up as much water.

“There are significant implications to the health of the Sound and significant ecosystem implications,” Kozak said. “The type of marsh is going change to eventually no marsh, to tidal mud flats, to open water.”

See the projections for yourself – which Kozak said use somewhat conservative sea level rise estimates.

The state Department of Transportation, which has the potential to use the viewer as a tool to help assess future road work, calls it a “good start.”

Robert Bell, a director in DOT’s Bureau of Policy and Planning, said the tool still needs some additional information – especially the prediction that jumps from 90-day to 10-year flooding with no intermediate levels. He also said it needs a better definition of what constitutes “flooding.”

“At the moment, it’s not as useful,” he said. “But it does allow us to consider some things.”

Kozak said the viewer will provide an opportunity to think about how to manage the water moving in and out of marshes as DOT and municipalities find they need to rebuild infrastructure around them, including whether to elevate the marshes. It will also help municipalities and DOT make capital decisions.

He also expects pushback from the real estate industry, which worries that predictions of flooding will harm home sales.

“Why not give people complete information so they can make decisions,” Kozak asked rhetorically. “Right down to individual landowners making a decision whether to stay or buy into a road that floods frequently?”