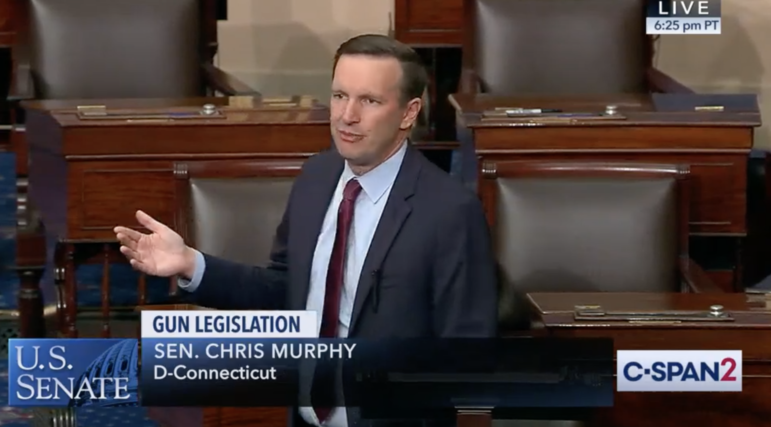 Sen. Chris Murphy told the story of Leo Spencer of Bridgeport as he urged his Senate colleagues to vote on gun control bills. 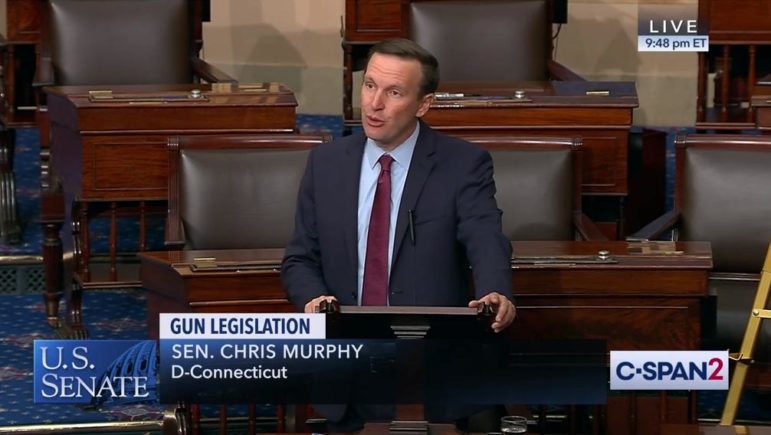 Washington – Saying he is “pulling every lever” to prod the Senate into taking action on gun control bills, Sen. Chris Murphy led fellow Democrats late into the night Tuesday in speeches about the need to respond to gun violence.

Murphy and his colleagues cited statistics, saying 100 Americans are killed every day by guns and that a supermajority of Americans tell pollsters they support expanded FBI checks of gun buyers and “red flag” laws that temporarily seize guns from those deemed a danger to themselves or others.

The 20 or so Democratic senators who took to the Senate floor also spoke of those slain by bullets.

Murphy told the story of Leo Spencer of Bridgeport, who was shot in the head and neck earlier this month while sitting in the passenger seat of a friend’s car.

“His friend drove him to Bridgeport Hospital as fast as he could, but Leo was dead,” Murphy said.

The senator said fear of getting shot is “ruining the brains” of children in Bridgeport and other cities where gun violence is prevalent because it drenches them with cortisol, a stress hormone.

Gun violence also alters the lives of surviving family and friends, Murphy said, and he recalled the shooting that set him on the path to tighten federal gun laws.

“Sandy Hook will never, ever be the same,” he said, referring to the 2012 massacre at Sandy Hook Elementary School.

Murphy also spoke of Neil Heslin, a father of one of the 20 first graders who were killed at school that day. Nearly seven years ago, Heslin told members of a Senate panel how his son Jesse had shouted for other students to run after shooter Adam Lanza entered his schoolroom. The boy was shot in the forehead.

“Sandy Hook will never, ever be the same.”

“Do something,” Heslin pleaded with the senators.

But, Murphy said, “seven years later we have not done anything.”

Murphy is hoping the bill the Senate rejected soon after Heslin gave his testimony will finally pass.

That legislation would not result in universal gun background checks, but would expand them to all commercial sales — a compromise that Schumer and Pelosi have rejected.

But even after a spate of recent mass shootings, in El Paso and Odessa, Texas and in Dayton, Ohio, the GOP-controlled Senate has failed to act on a comprehensive, House-approved bill that would expand FBI background checks of prospective gun buyers – or any other legislation, for that matter.

Murphy has spoken to Trump twice on the phone recently, urging him to back the compromise background check legislation, known as the Manchin-Toomey bill. But there is no indication the president will do that.

Meanwhile, Sen. Richard Blumenthal is working with Sen. Lindsey Graham, R-S.C., on a  bill that would encourage states to adopt red flag laws that would win the president’s endorsement.

In his floor speech Wednesday, Blumenthal said he had just met with Fred Guttenberg, who lost his daughter Jaime in the shooting at Marjory Stoneman Douglas High School, in Parkland, Fla., last year.

Blumenthal said Guttenberg spoke to him about the extreme risk protection order, or red flag, law approved in Florida after the Parkland mass shooting and how barely a year after implementation it has been used 2000 times.

“There will still be gun deaths in this country, but these laws work to save lives, and as Fred and I said to each other, ‘if one life has been saved in the state of Florida by its emergency risk protection order statute, it was worth doing,” Blumenthal said.

“My constituents say we don’t need permission slips from the president before we act.”

Trump met again with aides on Monday to discuss proposals to address gun violence. The White House may release a package of proposals this week, possibly Thursday.

“My constituents say we don’t need permission slips from the president before we act,” Murphy said.

Sen. Brian Schatz, D-Hawaii, said “We are not supposed to play mother may I with the president of the United States.”

Some blamed the National Rifle Association’s “stranglehold” on GOP senators for the inaction.

“This is a sordid crawl through the sewers of modern politics inhabited by the NRA,” said Sen. Sheldon Whitehouse, D-R.I.

While the NRA has pressed Trump to reject any plan that would expand background checks to sales at gun shows and between individuals, the White House has floated some ideas.