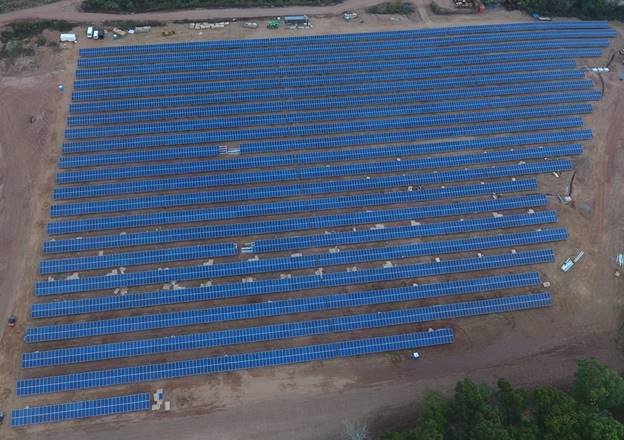 This solar project called NorCap South in East Windsor, supplies South Windsor with 28 percent of its municipal power through the concept of virtual net metering.

Editor’s Note: This is the fourth of six stories exploring how Connecticut is grappling with the effects of climate change, one small solution at a time.

South Windsor has a new energy plan. It has a lot of numbers, a lot of charts, a lot of arcane terminology and a lot of ten-dollar words. Oh, and one photo.

The proposal is for a solar installation in neighboring East Windsor. It looks like – well – a solar installation. But the plan represents a major component of how South Windsor expects to get more than 80% of its municipal electricity – that’s for about 40 buildings — from renewable sources in the next few years.

You heard that right. Eighty percent.

It goes without saying the town expects to save money.

While the 10-acre array of solar panels is standard, how they’re being used is not. They are being used under a concept called virtual net metering. Instead of putting solar directly into a building – say if you had solar panels on your roof – the solar power goes into the electric grid. And the power they generate is credited to users in another location.

In this case, the users aren’t even in the same town. One hundred percent of the power from the installation – known as NorCap South, built by Lodestar Energy – is being credited to 10 municipal accounts in the town of South Windsor. South Windsor pays the local utility – Eversource – to use that power.

“It’s 28 percent of our electric use,” said Stephen Wagner, chairman of South Windsor’s energy committee since it was formed in 2014 and keeper of all those numbers.

“Everything we’re doing – basically if we can prove it’s financially acceptable – we do it,” he said. “We have to prove that we’re saving money, not just being good green citizens.”

But there’s a strong good green citizen aspect to it anyway. A second virtual net metering project in a different nearby town – just about as big as the first – is waiting in the wings for state approval. 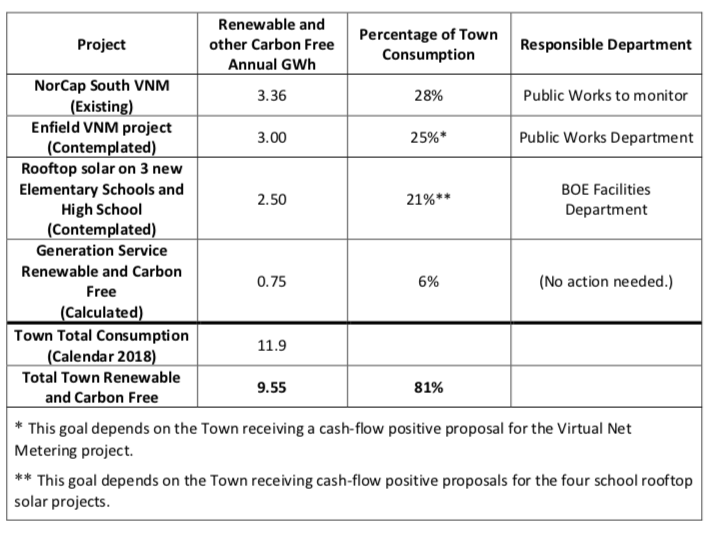 South Windsor’s new energy plan projects that in five years, more than 80 percent of the town’s power will be renewable or carbon-free.

Virtual net metering has had something of a fraught history in Connecticut.

A program with a $10 million cap, mainly for municipalities, was approved several years ago and filled up almost instantly. A second round of the same program is now waiting for activation with a long list of cities and towns hoping to participate.

South Windsor is also planning to install rooftop solar on all its schools. The four elementary schools are being rebuilt with solar-ready roofs and the middle and high schools are having their roofs replaced. Wagner said the elementary schools’ solar alone will provide another 21% of the load.

“We have to prove that we’re saving money, not just being good green citizens.”

And he said another 6% is coming from carbon-free electricity – which includes nuclear energy – purchased through Eversource.

Primarily, though, the project signifies a massive push by South Windsor for energy efficiency. The town’s energy consumption is already down by 17% from a 2010 baseline – and that’s despite an increase in demand due to new building space and equipment. Lighting upgrades have been made in buildings and streetlights.

School construction will include high efficiency insulation, windows that can keep heat in or out depending on the season, systems that regulate lighting based on sunlight, and all manner of programmable controls.

Much of these are already in place or planned for the 17 non-education buildings overseen by the town facilities manager, Clayton Major.

“I can control all buildings remotely from my cellphone,” Major said. “I’ll know something isn’t working right before someone even tells me and I’ll probably have it fixed before they even know it.”

Equipment has been upgraded wherever it can be to new, more efficient models, including pumps, boilers, heating, ventilation and air conditioning systems. Most critical for that kind of retro-fit is the pollution control authority – the biggest energy user in town. The 11 pump stations are getting new controls and equipment, as is the treatment plant itself.

But what about the cost of all these upgrades? Wagner said any number of incentive and financing programs have helped keep outlay costs low.

“Everything, we can say, has saved us money,” Wagner said. “We haven’t had to go to the town council and say, ‘Here’s what we have to spend more money on.’”

The projected savings: For solar in five schools, the town expects to save more than $100,000 per year. And the first virtual net metering solar field is expected to save about $74,000 per year, or $1.4 million over 20 years.

But Wagner and his committee aren’t done. They’re thinking about geothermal. For the uninitiated, that’s thermal energy generated by the earth’s heat.

“That’s the next place to start saving energy,” he said.