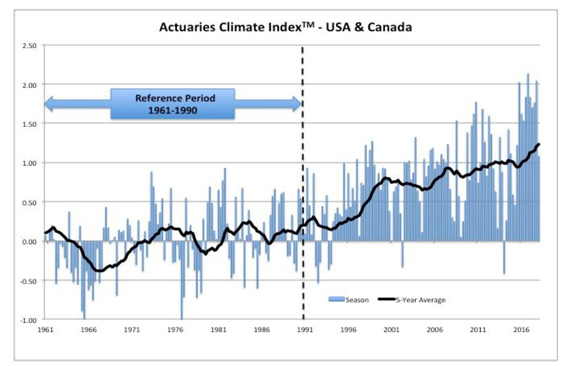 Editor’s Note: This opinion piece is the part of a larger series exploring how Connecticut and the nation are grappling with the effects of climate change.

This old cliché rings true, for climate is the distribution of weather. Weather’s distribution depends on season, location, internal variability, and external influences, both natural and human. As it is weather, not climate, that is observable and measurable, any study of climate is inherently statistical in nature.

Climate change is one of the most important social issues of our time. The climate science community faces the immediate, important task of informing difficult decisions that must be made regarding our economic, environmental, and public health systems. Confidence in the effectiveness of these decisions derives from confidence in the underlying climate science. Appropriate statistical analyses can increase such confidence.

Hence, for climate science research to be most successful, statisticians and climate scientists must better integrate their research teams. Indeed, we believe that climate research requires multidisciplinary teams that include what we call climostatisticians. Such integration of these two scientific communities would likely require collaboration between divisions of research funding agencies, and might require reshaping of current reward systems in academic departments and government labs.

Taking a cue from the life sciences

Depending on the climate science question, statisticians may take on the role of consultants or, alternatively, may need to do research themselves to develop novel statistical methods. Some climate questions, such as how to describe large-scale global aspects of the climate system, require existing, well-developed statistical approaches, and the statistician’s role is then to help choose and implement the appropriate methodology. It is important to have such consultants involved from the beginning of the research process so that research questions are properly paired with appropriate statistical approaches and so that appropriate data or model output are gathered. Statisticians take on a methodological research role—developing novel techniques—when they tackle more advanced questions, for example, quantifying the uncertainty of future climate projections.

The field of human biosciences can serve as a model for integrated research between domain-area scientists and statisticians. Biostatisticians are such a fundamental part of medical and public health research today that it is hard to imagine this research being done in their absence. Indeed, biostatisticians’ work has contributed to the high level of public trust in modern medicine.

Biostatisticians work in both consulting and research roles. A biostatistician doing clinical trial work is likely to be involved in designing an experiment and subsequently analyzing the experiment’s data using techniques agreed upon by the community or required by regulatory agencies. Other projects, meanwhile, demand original statistical research. For example, a biostatistician doing public health work may need to develop a novel model to link contributing factors (e.g., air pollution data recorded at multiple locations) to medical outcome data (e.g., hospitalizations with anonymous patient information).

Integration of statisticians into climate science does not have the long history that biostatistics has. However, there are many important and successful examples of joint work between statisticians and climate scientists, and some of this work has influenced policy at the federal government level. In one such example, statisticians played a role in producing and reviewing the 2006 National Research Council report on paleoclimate reconstructions [North et al., 2006], which aimed to reconcile the “hockey stick” controversy arising from the congressional inquiry into the work of Mann et al. [1998].

Another example of collaboration between climate scientists and statisticians that should influence climate science practice is that of Paciorek et al. [2018]. This research shows that in the context of event attribution—that is, attributing the occurrence or severity of specific weather events to climate change —naïvely implemented (but commonly used) statistical bootstrap techniques quantify uncertainty poorly, particularly when estimating the small probabilities associated with attributing causes to individual events.

Over the past couple of decades, statisticians dedicated to advancing climate science have emerged. These statisticians have developed advanced statistical techniques and demonstrated their use for understanding the nuances of past and future climates.

Many of the researchers in this fledgling field of statistical climatology received their graduate or postdoctoral training from a group at the National Center for Atmospheric Research (NCAR) that began in 1994 as the Geophysical Statistics Project (GSP) before evolving into the Statistics and Data Science (SDS) group.

GSP and its successor SDS developed statistical methods or models for spatial inference in the massive data sets now common to climate science, for numerical output produced by climate and other geosystem models, for studying paleoclimate, and for characterizing extreme events, among other applications. The group also hosted valuable workshops that brought together statisticians and climate scientists, and its visiting researcher program built even deeper collaborations between the two communities.

By many measures, the story of statistical climatology over the past two decades is one of success. In large part because of GSP and SDS, numerous researchers have been trained and are now leaders in statistics or climate disciplines, and statistical research has developed innovative methods useful for answering detailed climate science questions. However, implementation of these new methods has not been as widespread, and the impact on contemporary climate science has not yet been as pervasive, as it should be.

Part of the reason for statistics’ limited impact is money. The resources put into statistical climatology pale in comparison with funding for other areas, such as biostatistics. Another part of the reason has to do with the culture within both the statistics and climate science communities. Most statistical climatologists have academic homes in university statistics departments that tend to reward development of statistical methods over their application. And climate scientists have not adopted the practice, standard in biomedical research, of including statisticians when forming their teams or applying for grants. Thus, unlike for biostatistics, there is not a legion of consulting statisticians who are well trained in the techniques common to climate science.

The study of climate is every bit as important, interesting, and challenging as the study of medicine is. Although we are not calling for equivalent resources, we are calling for fundamental changes in statistical climatology so that it more closely resembles the field of biostatistics. Like biostatistics, climate studies require major research investments to develop appropriate methods for new, large, and unfamiliar data sources. Not only that, climate studies also require multidisciplinary teams, including climostatisticians, to integrate advanced statistical methods into climate science. Developing this capability will require significant resource investments from the major U.S. funding agencies as well as fundamental changes in practice from statisticians and climate scientists.