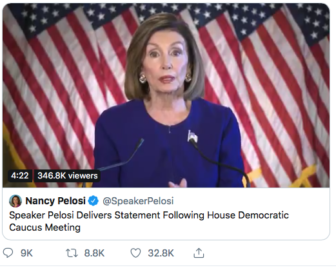 Speaker of the House Nancy Pelosi announcing her decision to pursue impeachment inquiry against President Trump. Pelosi posted her speech to her Twitter feed.

Washington — As Speaker of the House Nancy Pelosi announced Tuesday she would launch a formal impeachment inquiry of President Donald Trump, members of the Connecticut delegation, who had opposed that action, said they believe the president has left them with no alternative.

And, earlier in the day, both Connecticut senators, Richard Blumenthal and Chris Murphy, also said they would urge the House to begin impeachment proceedings.

The political game changer, according to Connecticut lawmakers and Democratic colleagues who on Tuesday also dropped their opposition to impeachment, began with allegations by an intelligence agency whistleblower that surfaced last week.

In a complaint to an inspector general, the whistleblower accused Trump of pressuring Ukrainian President Volodymyr Zelensky in a July 25 phone call to begin a corruption investigation into former Vice President Joseph Biden, a leading contender for the Democratic presidential nomination, and the candidate’s son, Hunter Biden.

“The president must be held accountable. No one is above the law.”

Speaker of the House Nancy Pelosi

The phone call was made the day after former special counsel Robert Mueller testified before Congress about his investigation into Russian meddling in the 2016 elections.

The Trump administration has declined to release the whistleblower’s complaint, angering many Democrats.

The House plans to vote Wednesday on a resolution condemning the Trump administration’s efforts to block the release of the complaint and the need to protect the whistleblower.

In announcing the impeachment inquiry, Pelosi said Trump has violated his oath of office and obligations under the Constitution.

“The president must be held accountable. No one is above the law,” Pelosi said after a closed-door meeting with members of her party.

She said that six separate committees will be reporting to her on their findings related to Trump’s actions while in office under the umbrella of a formal inquiry. 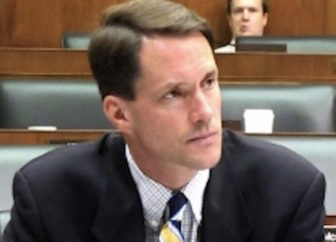 Himes, who is a member of the House Intelligence Committee that is among the panels tasked with the impeachment inquiry, said House Democrats are “unified” behind the plan.

“This is a serious enough step,” he said. “We are beginning to meet the president’s behavior with a calibrated response.”

Democratic lawmakers will demand that Joseph Maguire, the Director of National Intelligence, release the whistleblower’s complaint when he appears before a House Intelligence Committee on Thursday.

“At that time, he must turn over the whistleblower’s full complaint to the committee,” Pelosi said. “He will have to choose whether to break the law or honor his responsibility to the Constitution.”

Larson said he would press for impeachment at Tuesday afternoon’s caucus meeting because “the Trump administration has continued to obstruct and break the law.”

“I have spoken with Rep. Jim Himes, a senior member of the Intelligence Committee, at length who has underscored the gravity of this situation, which is why at today’s caucus I will be advocating for impeachment proceedings to begin,” Larson said.

“This is a serious enough step. We are beginning to meet the president’s behavior with a calibrated response.”

Although Trump vowed Tuesday to release a transcript of his phone conversation with Zelensky, Larson said this isn’t sufficient.

In statements released Tuesday afternoon,  Hayes and Courtney said they resisted calls for impeachment — until now.

Hayes said the Trump administration has made “repeated attempts to impede any investigation by blocking the collection of facts.” 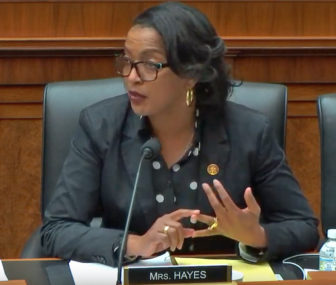 “The thwarting of congressional authority at every turn is unconscionable and is in clear violation of the Constitution,” Hayes said.

Courtney, a member of the House Armed Services Committee, also said he is dismayed that the administration has refused to release the whistleblower complaint to Congress.

“I am deeply troubled by the grave national security implications of allowing a president to abuse our system of checks and balances, and to willfully ignore Congress’s role in providing critical security aid to our partners abroad,” Courtney said.

After the Democratic caucus meeting, Rep. Rosa DeLauro, D-3rd District, referred reporters to a statement she issued on Monday about the Ukrainian affair.

“An impeachment inquiry may be the only recourse Congress has if the President is enlisting foreign assistance in the 2020 election,” DeLauro said in her statement. “Congress must meet this pivotal moment in our nation’s history with decisive action.”

Biden on Tuesday also called for Congress to begin impeachment of Trump if the White House continues to stonewall congressional investigations. 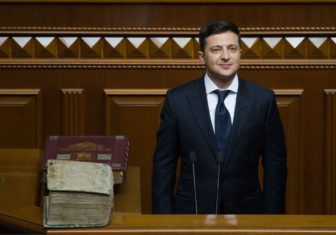 Trump has denied any wrongdoing, although he’s admitted to mentioning “corruption” by the Bidens in his phone call with Zelensky and asking his administration to withhold U.S. military aid to Ukraine.

In reaction to a growing scandal, Trump will release an unredacted transcript of his controversial call with  Zelensky on Wednesday, seeking to combat allegations he improperly pressured Ukraine to open an investigation into the Bidens.

Trump also plans to meet with Zelensky in person in New York during a meeting of the United Nations before hosting a freewheeling late-afternoon press conference.

The president reacted to the plans for a formal impeachment inquiry in a tweet.

“Such an important day at the United Nations, so much work and so much success, and the Democrats purposely had to ruin and demean it with more breaking news Witch Hunt garbage. So bad for our Country!” he wrote.

Senate Majority Leader Mitch McConnell, R-Ky., said the House Democrats’ action was a “rush to judgment” that came ” just a few hours after President Trump offered to release the details of his phone conversation with President Zelensky.”

“Speaker Pelosi’s much-publicized efforts to restrain her far-left conference have finally crumbled,” McConnell said. “House Democrats cannot help themselves. Instead of working together across party lines on legislation to help American families and strengthen our nation, they will descend even deeper into their obsession with relitigating 2016.”

While Pelosi was able to keep House Democrats unified behind her plan on Tuesday, some of the more progressive members of her party are eager for an impeachment vote on the president.

“It has to happen,” said Rep. Al Green, D-Texas. “This is being driven by history now.”