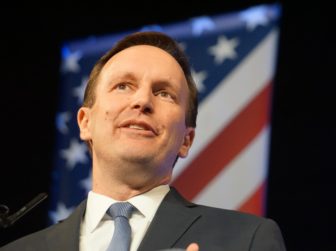 Washington – Sens. Chris Murphy and Richard Blumenthal on Tuesday said the U.S. House must begin an impeachment inquiry into President Donald Trump based on allegations of a whistleblower who said the president had pressured the Ukrainian president to investigate former Vice President Joseph Biden and his son.

Democrats have accused the president of pressuring Ukrainian President Volodymyr Zelensky’s government to begin an investigation of Hunter Biden’s links to an Ukrainian gas company. They also say  Trump withheld $250 million in U.S. military aid to increase that pressure.

“If, as it appears Mr. Trump has already acknowledged, the president violated his oath of office by using the constitutional powers entrusted to him to try to destroy a political rival, then the president must be impeached,” Murphy said.

Blumenthal said, “I am calling today for a House Select Committee to investigate and move forward with impeachment proceedings against the president.” 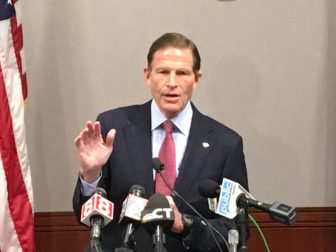 “I reached this decision with sadness, but also anger, after the president has repeatedly broken laws and betrayed his oath of office,” Blumenthal said. “His seeking corrupt assistance from a foreign leader for personal political gain crosses the line.”

Democrats are angered by the Trump administration’s refusal to provide Congress with the complaint by the unknown whistleblower, suspected to be a member of the intelligence community.

Blumenthal said “this illegal misuse of the presidency for private benefit is an impeachable act.”

Trump has denied any wrongdoing. He said his call to Zelensky was a “perfect phone call” and has hinted he would release a transcript.

But The Washington Post late Monday reported that Trump asked his administration to withhold almost $400 million in military aid for Ukraine at least a week before a phone call in which Trump is said to have pressured the Ukrainian president to investigate Hunter Biden.

Murphy held a press conference in Hartford on Monday morning to say he was rethinking his opposition to impeachment, but said he did not have a timeline for a final decision. The senator said one reason he had opposed impeachment is that he felt uncomfortable issuing orders to his colleagues in the U.S. House.

But Murphy has for months been concerned about the Trump administration’s relationship with Ukraine.

In May, when reports broke of Trump attorney Rudy Giuliani’s plan to travel to Ukraine to ask the government to officially investigate Hunter Biden, Murphy — a member of the Senate Foreign Relations Committee — asked the panel to investigate the matter.

Murphy has also made several trips to Ukraine, the latest at the beginning of September, in which he met with Zelensky over the stalled U.S. military aid.

But Murphy said he was unaware at that time of the whisleblower’s complaint and that Trump had spoken directly with Zelensky about the Bidens.

House Speaker Nancy Pelosi, who has resisted increasing calls for impeachment from party members, has called a meeting with House Democrats Tuesday afternoon to discuss the issue.