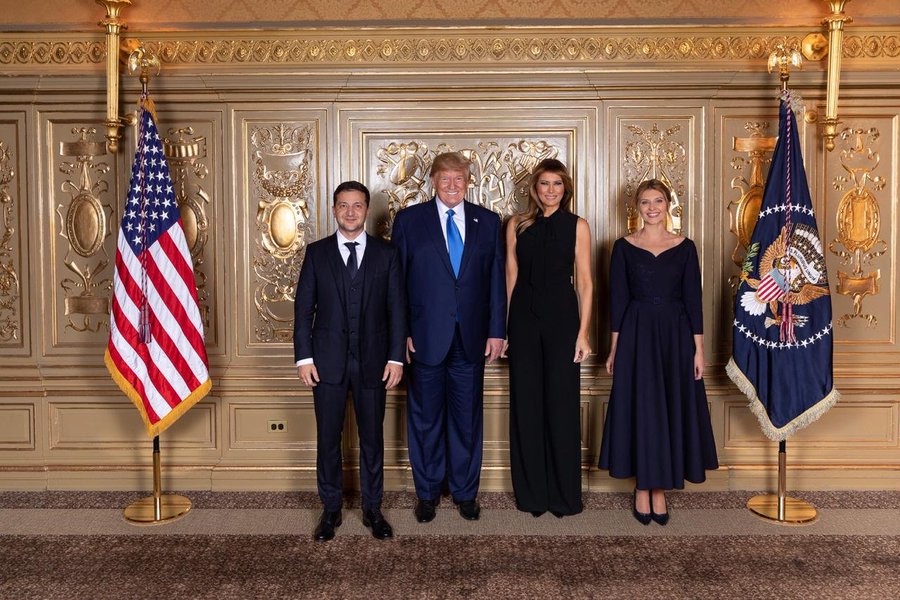 Ukraine President Volodymyr Zelensky tweeted this photo Tuesday night of himself and President Trump, with their wives Olena and First Lady Melania Trump, during a reception at the United Nations in New York City.

Washington – The release Wednesday of a partial transcript of President Donald Trump’s phone call to Ukrainian President Volodymyr Zelensky provoked Connecticut lawmakers to double down on their support for an impeachment inquiry and caused discomfort among some GOP lawmakers.

“President Donald Trump’s call with Ukrainian President Volodymyr Zelensky should alarm every American—especially those in Congress who have taken an oath to support and defend the Constitution,” said Rep. Rosa DeLauro, D-3rd District.

In a statement, DeLauro said she was “reiterating” her support for an impeachment inquiry, “which is the only recourse Congress has to respond to President Trump’s egregious actions.”

DeLauro was less forceful Tuesday, saying “an impeachment inquiry may be the only recourse Congress has if the President is enlisting foreign assistance in the 2020 election.”

In a partial transcript of the July 25 call released by the White House Wednesday morning, Trump repeatedly says Zelensky should work with Attorney General William P. Barr or his personal lawyer, Rudolph W. Giuliani. Giuliani had been pressing Ukrainian officials to investigate the role Vice President Joe Biden’s son had in an Ukrainian gas company.

“I would like to have the Attorney General call you or your people and I would like you to get to the bottom of it,” Trump said in the White House memo, which is a not a verbatim account of the conversation.

Zelensky replied that “my candidate” for the prosecutor job “will look into the situation, specifically to the company that you mentioned in this issue.”

Trump asked for the investigation after Zelensky mentioned the need for more U.S. military aid.

Sen. Richard Blumenthal said the president’s remarks during the call are alarming for multiple reasons.

“William Barr may now be in legal jeopardy because he testified before the Senate Judiciary Committee that the president never asked him to investigate anyone.”

“William Barr may now be in legal jeopardy,” Blumenthal said, “because he testified before the Senate Judiciary Committee that the president never asked him to investigate anyone.”

“He should be brought back before the Senate Judiciary Committee to explain his previous testimony,” said Blumenthal, a member of the panel. “Moreover, Attorney General Barr must recuse himself from any DOJ involvement in this matter immediately.”

Justice Department spokesperson Kerri Kupec said “the president has not spoken with the Attorney General about having Ukraine investigate anything relating to former Vice President Biden or his son.”

Trump also asked Zelensky for help in finding the Democratic National Committee server that U.S. officials say was hacked by Russian intelligence months before the 2016 election.

“The server, they say Ukraine has it,” Trump says according to the memo. “I would like to have the Attorney General call you or your people and I would like you to get to the bottom of it.”

Kupec said Connecticut U.S. Attorney John Durham is leading a team exploring the extent to which a number of countries, including Ukraine, played a role in the counterintelligence investigation directed at the Trump campaign during the 2016 election.

“While the Attorney General has yet to contact Ukraine in connection with this investigation, certain Ukrainians who are not members of the government have volunteered information to Mr. Durham, which he is evaluating,” Kupec said.

Durham was chosen by Barr to lead an investigation, dubbed “Crossfire Hurricane,” into former special counsel Robert Mueller’s investigation of Russian meddling in the 2016 election. Durham has been virtually silent since he was appointed to the job in May.

Asked to comment by a reporter after a photo-op with Trump at the United Nations Wednesday, Zelensky said “I’m sorry but I don’t want to be involved to democratic … open …. elections, elections of U.S.A.”

“No, you heard that we had, I think, good phone call,” Zelensky said. “It was normal, we spoke about many things, and I, so I think and you read it that nobody pushed it, nobody pushed me.”

Yet Blumenthal  said the president’s response to Zelenesky’s request for aid with a request for favors “reads like a classic gangster shakedown – and I prosecuted mob bosses, I would know.”

Sen. Chris Murphy, a member of the Senate Foreign Relations Committee, said “the transcript is devastating.”

“Within moments of President Zelensky discussing the need for U.S. security aid, Trump asks him to investigate his political opponents,” Murphy said.

Murphy, who had resisted calls for impeachment until Tuesday, said “ultimately this is a decision for the House to make.”

“The question is how large is the scope of the (House) investigation and how fast it goes,” Murphy said.

House Speaker Nancy Pelosi, D-Calif., on Tuesday announced the start of an impeachment inquiry, to be carried out by six House committees that have been investigating the conduct of the president, his administration and his campaign since Democrats seized control of that chamber in February.

Trump has characterized his phone call to Zelensky as “congratulatory” and “perfect.”

He told supporters in a new fundraising email: “I’VE DONE NOTHING WRONG. TRUST ME, YOU SAW THE TRANSCRIPT.”

Of Republicans who defended the president’s conduct, Murphy said “the bar is so low now, I worry we can’t raise it back up.”

But not all Senate Republicans defended the president on Wednesday..

The phone call between Trump and Zelensky was so concerning that the intelligence community inspector general – who had received a whistleblower’s complaint about the conversation — thought it a possible violation of campaign finance law.

In late August, intelligence officials referred the matter to the Justice Department as a possible crime, but prosecutors concluded last week that the conduct was not criminal.

As a member of the House Intelligence Committee, one of the panels tasked with carrying out the impeachment inquiry, Rep. Jim Himes, D-4th District, will be questioning acting Director of National Intelligence Joseph Maguire Thursday about why Congress has been denied access to the whistleblower’s complaint and other issues related to the president’s call.

Himes called the phone call between Trump and Zelensky “a shocking glimpse into the mind of a president who is either unwilling or unable to distinguish between presidential action and political attack.”

“As we suspected, President Trump did, in fact, request that a foreign government investigate his political opponent,” Himes said “This goes beyond poor judgment or an ethical lapse on the President’s part. This is premeditated, criminal behavior.”