Blumenthal optimistic about GOP support in Senate for impeachment

Privately, Republican senators are 'deeply troubled' by events, he says 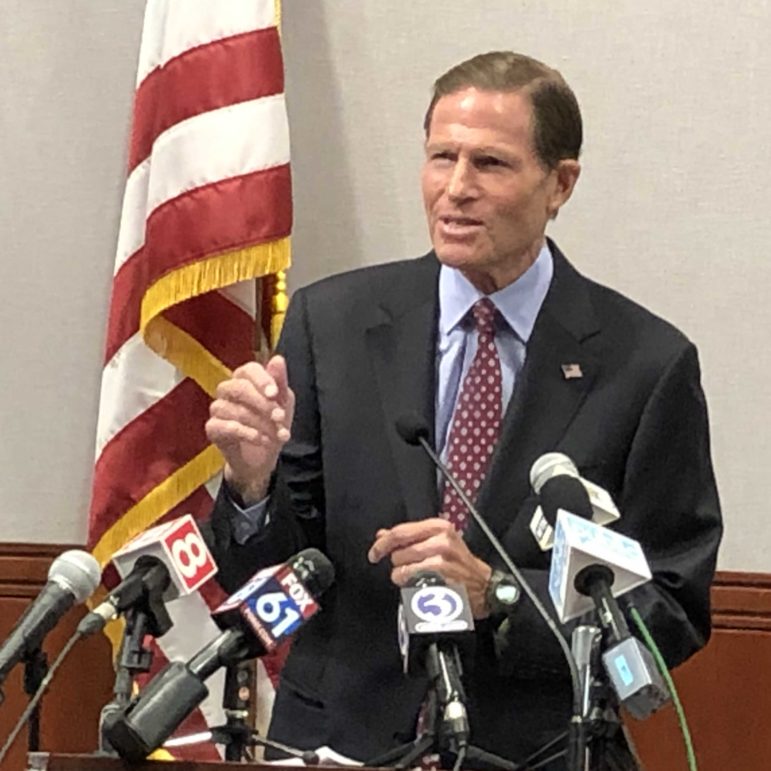 Washington – Sen. Richard Blumenthal is optimistic Republican senators, who this week have either supported President Donald Trump or dodged reporter’s questions about a newly launched House impeachment inquiry, will eventually see the need to impeach the president.

“The votes [for impeachment] in the Senate are unknown at this point,” Blumenthal said at a Friday press conference in Hartford.  “Yes, the Republicans have a majority…but as the truth comes to the American people, I think my colleagues in the Republican Senate are going to respond in the same way as Republicans did during Watergate.”

Former President Richard Nixon resigned before the U.S. House took up impeachment after Republican Senate leaders told him he did not have support in the Senate, which was controlled by Democrats.

But Senate Republicans, who would have to consider articles of impeachment if they are approved by the House, this week showed support for Trump, or dodged reporter’s questions about their position on the Ukraine controversy. That scandal was  touched off by a CIA whistleblower’s complaint that Trump inappropriately asked Ukrainian President Volodymyr Zelensky to investigate former Vice President Joe Biden and his son, Hunter Biden.

At least 15 Republican senators would have to join all Senate Democrats in voting Trump out of office, which right now looks to be an upward climb for those who want to impeach the president — especially since Senate Majority Leader Mitch McConnell has firmly opposed considering charges against Trump.

Still polls are showing a shift in public sentiment since House Speaker Nancy Pelosi announced the initiation of an impeachment inquiry on Tuesday.

A Marist/NPR/PBS NewsHour survey,  taken on Wednesday, found that nearly half of Americans support an impeachment inquiry and other recent polls also show a trend, especially among independent voters, in favor of impeachment.

But Sens. Mitt Romney, R-Utah, and Ben Sasse, R-Neb., are the only GOP senators who have publicly criticized the president’s actions.

Former Arizona Republican Sen. Jeff Flake,  however, a frequent Trump critic, has said “at least 35” GOP senators would vote to remove Trump from office if the vote were held privately. But it would not be.

“We’re seeing some cracks, privately more than publicly at this point,” Blumenthal said. “Privately, my Republican colleagues are deeply troubled.”

Blumenthal said that “eventually” his Republican colleagues “will need to act out of conscience and not just politics.”

“The two may in fact coincide,” Blumenthal said. “Because they will sense that they will not only be judged harshly by history but by voters in at the ballot box if they are complicit in the president’s lawbreaking.”

Correction: Oct. 1, 2019
An earlier version of this story misstated which political party controlled the U.S. Senate when President Richard Nixon faced impeachment proceedings in 1974. The Democratic Party controlled the senate at that time, not the Republican Party.