These kids demand more than ‘Tobacco 21’ to curb vaping 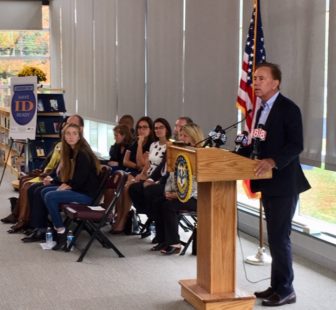 Meriden — It was a public-service announcement with a touch of self-congratulation: Gov. Ned Lamont, legislators and public-health officials went to Orville H. Platt High School on Tuesday to celebrate and publicize the new law raising the age for tobacco and vaping purchases to 21.

Aware that their elders have used about $2 billion of tobacco settlement money on just about everything but smoking cessation, student activists pressed them to do more to halt the rapid increase in the use of e-cigarettes by secondary-school students.

“Big tobacco spends billions trying to make tobacco products to look safe and fun for our state, and our state spends zero to stop them,” said Evelyn Levesque of Newington, a senior at the Greater Hartford Academy for the Performing Arts. “That is the next fight. That is what we will change next.”

The governor and lawmakers were hardly offended. They told them to keep pushing at the State Capitol, as some of the students in the audience did to support the overwhelming passage this year of Tobacco 21, the law that took effect Tuesday.

“Keep speaking out. I mean, stay up there,” Lamont said. “Come up to the legislature and let us know when we’ve gone too far, or we should go further.”

FIVE THINGS to know about Tobacco 21

Lamont was speaking just two weeks after Greta Thunberg, a Swedish teen, blistered adults for their inaction on climate change in a speech to the U.N. He told his school audience they were credible on a range of issues, including gun control, tobacco use and the environment.

“Your point of view is really credible, because you go in there with no political agenda, just a point of view that you think ought to be heard,” Lamont said.

New data emerges regularly on the growing use of e-cigarettes among young people, but the statistics cited most frequently by backers of the new law is this: 95 percent of adults addicted to nicotine began smoking or vaping as a teen.

“That’s why this law is so important,” said Sen. Mae Flexer, D-Windham, a sponsor of the bill. 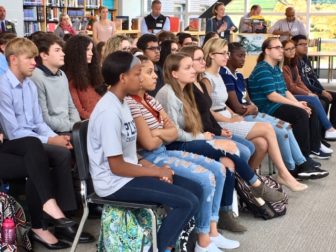 The audience at Orville H. Platt High School, named in memory of a U.S. senator and speaker of the Connecticut House.

The new law takes effect as public-health officials are struggling to find the precise cause of serious and occasional fatal lung ailments of vaping users.

Rep. Cristin McCarthy Vahey, D-Fairfield, told the audience that a moratorium on vaping products might be worth considering until more is known.

Sen. Saud Anwar, D-South Windsor, who is a physician specializing in respiratory illnesses, wrote him hours later, asking him to impose a four-month moratorium on vaping sales.

“There are lives on the line. I implore Governor Lamont to consider the prospect of taking action to request a moratorium on vaping sales until we can determine what is causing the illnesses and deaths occurring around the country,” Anwar said.

Lamont previously has said he does not have the authority to curtail the sale of vaping products without legislative authorization.

The governor had no firm answer for what his administration would do regarding the greater use of some of the tobacco settlement money for tobacco education and cessation. His commissioner of public health, Renée Coleman-Mitchell, said her department would be making recommendations.

Lamont, 65, who was briefly a smoker when he was young, said he knows how admonitions about smoking and vaping might play among teens, who are still expected to have black-market access to cigarettes and vaping products.

“We’re here because we love you,” Lamont said.

Bryte Johnson, the director of government relations for the American Cancer Society Cancer Action Network, said meaningful education and outreach to teens will require money as well as the Tobacco 21 law.

“That’s how you educate,” Johnson said. “It costs money,”

A previous effort to ban smoking in schools was thwarted by the lack of funds to pay for signage, he said.