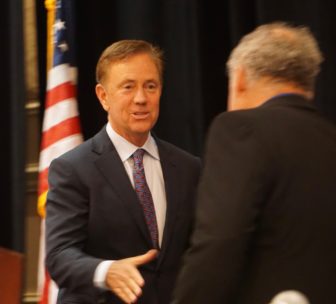 Mashantucket — Connecticut’s millionaire governor delivered a populist message Friday in his first appearance before the AFL-CIO since taking office, highlighting first-term victories on their behalf and asking them to pressure Democratic legislators to back a $20 billion transportation plan he intends to roll out this month.

Gov. Ned Lamont, a Greenwich cable entrepreneur who self-funded his campaign for governor, defended the 90-cent increase in the minimum wage that took effect Tuesday, ridiculing anyone who claims that going from an hourly minimum of $10.10 to $11 is the difference between profitability and failure.

“Can I just tell you something? I come out of the business world. You are one hell of a lousy businessman if the only way you can keep going is by shortchanging your people 90 cents,” Lamont said. “If you can’t compete, get off the playing field and stop blaming the people who do the work every day.”

Lamont looked back on his first session as a success, more or less. Transportation funding remains the task ahead, but he mentioned the $15 minimum wage and paid family and medical leave laws desired by labor, as well as getting a budget passed during the regular session as accomplishments.

The speeches to the biennial convention of the Connecticut AFL-CIO by Lamont and, later, Attorney General William Tong, both Democrats elected to open seats last year with the backing of labor, underscored the long and mutually beneficial relationship of Democrats and organized labor in Connecticut, often to the dismay of Republicans and the state’s business associations.

Tong entered the ballroom at Foxwoods Resort Casino as the labor federation played, “Taking Care of Business.” The governor and attorney general both denounced the U.S. Supreme Court’s 5-4 decision last year in Janus. v. AFSCME, Council 31, and vowed to fight its impact in Connecticut.

The ruling allows non-union government workers to stop paying agency fees, reversing a 41-year-old precedent set in another case, Abood v. Detroit Board of Education. Abood allowed government workers to opt out of the unions and decline to contribute to union political funds, but they still could be assessed for a share of the costs incurred during collective bargaining.

Unions collected $29.4 million in annual dues from 39,647 unionized state employees in Connecticut and another $3.4 million in agency fees from 5,490 state employees who are not union members but benefit from union-negotiated wages and benefits. Before the decision, 278,000 workers belonged to unions in Connecticut, or 16.9 % of the workforce. But about 20,000 more were represented by unions, according to the Bureau of Labor Statistics.

On Friday, Lamont bemoaned what he described as an anti-worker Trump administration that he says has exacerbated racial and wealth fault lines in the U.S.

“We have a president who is building walls, and I want to build bridges,” Lamont said.

“We love you, Ned,” yelled Janet Orr, a member of the International Association of Machinists.

He hopes that affection might translate into pressure on Democratic legislators to pass a transportation infrastructure plan. His new plan is expected to include tolls, though on a far smaller scale than he proposed in February.

Democrats control the General Assembly, and the governor said they need to back him. 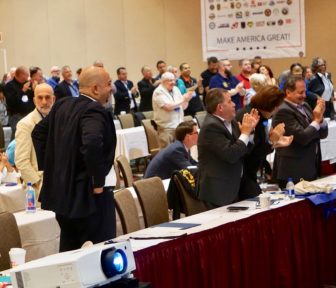 Lamont asked, “Are you ready to stand up?”

Tolls are a non-starter for Republicans, and it has proven problematic with some Democrats, especially in the Senate.

“I think some of the Republicans want a political issue and not a solution,” Lamont said outside the convention hall. “And I think some of the Democrats just wish the whole issue would go away: ‘As long as a bridge doesn’t fall on my watch, we can live to fight another day.’ ”

Not everyone stood and applauded the governor’s entrance and departure.

Some AFSCME workers are unhappy over an element of another labor victory: the passage of a paid family and medical leave law. At Lamont’s insistence, private insurers can compete to the administer the new benefit.

They were in the minority. Lamont was repeatedly interrupted by applause as he talked about winning passage of the paid leave and minimum wage laws. The latter will raise the minimum wage in annual increments to $15 in 2023.

Sen. Julie Kushner of Danbury and Rep. Robyn Porter of New Haven, the Democratic co-chairs of the Labor and Public Employees Committee, each were given Wonder Woman plaques for their roles in the passage of the $15 minimum wage and paid leave laws.

They promised another strong labor agenda next year.

Support for collective bargaining is a given for Democratic statewide officials, but the governor made a point of reiterating his support, noting that Republicans in other states have attacked it.

Lamont acknowledged outside the ballroom that he will be challenged, however, to keep relations cordial as his administration tries to reshape and shrink state government in advance of a wave of expected retirements in 2022.

‘We’re going to have potentially tens of thousands of people retiring in the next few years, and I’ve got to think what’s the most efficient way to deliver those services for the 21st century,” he said.

The power in the labor movement has shifted to government workers. Nationally, the 33.9 percent membership rate of public-sector workers is more than five times higher than the 6.4 percent rate of private-sector workers.

Lamont said change can be achieved without acrimony.

“We do it by working with people, first of all, and not vilifying people,” he said. “I think folks in that room know I want to do the best thing for the state and keep faith with those folks there who are working for the state.”