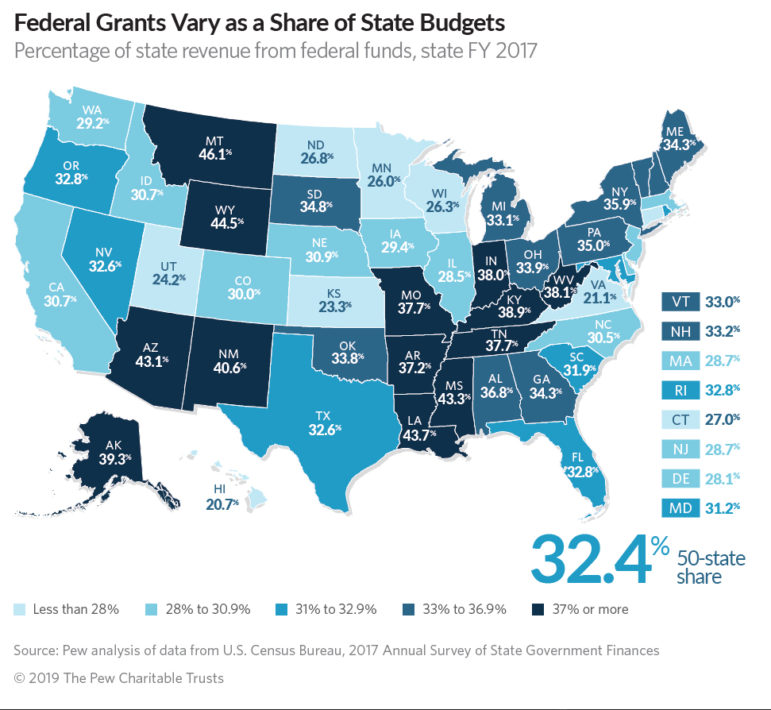 Washington – A Pew Charitable Trust report released Tuesday shows that federal dollars, as a percentage, account for less revenue in Connecticut than most other states.

The report said the U.S. government provided states an average of 32.4% of all the federal revenue collected in fiscal year 2017—down slightly from 32.6% a year earlier. In Connecticut, federal money accounted for about 27% of the state’s revenues in 2017, down from 27.9% the previous year. Only seven states got a lower percentage of federal funds than Connecticut.

Pew noted that fiscal 2017 marked the first time that the 31 states with expanded Medicaid coverage, including Connecticut, had to pick up 5% of the costs of insuring enrollees who became eligible under the Affordable Care Act.

“Still, federal funds were at their fourth-highest level in more than 50 years as a percentage of 50-state revenue, based on data going back to 1961, underscoring the significant role that federal dollars play in financing state government,” the report said.

Because it was allowed under the ACA, Connecticut and other states expanded Medicaid coverage to uninsured adults whose incomes are at or below 138% of the federal poverty level – creating a program known as HUSKY D.

As of July, 2017 Connecticut has added about 217,000 of these adults to HUSKY under the ACA expansion, according to the Connecticut Department of Social Services. 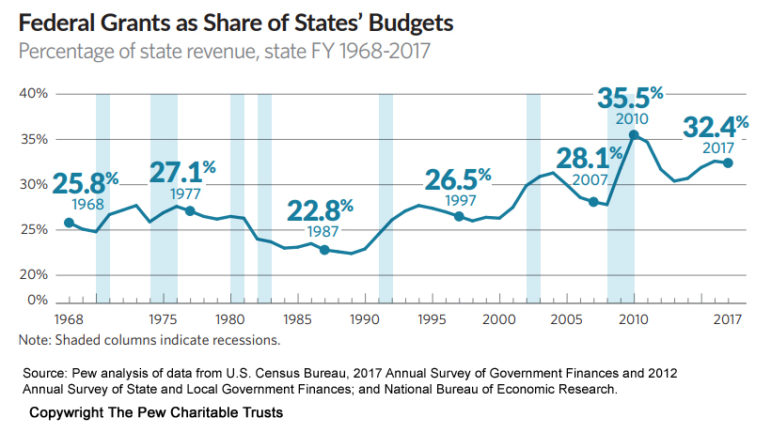 The states that expanded their Medicaid programs will receive even less federal health grant money next year, as they gradually become responsible for 10% of the cost of Medicaid coverage for single adults by Jan. 1, 2020.

According to the Pew report, there is a wide range in the amount of money states received from the federal government in 2017.

Montana received the highest percentage of state revenue from Washington D.C. — 46.1% — while Virginia (21.1%) and Kansas (23.3%) had the lowest percentage share of federal money.

The Pew study is an incomplete assessment of how much federal money comes to the state because it does not include federal contracts won by private companies in Connecticut, money to individuals in the form of  Social Security benefits, or Medicare payments to state doctors and hospitals.

For example, federal contracts with Connecticut-based companies have trended to be about $13 billion a year, though last year was only $12 billion, according to USAspending.gov data. Most of the money spent is on defense contracts.

Still, considering all federal payments to the state — including federal grants, federal contracts, Medicare and Social Security payments, and salaries of federal workers in Connecticut — the state pays more to Washington D.C. in taxes than it receives in funding and is considered a “donor” state.

According to the Rockefeller Institute of Government, Connecticut is the nation’s top donor state, with state residents receiving just 74 cents back for every $1 paid in federal taxes.

Massachusetts, New Jersey, New York, North Dakota, Illinois, New Hampshire, Washington state, Nebraska and Colorado round out the list of donor states. The residents of most of those states, like Connecticut, have higher-than-average incomes.

4 thoughts on “Connecticut lags in federal payments to state treasury”