Preliminary report on Bradley Airport crash released, cause yet to be determined 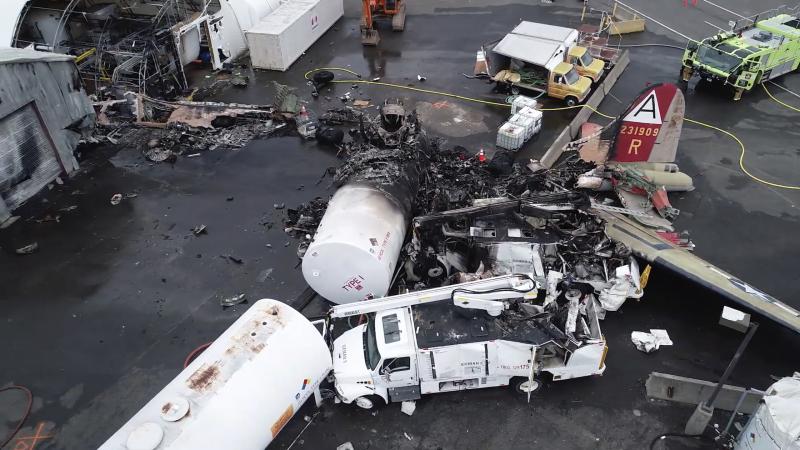 This image taken from video provided by the National Transportation Safety Board shows damage from a World War II-era B-17 bomber plane that crashed Oct. 2 at Bradley International Airport.

The National Transportation Safety Board has released a preliminary report regarding the vintage, World War II-era plane that crashed at Bradley International Airport in Windsor Locks on Oct. 2.

A spokesperson with the NTSB said that the cause of the crash will only be revealed upon the completion of the investigation. But, the report does detail facts uncovered thus far, including what the pilot reported about the plane as it was experiencing an issue shortly after takeoff.

According to the report, the pilot told Air Traffic Control that the fourth of four engines on the plane had a “rough mag” on it. The pilot asked if he could return to the airport just a few minutes after the B-17 took off at 9:50 a.m., when it was 500 feet above ground level near runway 6 at Bradley. ATC reportedly approved the pilot’s request.

“The tower controller asked about the airplane’s progress to the runway and the pilot replied that they were ‘getting there’ and on the right downwind leg,” read the report. “No further communications were received from the accident airplane.”

Seven people died and another eight were injured after the B-17 lost control and crashed during an emergency landing attempt. A total of 13 people were on the plane, including three crew members and 10 patrons who paid to take a tour. The two others injured were a first responder and a worker on the ground.

All four engines, including the fourth engine that the pilot reported the issue about, were recovered by federal investigators. The NTSB reported that No. 1 and 2 engines were found partially attached to the left wing of the aircraft, the No. 3 was found on top of a de-icing tank, and No. 4 was recovered inside the de-icing building with its three blades in the “feather position.”

Connecticut Sen. Richard Blumenthal was on the scene shortly after the crash and he immediately raised concerns about the old aircraft being in the sky.

“The tragedy that happened here may be a source of lessons for others who are still flying these B-17s,” Blumenthal said. “It’s a vintage airplane and it needs to be properly maintained.”

Blumenthal said that the B-17 was one of 18 in the country registered with the FAA to be flight-worthy, but he suggested it might be for the planes to be grounded in museums.

But, at the time, Jennifer Homendy, a member of the National Transportation Safety Board who’s leading a team of federal investigators into determining the cause of the crash, wouldn’t make an immediate judgment.

“What I will say is that, the NTSB – if they feel that there is a safety concern with the B17s or operations in general such as this — we will issue urgent safety recommendations to try to address that safety issue,” Homendy said.

In the report, the NTSB said that the wreckage has been retained for further examination.