‘The three amigos’ of New England go on a second date 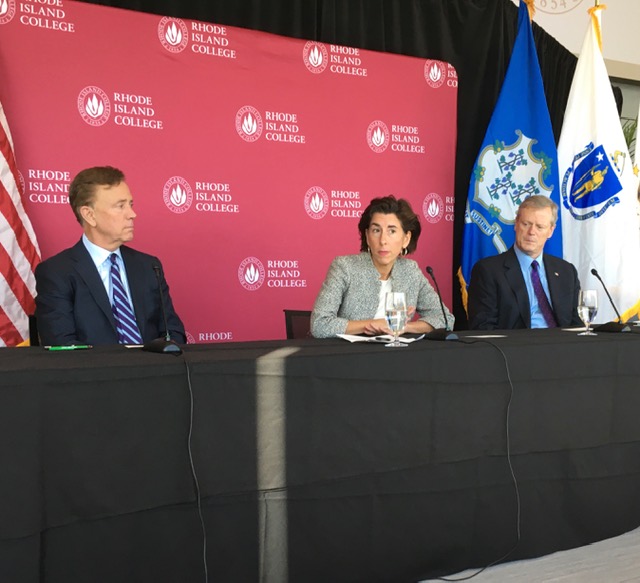 Providence —The governors of Connecticut, Massachusetts and Rhode Island lunched Thursday, another step in a relationship that has moved past optics, but falls short of a regional compact on climate change, transportation, health care or anything else of significance.

“The three amigos, it’s good to get back together again,” said Gov. Ned Lamont of Connecticut, who hosted the trio in July on the campus of Eastern Connecticut State University. “I think we’re going to do this on a regular basis.”

All three governors come from the world of business and are graduates of Harvard. Lamont and Gov. Charlie Baker of Massachusetts have MBAs, Lamont from Yale and Baker from Northwestern. Gov. Gina Raimondo of Rhode Island has a Yale law degree and is a former venture capitalist.

After a working lunch at Rhode Island College, none had a clear answer about their intentions for the relationship or their ambitions for what governors of states with shared borders and interconnected job markets should tackle on health care or climate change, issues at a stalemate in a deeply polarized Washington.

They talked about joint purchasing of software and data sharing — small things.

Joint purchasing might not be earth-shaking, but it’s a start and the dollars are not insignificant, said Baker, who once had direct oversight of the commonwealth’s budget under two predecessors, William Weld and Paul Cellucci.

“When you buy as much stuff as we buy, if you can save money, it usually has a lot of zeroes at the end of it, which is not a bad thing,” Baker said.

Lamont’s struggle in the polls is generally attributed to his push for a comprehensive system of highway tolls, despite a campaign promise he would seek only truck tolls. He is expected to make a new proposal this month with limited tolling.

“Look, it requires funds to rebuild infrastructure, and it takes sometimes a little political courage to do that,” Raimondo said.

Her state is in the early years of a 10-year transportation build, partially funded by tolls on commercial trucking. The truck-only tolls are being challenged in court.

One of Raimondo’s aides just smiled at the mention of Baker’s long run at the top of gubernatorial polls, his popularity untouched by a run of bad press over scandals involving overtime fraud by the State Police, unreliability in the MBTA transit system and a failure by the Registry of Motor Vehicles to take drunk drivers off the roads.

Peter Lucas, a journalist who has tracked Bay State politics for decades, delivered a scathing assessment Wednesday in the Boston Herald: “Gov. Charlie Baker has become an embedded deep state bureaucrat waiting for someone to tell him what to do.”

The Morning Consult found Lucas in the minority.

Under Raimondo, the state of Rhode Island is about to take over the troubled Providence school system, a politically risky move. Connecticut took the same step with Hartford’s schools in 1997, but that was long before Lamont’s involvement in state politics, and he did not talk about it.

Instead, Baker shared what Massachusetts learned in its takeover of the public schools in Lawrence eight years ago. 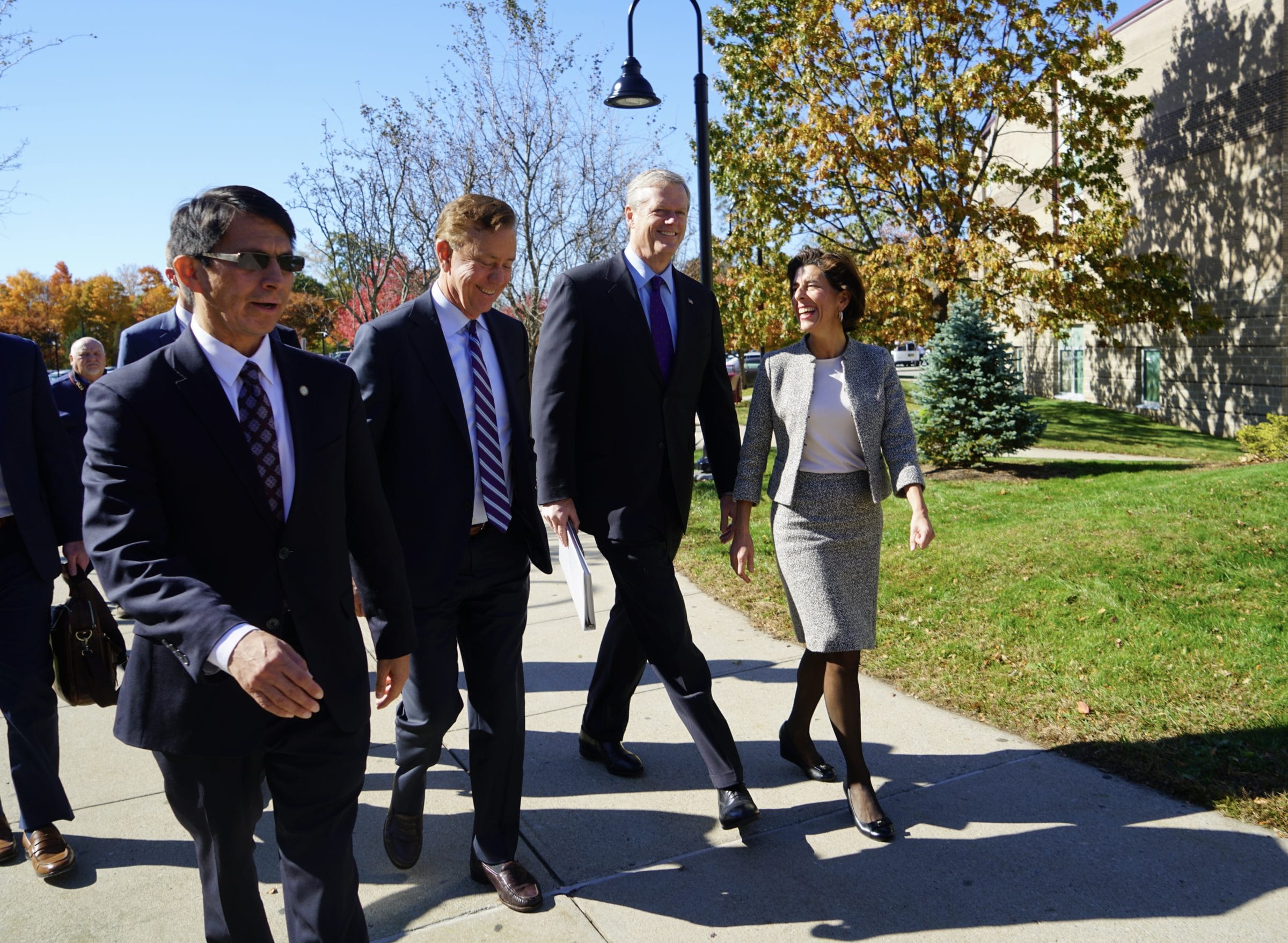 The governors also said they talked about a common regulatory approach to vaping, as Lamont did recently at a multi-state meeting in New York he co-hosted with Gov. Andrew Cuomo.

“I took action, executive action, that was evidenced-based, primarily aimed at protecting our young people,” she said. The state is now considering a longer-term approach through legislation or regulation.

Connecticut, Massachusetts and Rhode Island already are three of the nine states in a Regional Greenhouse Gas Initiative that caps carbon emissions from the generation of electricity. The governors say the states are beginning to work on a regional initiative involving transportation and climate change.

“If we are serious about climate change, and I know all three of us are, you can’t ignore transportation,” Raimondo said.

Lamont said the governors also spoke when the nuclear power station at Millstone in Waterford, Connecticut seemed in danger of closing over weakening profits, a crisis that greeted Lamont soon after he took office in January.

Dominion, the owner of Millstone, threatened to shut the plant’s two units in 2023 if it could not get a deal stabilizing its finances. That would have stripped 2,100 megawatts of carbon-free power from New England’s electric grid, including about half of Connecticut’s power.

All six New England governors agreed as part of the deal to work cooperatively “to evaluate market-based mechanisms that value the contribution that existing nuclear generation resources make to regional energy security and winter reliability.”

Lamont said the statement of regional cooperation came from calls he made.

“These are the first two people I talked to,” Lamont said. “We are in the same energy eco-system. We had to work together on an issue like this, and we solved it.”