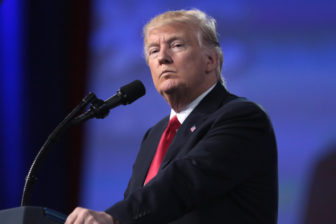 Washington – When the U.S. House of Representatives votes on a resolution this week, and likely passes it, the impeachment inquiry of President Donald Trump will enter a new phase.

“The resolution lays the framework for the investigation going forward, describes the rules and structure of public hearings to share the information with the American people, and provides mechanisms for the minority party to be involved,” said Rep. Jim Himes, D-4th District, a member of an investigative panels that will soon conduct its work in public.

The resolution, which is scheduled for a vote Thursday, will formalize the process initiated last month.

It will allow the House Judiciary Committee to review the evidence gathered so far in the probe. That’s important because the committee is tasked with producing any articles of impeachment, the set of charges drafted against a public official to initiate the impeachment process.

Approval of the impeachment resolution is likely to garner the support of all five of Connecticut’s members of the U.S. House and most, if not all, of their Democratic colleagues. It would usher in a new phase of the impeachment inquiry – public hearings held by the House Intelligence Committee.

So far, the impeachment inquiry has been conducted behind closed doors by Democratic and Republican members and staff of three committees – the intelligence panel and the committees on Government Oversight and Reform and Foreign Affairs.

The questioning is conducted in a room in the U.S. Capitol designated as a Sensitive Compartmented Information Facility, or SCIF, where sensitive information can be viewed and discussed without the risk of spying.

Republicans used an SCIF for their investigations of the Benghazi attack and in other probes, but have decried its use in the impeachment process as a “sham” and lambasted House Democrats for conducting the process behind closed doors.

Picking up the pace

While the closed-door interviews will continue for a while, despite Democrats picking up the pace by questioning multiple witnesses at a time, the impeachment resolution sets the procedure for public hearings.

The resolution gives the top Democrat and Republican on the Intelligence Committee, and their staffers, 90 minutes to question a witness and then allows the rest of the panel’s members, including Himes, five minutes each to continue the questioning. 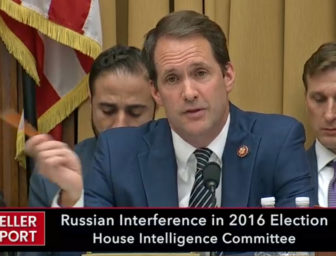 As the impeachment inquiry moves out of a secured room to public view, Rep. Jim Himes’ profile is likely to rise.

“Following in the footsteps of previous impeachment inquiries, the next phase will move from closed depositions to open hearings where the American people will learn firsthand about the president’s misconduct,” said a joint statement from Intelligence Committee Chairman Adam Schiff and other Democrats who head committees involved in the investigation.

The resolution also gives Republicans something for which they have been clamoring – the ability to call their own witnesses and issue subpoenas. But those requests will ultimately be subject to a vote of the Democratic-majority committee — a practice used by the Republican majority in the 1998 impeachment of President Bill Clinton.

The resolution also allows for the release of deposition transcripts, which will likely be redacted for national security reasons.

“As the investigation moves into its next phase, our top priority remains representing the American people in this inquiry and ensuring the process is fair and expedient,” Himes said.

At the end of the House process, the chamber will vote on articles of impeachment. It is not clear yet whether the articles will be limited to charges that Trump abused his power by pressuring the Ukrainian government to investigate political rival Joe Biden or include additional allegations.

Trump has maintained that a controversial conversation with the president of Ukraine in which he mentioned Biden and the former vice president’s son Hunter was a “perfect call” and that the impeachment inquiry is a  “witch hunt” by Democrats seeking to nullify the 2016 elections.

If reported out of the House, the articles of impeachment would go to the Republican-controlled Senate, which would hold a trial overseen by the chief justice of the United States.

The House would send over a team of “managers” to play the role of prosecutors. Trump would have his defense lawyers at the proceedings and Senators would serve as a jury.

Several GOP senators this week said their roles as potential jurors prevent them from commenting on damaging information about Trump revealed by witnesses in the House inquiry.

“It’s important not to prejudge until we have the entire picture,” said Sen. Susan Collins, R-N.H. “I am very likely to be a juror so to make a predetermined decision on whether or not to convict a president of the United States does not fulfill one’s constitutional responsibilities.”

If at least two-thirds of the senators find the president guilty, he is removed from office and the vice president takes over as president. There is no appeal.

Earlier this month, Senate Majority Leader Mitch McConnell gave fellow Republican senators a preview of how the trial would be held.

McConnell said the trial would start in the early afternoon each day, six days a week.

He also said the House could pass articles of impeachment by Thanksgiving and the Senate could then finish its trial by Christmas.

That’s unlikely now, since House proceedings are likely to bleed into December to accommodate the public hearings.