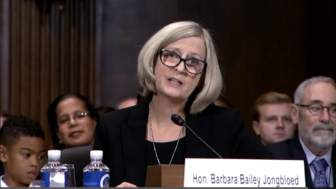 Jongbloed, 60, has served 19 years as a judge on Connecticut’s Superior Court. She was chosen by President Donald Trump to replace retiring Judge Alvin W. Thompson on the U.S. District Court for the District of Connecticut.

Unlike some of  the controversial Trump nominees to the federal bench, Jongbloed has the support of her home state Democratic senators and is virtually assured confirmation.

Sen. Chris Murphy, D-Conn., introduced the nominee to members of the Senate Judiciary Committee, praising the Madison resident’s work on the Superior Court and her involvement in the New Haven community.

Murphy also thanked the White House for working with him and fellow Democratic Sen. Richard Blumenthal in vetting candidates for the District Court vacancy, a collaboration that resulted in Jongbloed’s nomination.

“I think her selection shows how we can pick good choices for the federal bench when the administration is willing to work with U.S. senators, even when we are members of different parties,” Murphy said.

“She has an outstanding record of accomplishment,” he said. “I look forward to her swift confirmation.”

In a brief address to the committee, Jongbloed introduced the family members present in the committee room and said the confirmation hearing was taking place on her 31st wedding anniversary.

Sen. Dianne Feinstein of California, the senior Democrat on the Judiciary Committee, seemed to take for granted that Jongbloed would be confirmed.

“What aspect of your work as a state trial judge do you think will be the most relevant to the work you will do as a federal district judge?” Feinstein asked.

Jongbloed replied “one of the most important things I will bring with me is the sense of … how important matters are to people who appear before us.”

Another nominee to the federal bench considered in Wednesday’s hearing had a much tougher time than Jongbloed.

Lawrence J.C. VanDyke , a nominee for the California-based 9th U.S. Circuit Court of Appeals, grew emotional when asked about a letter from  American Bar Association that said it conducted 60 interviews and concluded the nominee was “not qualified” for the judicial branch.

The letter said “some interviewees raised concerns about whether Mr. VanDyke would be fair to persons who are gay, lesbian, or otherwise part of the LGBTQ community.”

“I do not believe that,” Van Dyke said. “It is a fundamental belief of mine that all people are created in the image of God.”