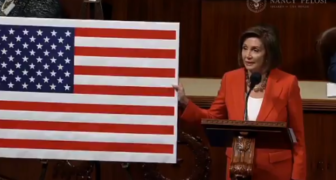 Speaker of the House Nancy Pelosi urged members of the House of Representatives to formalize the impeachment process against President Trump.

Washington – Connecticut’s House Democrats were united Thursday on an impeachment resolution they say will provide both a road map and transparency to the investigation of President Donald Trump.

Their GOP colleagues, however, called the resolution an undemocratic “sham.”

The 232-to-196, largely party-line vote to approve the resolution will continue the partisan fighting that has enveloped the impeachment probe. Every House Republican voted against it, joined by two Democrats.

Bringing the resolution to a vote is seen as a sign of Democrats’ confidence they can mount a full-fledged impeachment case against Trump.

After the vote, House Republican whip Steve Scalise described the resolution, which would establish procedures for public hearings, as a “sham” and a “Soviet-style” process that shuts out the GOP.

Democrats, including Rep. Jim Himes, D-4th District, countered that the rules established by the resolution afford the president more rights than either Richard Nixon and Bill Clinton had when they faced an impeachment process.

“There is no process that would satisfy the Republicans,” Himes said. “The president could shoot someone on Fifth Avenue and Republicans would find him innocent.”

“There is no process that would satisfy the Republicans. The president could shoot someone on Fifth Avenue and Republicans would find him innocent.”

Rep. Joe Courtney, D-2nd District, also defended the impeachment resolution, saying it gives House Republicans and the White House everything they had been clamoring for.

“At some point, they have to take ‘yes’ for an answer,” Courtney said.

The resolution allows the president and his counsel to request and question witnesses and participate in impeachment proceedings once the process reaches the Judiciary Committee, which is tasked with writing any articles of impeachment that would be voted on by the House.

The resolution also establishes the rules for the Intelligence Committee to hold public hearings. Since the impeachment inquiry was initiated last month, depositions of witnesses have been held behind closed doors in a secure room. That process has been criticized by the GOP, although Republican members of the committees involved in the inquiry and their staffers were allowed to participate.

“This is the moment that history will write. History will ask you, when you cast this vote, when you cast a vote to justify something that has gone on behind closed doors, I want you to ask the historian and answer the question — what do you know that happened there?” said House Minority Leader Kevin McCarthy, R-Calif., in a floor speech before the vote.

After the resolution was adopted, Stephanie Grisham, the White House press secretary, said that the House had approved a process that was “unfair, unconstitutional and fundamentally un-American.”

“The president has done nothing wrong,” she said, “and the Democrats know it.”

Courtney, however, lauded the shift in procedures in the impeachment inquiry.

“The average person is going to see in public what has so far been limited to questioning witnesses behind closed doors,” he said. “I think that will be a welcomed change.” 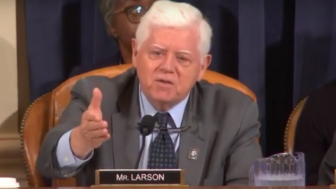 “The whole unfolding of what transpired in Ukraine will be public now,” he said.

House Democrats began the impeachment process upon the emergence of a whistleblower complaint that Trump pressured the president of Ukraine to investigate Joe Biden and the former vice president’s son, Hunter.

The impeachment resolution also authorizes the House Intelligence Committee to release transcripts of its closed-door depositions to the public.

Himes, a member of the Intelligence Committee who will soon be able to question witnesses in public, said he did not expect many new revelations about the president’s conduct with Ukraine.

“The facts about what happened have already come out. They are not in dispute,” Himes said, referring to the pressure on a foreign government to investigate Biden and to the firing of a U.S. ambassador to Ukraine who was critical of Trump policy.

Himes said the public hearings would “dot the i’s”  and flesh out what he said are abuses of power by the president.

“Most of our fact-finding is done,” he said.

Himes also said that, besides issues related to Ukraine, some of the incidents of apparent obstruction of justice cited in former special counsel Robert Mueller’s report could become part of the articles of impeachment drafted by the Judiciary Committee.

“But that’s obviously a decision for Speaker Nancy Pelosi,” he said.

Rep. Rosa DeLauro, D-3rd District, called Thursday “a solemn day for our country.” Nevertheless, she said, the impeachment inquiry was required because “President Trump and his administration’s continued stonewalling is shredding the rule of law,” referring to the administration’s refusal to turn over information and cooperate with subpoenas of witnesses in investigations into Russian meddling in the 2106 election.

Those investigations will continue, said Larson, who sits on the House Ways and Means Committee, one of the six panels that will continue separate probes of the Trump campaign and the Trump administration.

Connecticut’s senators will become jurors in an impeachment trial in the Senate if the House votes out articles of impeachment.

“This strong vote charts a clear path forward for the House’s impeachment inquiry into President Trump’s unacceptable, unpatriotic, and unconstitutional conduct,” he said.