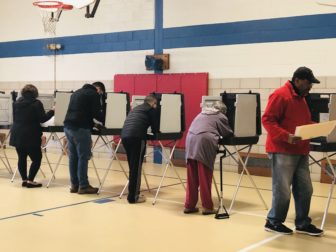 Unlike others who went to the polls Tuesday across the nation, Connecticut voters did not send a clear message in yesterday’s municipal elections.

Both state Democratic and Republican parties flipped seats and claimed victories. But Connecticut voters largely seemed motivated by local issues — and the efforts of individual campaigns — than by anything else.

Connecticut did follow one national trend, though. Both Democrats and Republicans say they fielded many more female candidates than usual, and many first-time candidates won.

“We elected a ton of women for mayor and first selectmen last night,” said J.R. Romano, chairman of the Connecticut Republican Party.

Democrats won East Haven and Litchfield, two towns that voted for Trump in 2016. Those were open seats, as was the seat won by 27-year-old Democrat Ben Florsheim in Middletown, but he ran against a Republican who had once been the town’s mayor.

Republicans had some victories, too. Sen. Cathy Osten, a powerful appropriator in the state legislature, was denied a seventh term as Sprague’s first selectman. Voters instead chose Republican rival Cheryl Allen Blanchard.

In Old Lyme, Republican Timothy C. Griswold beat Democrat Bonnie Reemsnyder, whose political future was damaged after she was forced to step down as chairman of the Connecticut Port Authority amid claims of mismanagement last July.

The GOP also maintained its hold on the cities of New Britain and Danbury.

“From the beginning of this election cycle, there has been a lot of enthusiasm among Democrats,” she said. “We had more women, more diversity and more first-time candidates than any time in recent memory, something the candidates themselves attributed to Donald Trump.”

Wyman said Democrats flipped top leadership in 11 towns, swept undertickets in others, and held seats like Middletown that Republicans were favored to win.

But the strong Democratic tide that flipped Virginia’s state House and Senate to party control and gave the Kentucky Democratic candidate for governor a boost Tuesday night was not on display in Connecticut.

Those Democratic victories were seen as a troublesome sign for President Donald Trump.

The Republican incumbent in the Kentucky governor’s race, Matt Bevin, trailed his Democratic rival Andy Beshear, who has declared victory, by about 5,000 votes.

Bevin has not conceded, however, and has asked for a recount of the tally. The Kentucky governor, whose political fortunes were not helped by a massive rally Trump the day before the election, has Connecticut ties.

His family has manufactured bells in East Hampton since the early 1800s. Before entering politics in Kentucky, Matt Bevin ran the factory and was given a $200,000 grant from the Connecticut state government to help relocated the Bevin Brothers Bell Factory after a fire destroyed the facility and a nearby house.

Although there’s evidence turnout was higher than usual in other parts of the nation, that has not been determined in Connecticut, where some towns reported turnout as low as 11% and others higher than 60%.

But not all turnout results in the state are known. Connecticut Secretary of the State spokesman Gabe Rosenberg said a number of Connecticut towns have not reported final figures.