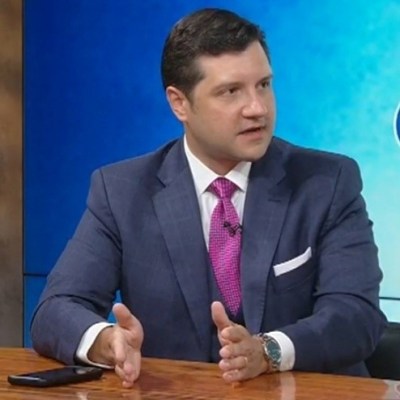 Andrew Bakaj, a Stamford native, is representing the whistleblower who touched off the Trump impeachment inquiry.

Washington – The lawyer representing the whistleblower who touched off the impeachment inquiry of President Donald Trump is a Connecticut native who has distinguished himself by representing members of the intelligence community who report wrongdoing.

Andrew Bakaj, who was born and raised in Stamford and graduated from Trinity Catholic High School in 1999, was drawn to national security as a law student at Syracuse University, where he attended a unique program at the Institute for National Security and Counterterrorism that focused on national security legal issues — and the nation’s spy agencies.

“You don’t learn how to protect whistleblowers in law school, you do that in practice,” said the institute’s founder, Syracuse law professor William Banks. “But you can get the background for the laws that govern whistleblowers in your legal education.”

Bakaj, 37, who did not respond to requests for an interview, has dedicated his career to the very specialized national security legal field.

He was an investigator in the inspector general’s offices at both the CIA and the Department of Defense, working on probes into whistleblower reprisals.

That work, implementing former President Barack Obama’s directive to protect intelligence agency whistleblowers, provoked retaliation by his superiors, who wanted to out whistleblowers within the CIA.

So Bakaj reported his superiors and became a whistleblower himself, said Irvin McCullough, a national security analyst at the Government Accountability Project.

“He knows first-hand how difficult it is to be a whistleblower,” McCullough said.

And whistleblowers in an intelligence agency, as were Bakaj and his anonymous client, a CIA analyst, are subject to unique constraints that don’t bind those who reveal wrongdoing at other federal agencies.

“He knows first-hand how difficult it is to be a whistleblower.”

In other parts of the government, whistleblowers can take claims they have been retaliated against to independent administrative agencies and, potentially, federal courts. In the intelligence agencies, complaints are handled internally.

When he ran into trouble at the CIA in 2014, Bakaj reached out to Mark Zaid, a well-known national security attorney, for help.

Now Zaid is Bakaj’s co-counsel representing the person who blew the whistle when he learned of the substance of Trump’s phone call with Ukrainian President Oleksandr Zelensky. In that phone call, Trump asked Zelensky to investigate former Vice President Joe Biden, a 2020 presidential contender, and Biden’s son Hunter, who once had business interests in Ukraine.

That fight has become gargantuan as he and Zaid struggle to keep the identity of their client anonymous while Trump and his GOP allies try to expose and discredit him.

McCullough — whose father, Charles McCullough, is the third partner of the Compass Rose Legal Group that includes Bakaj and Zaid — said the whistleblower in the Ukrainian case could not have better representation.

“(Bakaj) knows how to face a behemoth and the need to share what’s wrong with the proper authorities that can correct the improprieties,” Irvin McCullough said.

In his resume, Bakaj says he is “a subject-matter expert on federal whistleblower reprisal law and investigations.” 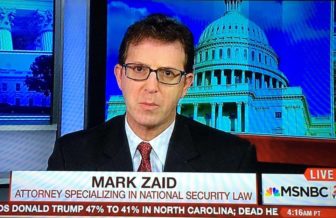 Zaid told the Washingtonian that the whistleblower first came to Bakaj as “a typical case referral,” and Zaid was brought in to help.

“I am writing to respectfully request that you counsel your client on the legal and ethical peril in which he is placing himself should anyone be physically harmed as a result of his, or his surrogates’, behavior,” Bakaj wrote, adding that the president is “engaging in rhetoric and activity that places my client, the Intelligence Community Whistleblower, and their family in physical danger.”

“Let me be clear: Should any harm befall any suspected named whistleblower or their family, the blame will rest squarely with your client,” Bakaj wrote.

“Let me be clear: Should any harm befall any suspected named whistleblower or their family, the blame will rest squarely with your client.”

Trump on Monday responded in a tweet that said the whistleblower and Zaid “should be investigared [sic] for fraud!”

Trump and his GOP allies have seized on tweets written by Zaid in 2017 that predicted Trump would be impeached.

Besides demanding that the whistleblower’s identity be made public, Trump has also compared the person to a “spy.”

“In the ‘old days,’ spies were summarily executed,” Trump said.

Bakaj has offered to provide written responses from his client to questions posed by the congressional committees conducting the impeachment inquiry. But he rejected calls for his client to testify in person, saying that everything the whistleblower disclosed in his complaint about Trump’s phone call has since been corroborated — by a partial transcript of that July 25 call released by the White House and by a number of government officials who have been questioned as part of the impeachment inquiry.

Attempts to protect the whistleblower’s identity will be further tested at public hearings in the House Intelligence Committee that begin on Wednesday.

In his Linkedin profile, Bakaj indicated that he began his legal career as a law clerk with the corporation counsel’s office for the city of Stamford in 2004, a job he took after a short stint as an intern at the U.S. Embassy in Ukraine.

He then transferred to Washington D.C., where he worked for the Justice Department, in private practice, and then for the inspector general’s offices at the Pentagon and the CIA.