Washington – U.S. Rep. Jim Himes on Tuesday came to the defense of impeachment inquiry witnesses derided by President Donald Trump as  “Never Trumpers” and accused the president of trying to intimidate them.

Himes asked Lt. Col. Alexander Vindman, a senior National Security Council official who testified in military uniform Tuesday, about the medals on his chest — an infantry medal awarded for combat and a Purple Heart given to those who are wounded in combat. Himes expressed outrage at GOP questioning of Vindman, who emigrated as a toddler with his family to the United States from Ukraine.

“Colonel Vindman, multiple right-wing conspiracy theorists, including (Trump attorney) Rudy Giuliani, have accused you of harboring loyalty to Ukraine,” Himes said. “They make these accusations based only on the fact that your family, like many American families, emigrated to the United States. They have accused you of espionage and dual loyalties.”

Himes says GOP questions about Vindman being offered a job as Ukraine defense minister amount to veiled attacks — “cloaked in a Brooks Brothers suit” — on his loyalty, thereby giving the “right-wing media” ammunition to   attack Vindman.

“It’s what you stoop to when the indefensibility of your case requires that you attack a man when he’s wearing a Springfield rifle on a field of blue above a purple heart,” Himes said.

He also asked Vindman about Trump referring to him as a “Never Trumper.”

“Tell Jennifer William, whoever that is, to read both transcripts of the presidential call and the just released statement from Ukraine. Then she should meet with the other Never Trumpers who I never heard of and work out a better presidential attack,” Trump’s tweet said.

Himes asked, “Miss Williams, are you involved in a presidential attack?” 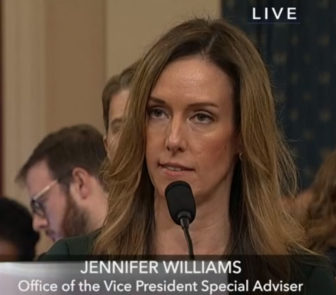 She said she was surprised by the president’s tweet.

“It surprised me, too,” said Himes. “It looked like witness tampering in an effort to get you to, perhaps, shape your testimony today.”

Vindman testified that the July 25 phone call between President Trump and Ukrainian President Volodymyr Zelensky that is at the heart of the impeachment inquiry was “improper” and prompted him to report it to an NSC lawyer.

Unlike the witnesses who appeared before the panel last week, several of Tuesday’s witnesses listened to the Trump-Zelensky call and have first-hand knowledge of what was discussed.

“I thought that the references to specific individuals and investigations… struck me as political in nature given that the former vice president is a political opponent of the president,” said Williams.

Vindman testified that Zelensky’s election in April created an “unprecedented opportunity” to realize the U.S. objective of supporting Ukrainian sovereignty and “a free and Democratic Ukraine.”

But he said the actions of Giuliani and other Trump allies in Ukraine raised red flags.

Vindman said the National Security Council and the State Department “grew increasingly concerned about the impact such information was having on our country’s ability to achieve our national security objectives.”

Rep. Devin Nunes, the senior Republican on the House Intelligence Committee, spent a portion of his opening statement criticizing the media, calling journalists “puppets of the Democratic Party.”

Nunes also said Democrats are fighting to protect the anonymity of a CIA whistleblower who launched the impeachment inquiry by making a complaint to an inspector general about the Trump-Zelensky call.

Nunes said Democrats are protecting the CIA analyst because “the whistleblower would have to answer problematic questions” about his political allegiance and other topics.

“I want to make sure that there is no effort to out the whistleblower through these proceedings,” Schiff said. “If the witness has a good-faith belief that this may reveal the identity of the whistleblower, that is not the purpose we’re here for.”

In an afternoon session, the panel heard from two witnesses called by Republicans.

Kurt Volker, Donald Trump’s former envoy to Ukraine said he rejected a “conspiracy theory” promoted by Giuliani that Biden used his influence to quash a probe that could involve his son.

Volker said allegations against Biden are ”self-serving and not credible” and that he’s known the former vice president for more than two decades and believes him to be an honorable man.

In his opening statement,  Volker testified that he did not realize that Trump’s campaign to pressure the Ukrainians to investigate Burisma, a Ukrainian energy company that hired Hunter Biden for its board, was really a request for a politically charged probe intended to boost the president’s 2020 prospects.

“I saw them as very different — the former being appropriate and unremarkable, the latter being unacceptable,” Volker said. “In retrospect, I should have seen that connection differently, and had I done so, I would have raised my own objections.”

Volker described the attempts of the NSC and the State Department to convince Trump that Zelensky was a reformer and that military aid the president had blocked should be released to Ukraine. But Volker said Giuliani and others had poisoned the president’s mind about Ukraine.

“He was clearly receiving other information from other sources, including Mayor Giuliani, that was more negative, causing him to retain this negative view,” Volker said.

Meanwhile, Tim Morrison, a former National Security Council expert on Russia, testified that the reason he sought to secure the rough transcript of Trump’s July 25 call with Zelensky was to avoid leaks, not because the call was inappropriate.

Asked if he had any concerns at all about Trump’s call, Morrison said “no.”

During his turn questioning the witnesses, Himes said Trump had described his phone call with Zelensky as “perfect” 11 times, but that it “seemed to me” it was not pressing the Ukrainian president to fight corruption in his country but rather “aiming corruption at the vice president.”

He asked Morrison if he ever heard Trump mention CrowdStrike, a server that was supposedly being held in Ukraine. That server was invoked by Trump because the CrowdStrike company helped the Democratic National Committee investigate a 2016 hack by Russian operatives who were trying to influence the presidential elections.

“I believe so, yes,” Morrison replied.

Himes then asked if he had heard the president mention the Bidens.

Himes then asked if a Ukrainian investigation into CrowdStrike and the Bidens was “official U.S. policy toward corruption in Ukraine?”

Morrison said “it was the first he had heard of it.”

Himes also asked why nothing was done about the activities of Gordon Sondland, the U.S. ambassador to the European Union, who pressed for an investigation of CrowdStrike and the Bidens and wanted Zelensky to make a public statement that Ukraine was conducting these investigations in return for a meeting with Trump in the Oval Office.

“It caused you to roll your eyes,” Himes said of Sondland’s actions, and “it was characterized as a “Gordon problem” and a “drug deal” by former National Security Council John Bolton.

Morrison had testified earlier that his predecessor warned him about the “Gordon problem,” referring to Sondland, and that he responded by tracking Sondland’s efforts in the context of Ukraine without necessarily participating in or endorsing them.

Morrison deflected Himes’ questions about the lack of any initiative to “rein in” Sondland, who will face Himes and the other members of the Intelligence Committee as the panel’s  morning  witness on Wednesday.

Himes asked Volker “what specifically in (Trump’s) call to the Ukrainian president did you find unacceptable or troubling?”

“It’s the reference to the vice president,” Volker responded.