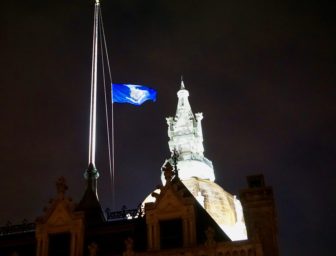 The state flag flying at half-staff over the Capitol in memory of Linda Orange.

Rep. Linda Orange, D-Colchester, who announced 12 days ago she had pancreatic cancer and would resign before the next session opened in February, died Wednesday.

A police officer immediately climbed to the rooftop of the State Capitol to lower the Connecticut flag to half-staff as legislative leaders praised Orange as a larger-than-presence in the General Assembly in her career as a staffer and then a lawmaker.

“The House Democratic caucus is missing a bright light today,” said House Majority Leader Matt Ritter, D-Hartford. “Linda Orange’s legacy is about stand-ing up for first responders across the state, standing up for her constituents and standing up for her family. Linda was one of the strongest legislators that I have known.”

Orange worked as a staffer at the General Assembly for four years before her election in 1996 to the 48th District of Colchester, Lebanon, Mansfield and Windham, a mix of rural and suburban communities, where the constituents include ardent gun owners and University of Connecticut faculty.

When the State Police curtailed the hours of Troop K in Colchester, Orange “battled the entire State Police hierarchy to ensure Troop K’s doors were open and its dispatch center was staffed,” Ritter said.

House Speaker Joe Aresimowicz, D-Berlin, called her a good friend and a beloved and respected colleague who continued to work after her diagnosis.

“Rep. Orange was one of those rare people who truly gave back to society more than she took,” he said. 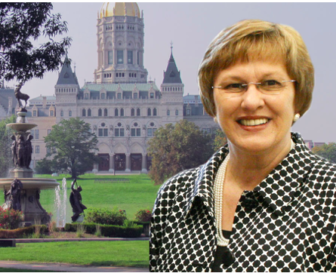 Gov. Ned Lamont said state flags would remain at half-staff until her burial. No funeral arrangements were immediately announced.

“She had an undeniably witty sense of humor and a charming character that brightened even the gloomiest of days,” Lamont said of Orange. “In particular, she will be remembered as being one of the most ardent champions advocating on behalf of our state’s first responders. She did lasting good work for Connecticut, and she will be missed.”

As a leader of the legislature’s sportsman’s caucus, she voted against the sweeping gun-control legislation passed in response to the Sandy Hook school shooting in Newtown. But overall, she was a reliable Democratic vote on budgets, minimum-wage increase and criminal-justice reforms.

As a legislative staffer, Orange clerked for the Human Services Committee when the co-chair was state Rep. Joe Courtney, now the congressman from the 2nd Congressional District.

“Linda was an outstanding legislator, and I’m grateful to have had the opportunity as a former member of our State Legislature to watch her first foray into public service when she clerked for the Human Services Committee in the General Assembly,” Courtney said. “Linda had a knack for working with people and achieving real results.”

“To say our hearts are heavy at hearing of the loss of our beloved Linda Orange would be an understatement,” Klarides said. “Linda’s passion for her family and the state of Connecticut was unsurpassed.”

“Linda Orange was a relentless and tenacious fighter, she had a huge heart and a ready laugh,” said U.S. Sen. Richard Blumenthal, a Democrat. “I prized her wisdom and admired her unstinting work ethic and integrity. Most important, I treasured her friendship. My heart is with her family whom she loved so dearly and her constituents whom she served so loyally.”

Nancy Wyman, the Democratic state chair, said, “Connecticut has lost a great champion, not just for her district, but for the entire state.”

Under state law, Lamont now will have 10 days to issue a writ for  a special election, which must be held 46 days later.