Hayes talks impeachment, stress, and being a mom in Congress 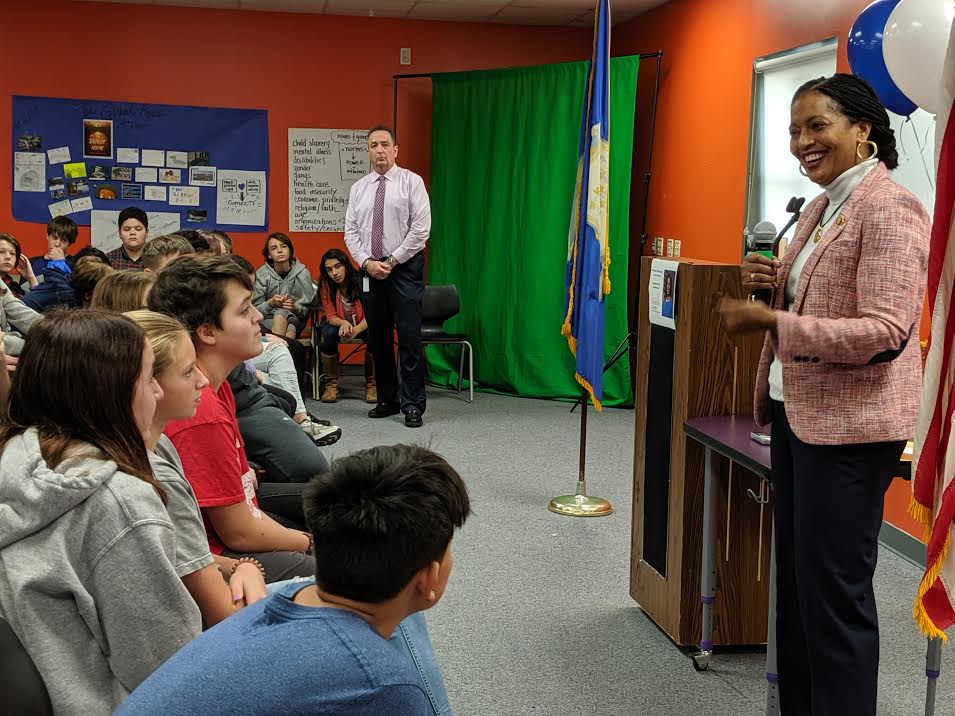 Woodbury — With the House of Representatives wrapping up a marathon week of public hearings on impeachment, Rep. Jahana Hayes faced some intense questioning of her own Friday from a group of eighth graders.

Hayes, D-5th District, a longtime history teacher in Waterbury and a former National Teacher of the Year before she was elected last year, spent her morning at Woodbury Middle School fielding questions about everything from handling stress to — you guessed it — impeachment.

When Hayes was asked if she has been part of the Democratic-led impeachment investigation of President Donald Trump’s conduct regarding Ukraine, she said her “teacher brain” kicked in when it became clear that the House would go forward with the impeachment process and she immediately tweeted.

But it wasn’t a tweet about her position on impeachment. It was to explain the impeachment process.

“On the other side of this, we all have to heal together.”

“There were a lot of people — which floors me — who thought that by saying we’re moving toward impeachment, it meant a moving truck was going to pull up to the White House and remove the president,” Hayes said. “And this is not how it works. This is the first step in the information-gathering process and I was floored by how many people did not understand it.”

Hayes said she voted for the inquiry and public hearings because she thought that with all the speculation and questions about the president’s actions, those were reasonable steps. But she has been careful not to predict what will happen or even offer an opinion about the proceedings.

“I have been purposeful and intentional not to be summarizing or synthesizing what I see every day,” she said. “I say people can see for themselves. They can hear for themselves. They don’t need me to to tell them what they’re seeing to try to convince them to believe something else.” 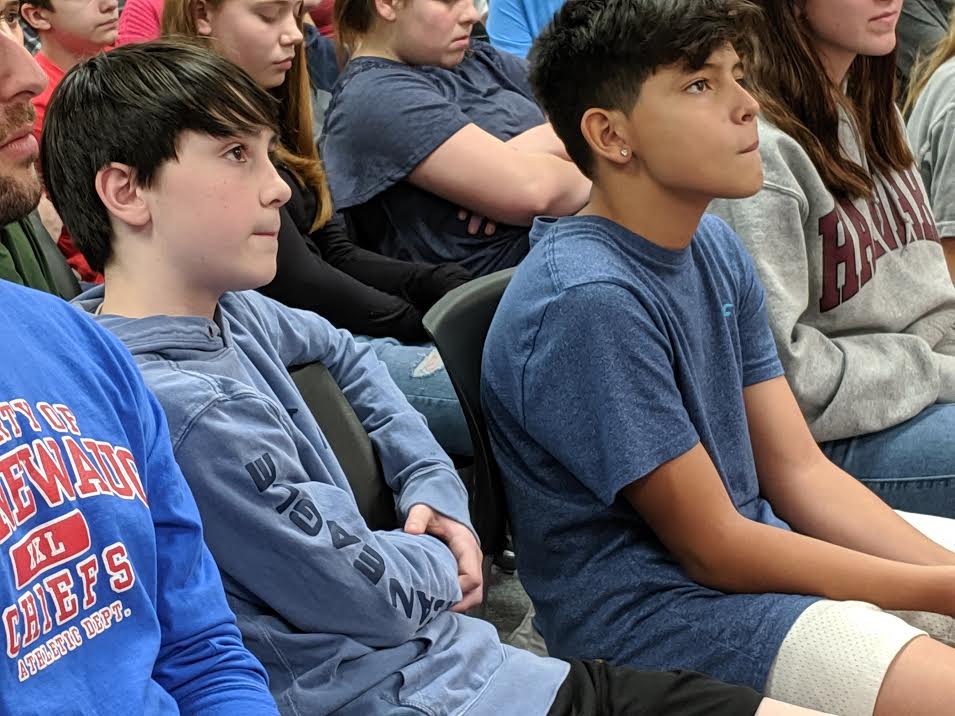 Dayton Griffin, left, a Woodbury eighth-grader, asked Rep. Jahana Hayes, D-5th District, if it was challenging to have about half her district registered as Republicans.

No matter what happens, when it’s all over, Hayes said, “Our country will be in a very dark place … On the other side of this, we all have to heal together.”

But Hayes, who started her hour with the students with the observation that “it feels right to start my day in a school,” talked about far more than impeachment.

The work of a congresswoman is shrouded in mystery, she said, but it shouldn’t be.

“I think that if you pulled back the curtain and really saw how all of my work is contingent on the active participation of people in our communities, it wouldn’t seem that exciting or interesting or fascinating,” Hayes said. “And the other thing that you would realize is that it’s one of those things where everyone should have access to it.”

The most frustrating aspect of her job, she said, is the partisanship.

“In D.C., it’s very different than here,” Hayes said. “In D.C., everything is defined by the letter after  your name. Either you are a Republican or a Democrat and people are surprised when they see that you are friends with a Republican or you are having lunch with a group of Republicans.

“Congress doesn’t change you, it reveals who you are.”

“So for me that is frustrating, this idea that you don’t first see people, and it doesn’t have to be like that. I hope we can get better in that area.”

“You have to have some type of self-preservation,” Hayes answered. “I go to church every Sunday, no matter where I am, no matter what I’m doing. I don’t schedule anything around church and for me, that’s what keeps me grounded.”

“Congress doesn’t change you, it reveals who you are,” she added. “I went to Congress because I truly believed that I could have an impact on outcomes in my community. I truly believe that people helped me and I want to help somebody else.”

Another student asked if she had inspired her own family, to which Hayes gave a yes and no answer because of the difficulty of juggling family life as a member of Congress. 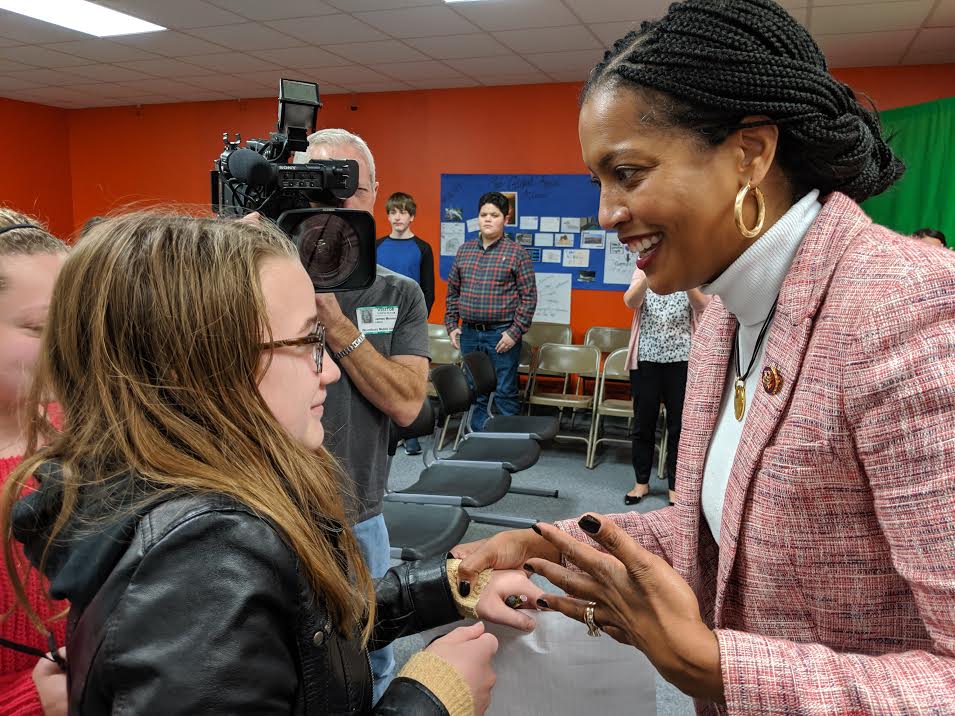 Three of her four children are older and out of the house, Hayes said, but she has an 11-year-old son who thought it was all “super cool on election night … but now when I’m taking meetings and he’s sitting there, he’s like, ‘How much longer for this Congress stuff?’ ”

Congress, she said, was not made for someone “who has small children.”

“We FaceTime and do homework now. I’m flying back and forth, I’m trying to bring him to DC,” she said. “My husband has a lot more on his plate. [The job of a congressman] really is not made for the average person and I think that’s a problem.”

She said there’s a committee studying how to modernize Congress so that more people can consider running for office.

At the close of the discussion, students lined up to talk for a moment with Hayes or get a photo taken with her.

One of those students, Sage Samuelson, who was was trembling with excitement as she spoke, told Hayes she’d like to be a lawyer some day and, maybe, the first woman president.

“You know what, you don’t even think about being the first,” Hayes told Sage. “I didn’t even realize that I would be the first African American woman [to join Congress from Connecticut] until I read it in the newspaper and I was like, ‘Hey, I never thought about that,’ but then there’s this added level of pressure.

“But then you realize that if this works, no one else will ever have to try to kick that door open again,” she said. For others who follow, Hayes said, “It gets that much easier.”