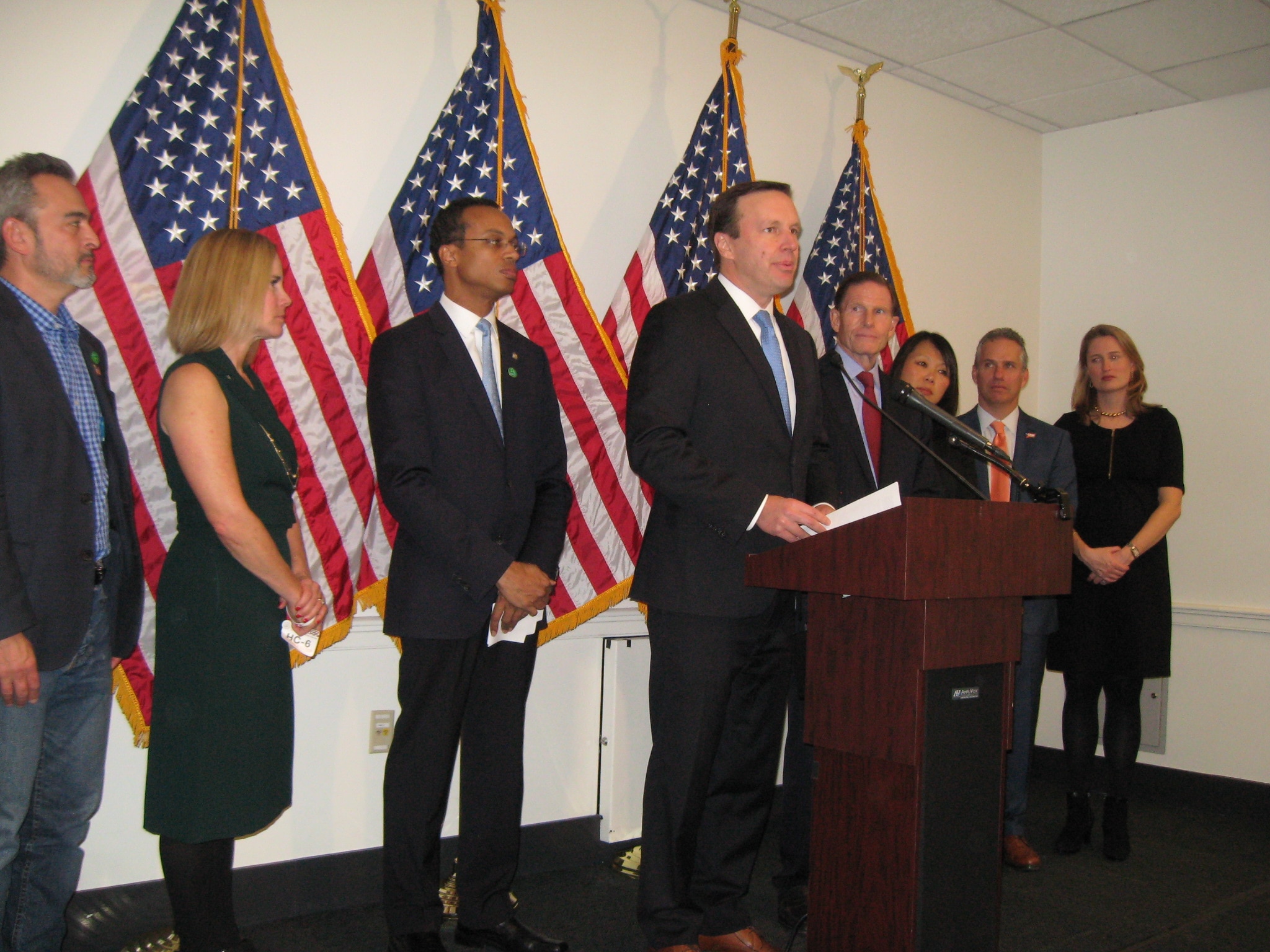 Washington – The day after Connecticut State Treasurer Shawn Wooden announced he was divesting the state pension fund of any investment in gun stocks, he brought his “Responsible Gun Policy” tour to Washington D.C. to try to persuade other states to follow his lead.

At an event in the U.S.  Capitol on Wednesday attended by members of the Connecticut congressional delegation and representatives from the nation’s largest gun control advocacy group, Wooden said his decision to divest $30 million in pension funds invested in companies that make ammunition is intended to pressure the gun industry to adopt safe gun practices.

“Parents across the country have grown weary of the failures of any action in Congress … grown weary of politicians who offer up thoughts and prayers,” Wooden said.

So Wooden became the pioneer of a new movement to use “the power of the purse” to influence the industry. He hopes to enlist the help of other states, and even persuade private investors to shun certain gun stocks.

“Parents across the country have grown weary of the failures of any action in Congress … grown weary of politicians who offer up thoughts and prayers.”

“I intend to engage with other state treasurers,” Wooden said.

Wooden has been personally affected by gun violence, losing a cousin to a bullet six months before “the nation lost its innocence collectively” in the Dec. 14, 2012 massacre at Sandy Hook Elementary School.

Many who applauded Wooden at the press conference had traveled from Connecticut to help commemorate the 7th anniversary of the shooting in Newtown, which claimed the lives of 20 first graders and six adults. Some were delivering “Sandy Hook anniversary letters” to members of Congress on Wednesday.

Po Murray, chairman of the Newtown Action Alliance, said Wooden has given advocates a new weapon to fight against gun violence.

Gun control advocates also told Wooden they would try to shield him from expected attacks from the gun lobby.

“We will have your back when people come after you,” Murray said.

Those attacks began on Wednesday.

“Penalizing a law-abiding industry and legions of skilled laborers who manufacture a lawful product and are breaking no laws serves no substantive purpose,” said National Rifle Association spokeswoman Catherine Mortensen. “Leaders need to prosecute and punish criminals and ensure dangerously mentally ill people get the help they need. This is an empty action that serves neither the folks investing in the fund or the citizens of Connecticut. It will have zero impact on public safety.”

“The NRA has been an impediment to common sense gun safety measures in our nation for decades,” he said in a statement. “Sadly, today is no different. Their response is both expected and shows their utter lack of understanding of the Responsible Gun Policy and the law.”

“This is an empty action that serves neither the folks investing in the fund or the citizens of Connecticut. It will have zero impact on public safety.”

Wooden also said that “if the NRA would like to have a serious and constructive dialogue on how to make the civilian gun industry safer, then I’d welcome a conversation any day to discuss my policy and other initiatives we can take to reduce gun violence.”

At the U.S. Capitol event one gun control  advocate after another predicted Wooden’s decision would prompt other states to follow.

“We have to come up with creative solutions to promote policy changes,” Murphy said. “This sends a message to the gun industry that they have to be part of the conversation as well.”

“If the NRA would like to have a serious and constructive dialogue on how to make the civilian gun industry safer, then I’d welcome a conversation any day to discuss my policy and other initiatives we can take to reduce gun violence.”

Sen. Richard Blumenthal said “hopefully (Wooden) will be setting a model for other state treasurers,” while Rep. Rosa DeLauro, D-3rd District, thanked the state treasurer “for taking us down this road.”

Wooden has divested only a fraction of Connecticut’s $37 billion pension investments.

Most of the state’s divestiture, about $28 million, was from the defense industry giant Northrup Grumman, which also manufactures ammunition for firearms purchased by civilians. 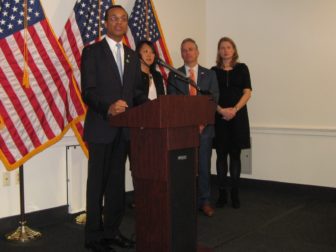 “Some may say it’s not going to have any impact,” Blumenthal said. “But even if it was only one dollar, it’s worth it.”

Wooden has also asked banks doing business with the state to disclose their gun policies and relationships with the firearm industry.

After the press conference, Wooden said the implementation of his Responsible Gun Policy should have come as no surprise, since he campaigned on that platform.

“I thought about it for a long time,” he said. “With that said, I’ve always believed that divestment is a tool of last resort.”

But he said other efforts to prod the gun industry toward change, such as efforts by shareholders to use proxy votes to pressure corporations, have failed.

“Shareholder engagement has not been very effective,” he said.

So, Wooden decided to make a bigger impact by reallocating millions of dollars in state pension funds.

But before he did, Wooden said he made sure the divestment was the right thing to do from a fiduciary standpoint.

“After a financial analysis, the conclusion was that gun securities and the gun industry was very risky, very volatile,” he said.