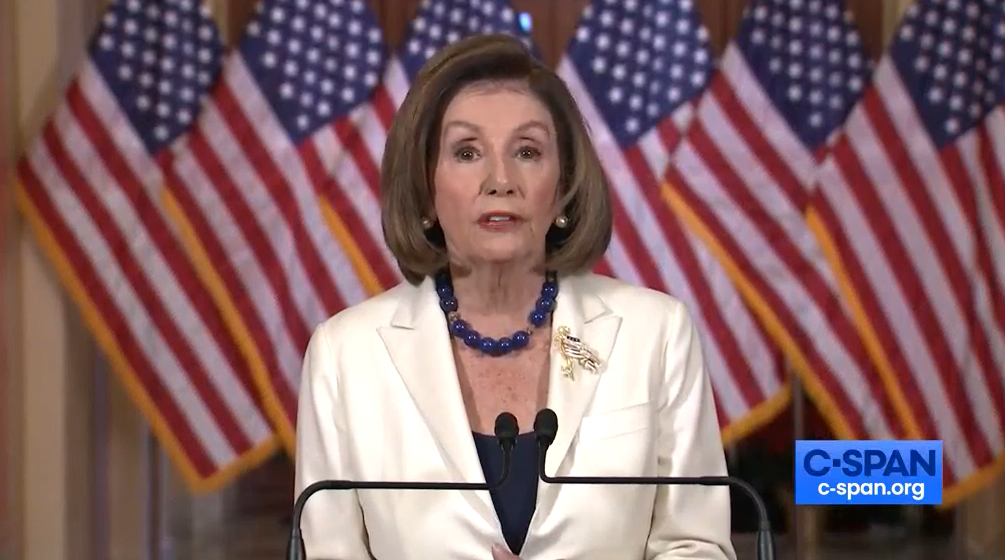 Speaker of the House Nancy Pelosi announced Thursday the House would begin drafting articles of impeachment against President Donald Trump. Trump responded by tweeting that Pelosi “just had a nervous fit.”

Washington – As House Speaker Nancy Pelosi urged Judiciary Committee Democrats to move forward with articles of impeachment against President Donald Trump Thursday, Connecticut’s lawmakers maintained their wait-and-see attitude on whether they will vote for those articles.

“Congresswoman Hayes supports drawing up articles of impeachment and will make a decision on how to vote after careful review,” said Sam Dorn, the 5th District congresswoman’s spokesman.

Fellow Democrat Rep. Joe Courtney said the House Intelligence Committee and the House Judiciary Committee have “conducted a thorough inquiry into potential abuses of the Constitution, and have done so in accordance with historical precedent and with the House’s rules.”

“I continue to support their work to follow the facts, wherever they may lead,” he said.

But Courtney also said he will determine whether to vote to impeach Trump  “if and when they are presented to members of Congress for review.”

Pelosi on Thursday said Trump’s wrongdoing strikes at the heart of the U.S. Constitution and that members of the House Judiciary Committee had “no choice but to act.”

Pelosi made her announcement shortly after Trump tweeted Thursday that House Democrats should impeach him quickly if that’s what they were going to do. The president also suggested he would call an expansive list of witnesses during a trial in the Republican-led Senate.

The impeachment effort is largely based on the allegation that Trump withheld a White House meeting and military aid sought by Ukrainian President Volodymr Zelensky to pressure the Ukrainian leader to launch an investigation into former Vice President Joe Biden and his son Hunter.

That allegation is likely to result in an article of impeachment based on abuse of power or perhaps even bribery.

The White House’s refusal to allow top administration officials to testify at the impeachment inquiry or release key documents is likely to be at the heart of a contempt of Congress article of impeachment.

And the House Judiciary Committee may also consider instances of apparent obstruction of justice that were detailed in former special counsel Robert Mueller’s report.

“The Speaker is right in saying it is time to draw up articles of impeachment,” said Rep. John Larson, D-1st District.

Pelosi pushed back when a reporter for a conservative news outlet asked her if she “hated” the president.

“She was also right to take a stand today,” Larson said. “This isn’t about disliking the president, this is about following the Constitution.”

Despite his support of Pelosi’s actions, Larson joined his Connecticut colleagues in saying, “I will consider the articles of impeachment once they are drawn up.”

Rep. Rosa DeLauro, D-3rd District, said she also supported Pelosi’s call to move forward in the impeachment process, “and I appreciate my colleagues’ work on the Judiciary and Intelligence Committees throughout this process”

“I will consider the articles when they are finalized,” DeLauro said.

While Connecticut Democrats are withholding public support for impeachment, it’s likely most House Democrats, if not all, will eventually vote to impeach Trump.

Himes is a top Democrat on the House Intelligence Committee that had the fact-finding role in the impeachment inquiry, interviewing dozens of witnesses behind closed doors and in three days of public hearings.

The intelligence panel sent a report of its findings – that the president had committed a series of misbehaviors – to the Judiciary Committee this week.

The Judiciary Committee held a public hearing Wednesday to hear academic experts in constitutional law give their opinions on whether there were grounds to impeach the president.

Like everything else in this highly partisan process, the witnesses invited by Democrats made a case for impeaching the president and the sole Republican witness said there was not enough hard evidence to impeach Trump.

The House Judiciary Committee has scheduled a second hearing on Monday that will feature both the Democratic and Republican attorneys who work for the intelligence and judiciary committees.

While the GOP on Thursday criticized what they said was a rushed impeachment inquiry, there is pressure for Pelosi to hold a vote on impeachment before Congress breaks for the holidays later this month. That would keep the process from bleeding into an election year.

Trump responded to Pelosi’s call for impeachment articles with a tweet.

“Nancy Pelosi just had a nervous fit,” the president tweeted.” She hates that we will soon have 182 great new judges and sooo much more. Stock Market and employment records. She says she ‘prays for the President.’ I don’t believe her, not even close…”

Trump also told reporters on Thursday that he’s not worried an impeachment will stain his legacy.