How they came to a $1.8 billion hospital settlement 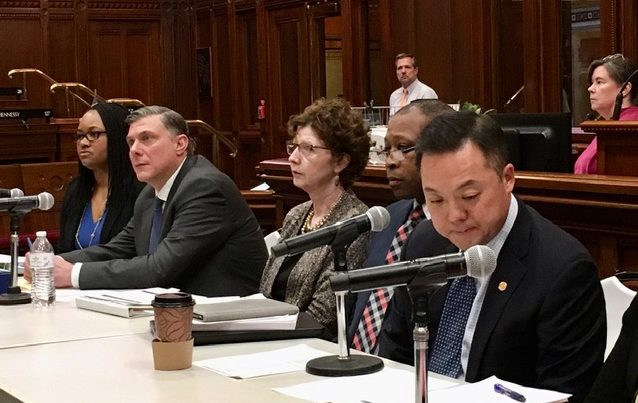 The administration of Gov. Ned Lamont pulled back the curtain Friday on the negotiations that produced a tentative settlement of a massive  hospital tax lawsuit that would pay Connecticut’s hospitals $1.8 billion over seven years, while costing the state $872 million.

Administration officials told lawmakers in an informational hearing that the settlement is structured to limit the state’s liability by leveraging $1 billion in federal funds. It raises Medicaid rates by 14 percent over seven years, and it makes supplemental payments the officials say are Medicaid eligible.

The General Assembly is returning in special session Wednesday to vote on accepting the settlement. The deal will not be deemed final until reviewed and accepted by federal Medicaid officials.

“This settlement is perhaps one of the most significant to come before you for your consideration,” Attorney General William Tong told lawmakers. “It is the product of hundreds, if not thousands, of hours of negotiations on some of the most complex financial arrangements involving our state.”

The intent was to return the tax money and a share of the added reimbursements to the hospitals. But as state deficits spiked between 2013 and 2017, the tax grew while the payments back to the industry shrank. By 2017, hospitals were paying $514 million to the state and getting a collective $78 million in return. Under a new agreement, they paid $900 million and received back about $493 million last year.

Some legislators, including those from cities with tax-exempt hospitals and universities, balked at some elements of the settlement.

Rep. Patricia Dillon, D-New Haven, and others quizzed the administration officials about a guarantee of no changes over the life of the deal to the hospitals’ current tax exemptions from municipal property taxes, corporation taxes and sales and fuel taxes.

Robert Clark, the governor’s general counsel, told the legislators the provision was essential to the deal. Without it, he said, the hospitals feared that the General Assembly would finance the settlement by eliminating some of those exemptions — making the hospitals pay for their own settlement.

“We knew this would be difficult and controversial,” Clark said. “This was not lost on us and it was not something we gave up easily on. It was just something that at the end of the day, we weren’t going to get a deal without it, to be frank.”

Dillon was one of the legislators who expressed concern that hospitals might expand into areas that are now taxable.

“I’m just saying that, like in Tennessee, at one point, it looked like half the state was exempt,” Dillon said. “You know, you had churches running theme parks. And so I just want to make sure that this is not going to be a burden on our towns that already have a lot of tax-exempt property.”

Clark noted that it does not broaden existing exemptions, nor does it protect the hospitals from general tax increases, providing that no more than 15% of the revenue from new or amended taxes come from hospitals.

“I understand and sympathize with some of the folks who are not terribly pleased with the fact that it’s a seven-year agreement, but the flip side of that is we don’t have to pay it all once,” Clark said. “We pay it back over the course of seven years, interest free. And so I think you’d have to just weigh that against the alternative, which is a potential catastrophic liability coming due all at once.”

The potential liability to the state was $4 billion. The litigation was filed in 2015 and was readied for final arguments to a judge.

Melissa McCaw, who oversees the state budget as the secretary of policy and management, said the deal was structured to leave the state with significant budget reserves in case the economy slips into recession. The deal would require $180.7 million in the current budget biennium, money that was set aside, she said.

Steve Frayne, the senior vice president  of health policy at the Connecticut Hospital Association, urged legislators to look at the settlement in a broader context: Not only did the state renege on a promise to share in the increased federal reimbursements, but it came at a time when hospitals were financially stressed.

“Our rates had been frozen since 2008 for basic medical services, and in addition to that had been cut multiple times,” Frayne said. “So we were in a position where we had gone from an aggregate loss under the Medicaid program of about $300 million a year to, in a very short period of time, that number tripled. We were essentially carrying around a loss from Medicaid, delivery of services, plus the losses of the tax of about $1 billion a year. And these were enormous changes that were not easily absorbed by the hospitals.”

The deal would provide annual Medicaid rate increases of 2% for inpatient care and 2.2% for most outpatient services on Jan. 1 in each of the next seven years. 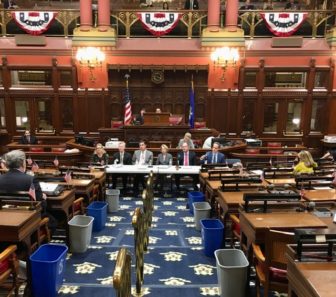 Frayne said the settlement was the result of compromise on both sides, plus a fresh start in the industry’s relationship with the state under a new governor:

“So, when we look at this — is it everything we wanted? No. Is it as fast as we wanted? No. Is it fair? Yes,” he said. “And it’s done in a way in which all of the parties’ interests are protected, so that we can wind up in a relationship in which in a collaborative way we can begin to work on other things as opposed to where we’ve been over the last several years, which is in constant fights and battles.”

The hearing Friday was conducted by four committees: Appropriations, Finance, Public Health and Human Services. They had the opportunity to question two panels of witnesses: the first representing the Lamont administration and the attorney general’s office; the second composed of hospital executives.

Presiding was Rep. Jason Rojas, D-East Hartford, the co-chair of Finance, who said the questions reflected “the initial shock” of lawmakers to the breadth and length of the settlement.

But he noted that lawmakers seemed to quickly accept, or at least comprehend, the rationale behind the deal.

“It was a pretty short hearing given the magnitude,” Rojas said.