Sen. Chris Murphy’s photo of a rally in Kiev, taken from the podium over Sen. John McCain’s shoulder in 2013.

Washington – Sen. Chris Murphy has emerged as a leading Democratic voice on foreign policy, helping his party forge an alternative to Trump administration initiatives – and raising his profile in an area that could advance his political career.

Since President Donald Trump assumed office at the beginning of 2017, Murphy, a member of the Senate Foreign Relations Committee, has increased his focus on foreign policy matters. But he’s been active in that arena much longer than that.

In December of 2013 he made a trip with the late Sen. John McCain, R-Ariz., to show support for Ukrainians who wanted  greater independence from Russia.

Most recently, in April, he traveled with another Republican senator, Mitt Romney of Utah, to the Middle East ahead of the Trump administration’s release of its peace proposal — expected in June — for Israel and Palestine.

Since his election to Congress, Murphy has made at least a dozen overseas trips. He’s also a frequent speaker at Washington D.C. think tanks that focus on foreign policy.

All those trips and speeches, as well as his work in Congress, op-eds and frequent tweets, contain a common thread – criticism of the Trump administration’s approach to global affairs that has resulted in a shrunken diplomatic corps and a harder line against U.S. foes, most recently Venezuela and Iran.

“Trump’s America First agenda is pulling America out of the world,” Murphy said. ”If we are not present in other parts of the world, other countries, like China and Russia, will dominate the world. That’s really terrible.”

Although Murphy has reached out to Republicans like McCain and Romney on issues of foreign policy, Emma Ashford, a research fellow on foreign policy at the Cato Institute, said the senator’s greatest accomplishment is helping Democrats reshape their policy on foreign affairs.

“The senator’s views are increasingly what you see in the Democratic Party today,” Ashford says. 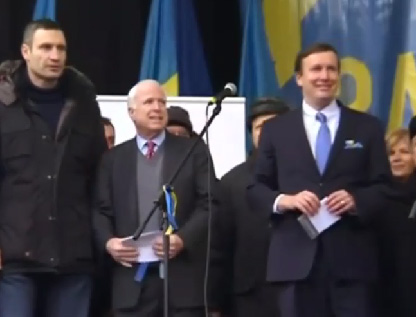 She said Murphy has been ahead of most other Democrats in proposing a non-interventionist role in Israel and that the senator’s ideas  are catching on in his party, where they are now considered “mainstream.”

“It’s really obvious foreign affairs is where he wants to put his efforts,” Ashford said. “And there’s a place in Congress for strong voices in foreign policy.”

Murphy’s views center on increased diplomacy and trade and, with some exceptions, less military intervention – the polar opposite of the Trump doctrine.

His  latest concern centers on the Trump administration’s threats against Iran, saying a conflict with Tehran is “totally avoidable” and that president is “engaged in a series of blind escalations without any endgame.”

As he has before, Murphy has called on Congress to reclaim its war-making authority through the passage of legislation limiting the Trump administration’s authority to launch new military conflicts or expand existing ones.

The latest flareup with Iran was prompted by a report by unidentified U.S. officials who say they have seen photographs of missiles on small boats in the Persian Gulf that were put on board by Iranian paramilitary forces. Tensions escalated even further after an incident with four tankers off the United Arab Emirates on Sunday. U.S. investigators believe Iran is behind an attack on those tankers, but Iran says it has nothing to do with the incident and there is no proof it does.

While Murphy and other Democrats call for restraint, Secretary of State Mike Pompeo ordered the evacuation of U.S. embassy personnel  in Baghdad and engaged in diplomatic saber rattling.

“We have also made clear to the Iranians that if American interests are attacked, we will most certainly respond in an appropriate fashion,” Pompeo said.

While Murphy is becoming a national figure in diplomatic affairs, he said his work on foreign policy is based in part on his job representing Connecticut interests.

“One of the primary responsibilities in being a member of Congress is keeping your constituency safe from harm,” Murphy said. “There are a lot of people who want to do harm to us around the world, and I want to play a role in reducing the likelihood that anything like Sept. 11 ever happens again.”

“So, I think in perilous times like this, part of the job description of a U.S. senator is to play a role in national security and foreign policy,” Murphy said, adding, “I’m also not blind to the fact that there is a legacy of U.S. senators from Connecticut playing a role in the world.”

“Both Joe Lieberman and Chris Dodd were very active in global affairs. I think that elevated their stature in the Senate,” Murphy said. “I don’t think I’ll ever fill the shoes of Joe Lieberman or Chris Dodd, but I think there’s a model there that’s worth pursuing.”

Dodd made his name battling U.S. involvement in the wars in Central America in the 1980s and through his efforts to ease the U.S. economic embargo on Cuba. Lieberman was known for his strong support of Israel and his Middle East initiatives.

Perhaps Murphy’s biggest victory in the foreign policy arena is Congress’ approval of a resolution that would end Saudi-led military intervention against Houthi rebels in Yemen.

After several years of failing to win enough support for his legislation, the resolution was finally approved by the House and Senate this year with bipartisan support. But Trump vetoed the bill earlier this month.

Still, congressional approval of the Yemen resolution set the stage for the next fight over U.S. involvement in that nation’s civil war and showed Trump there was GOP opposition to his policy, inherited largely from Obama. 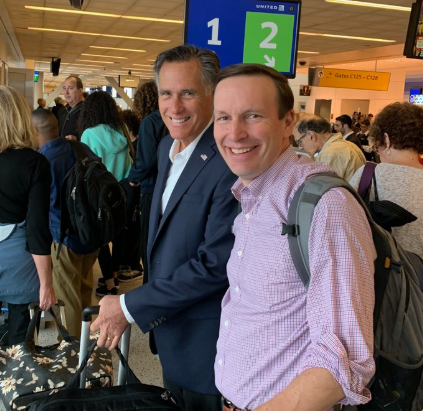 Murphy also led the push to sanction Saudi Arabia, especially after the murder of dissident journalist Jamal Khashoggi, whose assassination last year was believed to be ordered by the kingdom’s government.

While Murphy’s stance on Yemen was adopted by most Democrats and some Republicans, most members of the GOP opposed it.

Senate Foreign Relations Chairman Jim Risch, R-Idaho, for instance, said in a floor speech the Yemen resolution was counterproductive and said it was “common knowledge” there were other legislative proposals to punish Saudi Arabia for its recent actions, including the assassination of  Khashoggi.

Yet Ashford said Murphy “has done a great job in his efforts to end U.S. military involvement in Yemen by pushing back on a situation that is both a strategic problem – bad for U.S. national security – and a humanitarian disaster.”

Ben Rhodes, a foreign policy adviser to former President Obama and co-chair of the liberal National Security Action, said Murphy’s position on Yemen has been adopted by several Democratic candidates running for the White House and “sends a message to Trump.”

“He’s defining what a foreign policy would look like if Democrats take the White House” in 2020, Rhodes said. He also said “Democrats are sometimes afraid to engage in foreign policy,” preferring to campaign on domestic “bread and butter” issues.

“You don’t have a lot of national Democrats talking about foreign policy, and Murphy is filling that vacuum,” Rhodes said. He also said Murphy is using the same approach on foreign policy as he has on two other issues the senator has championed – health care and gun control.

Murphy has bounced between Senate Foreign Relations subcommittees on Europe and the Middle East.

He’s been a fierce defender of NATO, which the senator says has been threatened by the Trump administration’s hostility toward that a strategic alliance between North America and European nations.

“If NATO falls, that makes the United States less safe,” Murphy said. “And Connecticut does a lot of business with Europe … our defense companies sell a lot of equipment over there. I’ve always seen an economic benefit to the state in having a senator that has good relations over there.”

“The Europeans don’t follow our lead anymore, they don’t answer our calls because Trump spends all his time insulting them,” he said.

But Murphy’s main interest is in the Middle East. He said that’s where most of the men and women in uniform from Connecticut end up and “it’s also where the groups that want to do the most harm to the United States anchor themselves.”

Instead of assuming the role of an honest broker, Murphy said, the United States has become “an advocate for the Israeli side.”

Gary Rose, head of the political science department at Sacred Heart University, said Murphy’s interest in foreign policy is “going to move him up the [political] ladder.”

After three terms in the U.S. House, Murphy was elected to the U.S. Senate in 2012, becoming the youngest member of that chamber. Rose said Murphy’s foreign affairs expertise could make him a good running mate for a 2020 Democratic presidential candidate or a future run for the White House.

“I think Chris Murphy has national aspirations well beyond the borders of Connecticut,” Rose said.

But so much interest in world affairs could have a downside at home. Dodd, for instance, was criticized for paying so much attention to Central America and Lieberman’s strong backing of the Iraq War lost him the support of Connecticut Democrats.

“This is a global environment we’re living in,” he said.

Correction: The original version of this story incorrectly named Tehran as the city where U.S. embassy personnel were evacuated. It was Baghdad.