Lamont says he has ‘resolved’ transportation issues with Senate 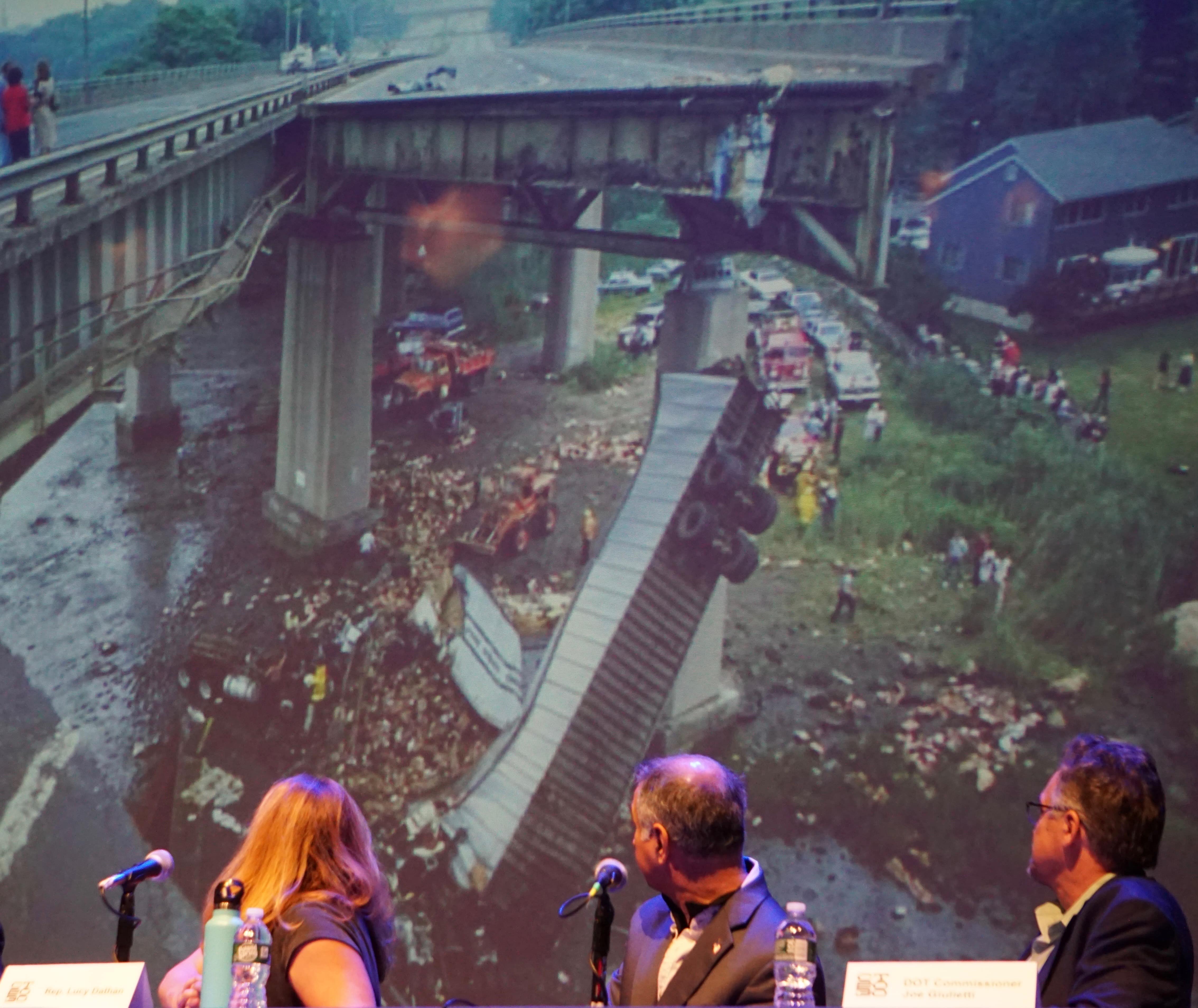 Westport — Gov. Ned Lamont said Sunday night that he believes his administration has resolved all issues raised by Senate Democrats last week as a condition of their support for a 10-year, $19 billion transportation spending plan that would require tolls for tractor trailers on a dozen highway bridges in Connecticut.

“It’s been resolved. I think it’s all been resolved,” Lamont told reporters after a transportation forum organized by supporters of his plan, CT2030. “We’ve got it over to the legislative committee. They’re drafting the bill right now.”

Administration officials met Friday with the co-chairs of the legislature’s Transportation Committee to talk about the framework for raising about $170 million annually from truck tolls, a revenue stream that would be blended with sales tax revenue on motor vehicle sales and general-obligation borrowing.

Senate Majority Leader Bob Duff, D-Norwalk, stopped short of saying every issue had been resolved, but he confirmed that work was progressing on a transportation infrastructure bill. The goal is to pass the bill in special session before the regular 2020 session opens in little more than three weeks.

No vote in expected this week.

The legislation would authorize the Department of Transportation to begin work on raising a dozen electronic tolling gantries, while prohibiting the DOT from charging tolls on passenger cars or trucks other than tractor trailers. Revenue would be collected beginning in 2023 by overhead gantries.

The initial rates would be set in legislation. A transportation oversight board would be empowered to raise rates, but not to exceed the rate of inflation, a mechanism common in other states with tolls, according to Joseph J. Giulietti, the commissioner of transportation.

According to the National Conference of State Legislatures, at least 31 states have regional or statewide tolling authorities.

Last week, some Senate Democrats hinged their support on several conditions, including assurances that the legislation would make clear there is no authorization for passenger car tolls. Others wanted to see a commitment to improved urban bus service and the opportunity for minority-owned businesses to share in the transportation spending. 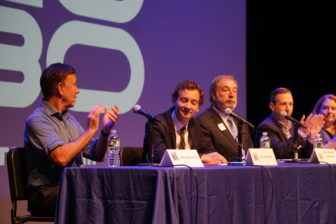 Gov. Ned Lamont joins in applause for Sen. Will Haskell, center, who won his seat promising support for tolls.

Construction unions staged a festive rally and tailgate party before the forum and there was a friendly crowd inside the auditorium of the Bedford Middle School. Each panelist was greeted by cheers.

As panelists spoke, slides from a power-point presentation flashed behind them. One displayed a map of the eastern seaboard, showing every state from Maine to Florida with tolls. The only exceptions were Connecticut and Vermont.

Another showed the aftermath of the 1983 collapse of a bridge that carried I-95 across the Mianus River in Greenwich. Steinberg looked over his shoulder, jerked his thumb at the screen and said, “Remember that?”

In response to the collapse, the legislature established a Special Transportation Fund. The idea was to have a reliable source of money to pay debt service on transportation borrowing by dedicating fuel taxes, certain fees and, eventually, some motor vehicle taxes to the fund.

Lamont said there is no disagreement about the need to address a backlog of transportation projects. More than $15 billion is needed over the next decade to return the state’s highway and commuter rail system to a state of good repair, and Lamont wants additional funding to eliminate highway chokepoints to speed commutes.

“It really gets down to how we pay for this,” Lamont said.

The Republican minorities in the House and Senate are uniformly opposed to any form of tolls or new revenue. Republicans instead have countered with committing much of the state’s annual borrowing to transportation, a plan Democrats say would not be sustainable in the face of other needs, such as school construction and clean-water systems.

Senate Republicans have moved on from the initial borrowing plan, deemed “Prioritize Progress,” and made another proposal to take $1.6 billion of the state’s $2.5 billion budget reserves to pay down pension debt, producing an annual savings of $130 million that could be spent on transportation.

But Lamont has refused to tap into the budget reserves unless they exceed 15% of operating expenses, a fiscal reform adopted in 2017 as part of a bipartisan budget deal. The reserves are now at 13%, but economists fear a coming downturn.

Connecticut’s habit of setting aside long-term fiscal plans for immediate fiscal and political needs was an issue Sunday night. The panel was challenged by audience members over past “raids” on the Special Transportation Fund.

Haskell and others disagreed with that description, noting that the legislature actually had committed sales tax revenue to shore up the Special Transportation Fund, when fuel taxes provided inadequate.

The legislature committed to steadily increase the transfer of tax revenue derived from motor vehicles, with $60 million this year. The transfers are supposed to increase until 100% of the motor vehicle taxes are transferred, producing $424 million in 2030.

But if the legislature did not raid the transportation fund, it is guilty of slowing the pace of the transfers. Rep. Laura Devlin, R-Fairfield, the ranking House GOP member on the Transportation Committee, said Democrats are engaging in semantics when they say diverting funds before they were deposited is different from raiding the fund.

“I am astounded they continue to mischaracterize raiding versus diverting,” said Devlin, who watched the forum from the audience. Devlin also said she objected to the use of the Mianus River picture as “alarmist.”

Haskell said one fact is indisputable: The Special Transportation Fund is facing insolvency in the next five years, and the need for new revenue is stark.

“Doing nothing is simply not an option for me,” said Haskell, who unseated a long-time Republican incumbent last year running on a pro-tolls platform.

Giulietti said the slower times are the result of slower speed limits due to the condition of the tracks and bridges, and the DOT already is working with Metro-North on improvements. Giulietti, a former president of Metro-North, said delays on the shared Connecticut and New York rail system are largely the fault of deferred maintenance on the Connection portion.