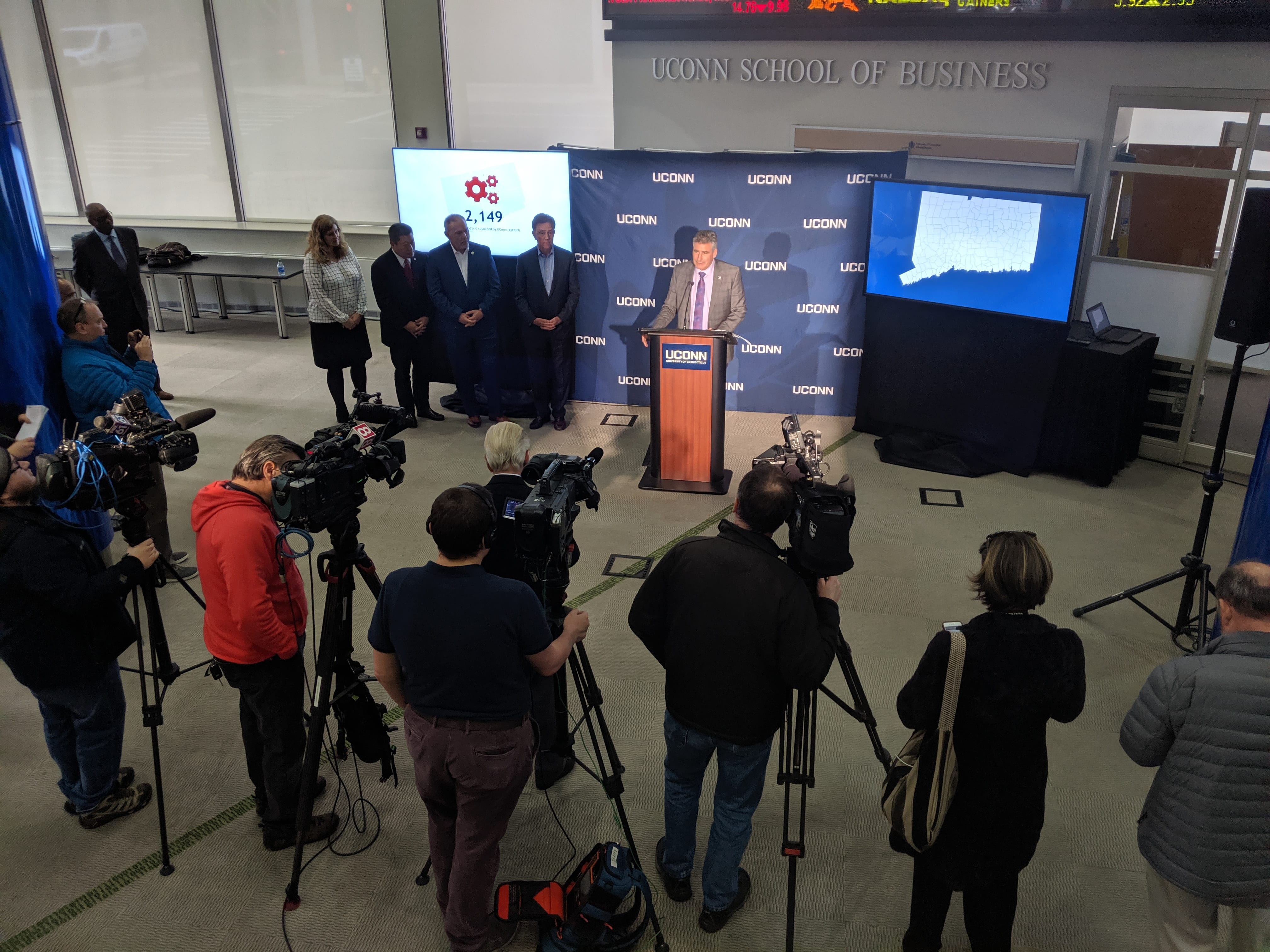 University of Connecticut officials unveil a new interactive report showing the university’s economic impact on every town in the state.

The cost of providing retired state employees with the benefits they were promised has fallen on students and research faculty at Connecticut’s public universities. At the University of Connecticut, $700 of each student’s tuition bill now goes toward covering that liability.

And the bill is expected to rise significantly.

That’s because over the next three fiscal years, the amount the state must pay toward those promised health and pension benefits is projected to increase by 8% a year.

UConn blames these escalating costs for its looming deficits and the snail’s pace of its growth in research activity.

“The university would not face a budget shortfall [next fiscal year] without the unfunded pension and retiree health fringe benefit liabilities,” UConn Budget Chief Scott Jordan wrote the governor’s budget chief in October.

UConn has few options to close its deficits. Officials could raid the additional revenue from the scheduled tuition increases to pay for these increased costs rather than spend it on the state’s flagship university. They could cut spending.

Or officials could make their case to the legislature and governor about the impact the university has on the state’s economy and why the school should get more help covering costs. 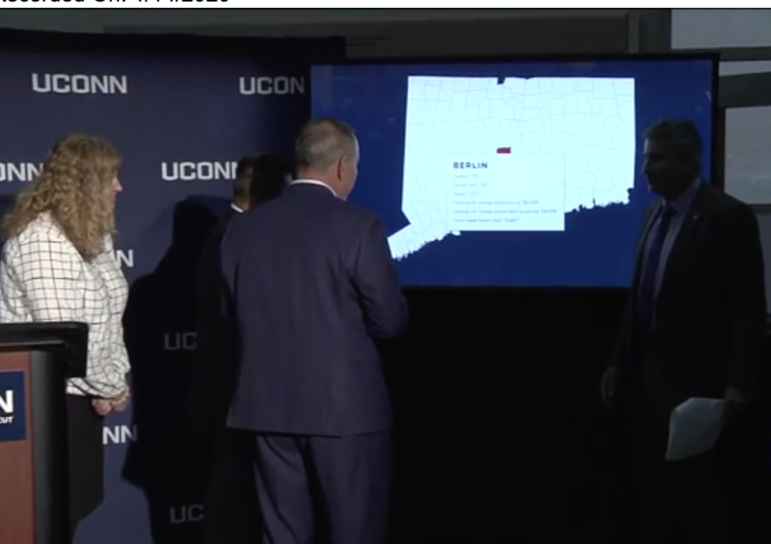 UConn president Thomas Katsouleas  (in shadow at right) shows House Speaker Joe Aresimowicz the impact the university has on the legislator’s district of Berlin.

Before a crowded room in downtown Hartford Tuesday afternoon at the university’s business school, UConn President Thomas Katsouleas began making that pitch with the release of research completed by its faculty that shows the school generates about $5.3 billion in annual economic activity in the state.

“We do have this great impact and I think it’s important to remind people every once in a while,” said Katsouleas.

House Speaker Joe Aresimowicz attended the unveiling of the economic impact report, and was shown that his hometown of Berlin has 183 current UConn students, 135 staff members and 1,211 alumni.

The lawmakers in attendance did not respond with promises of increased funding for UConn, however, or protection from further cuts.

More state funding is not likely headed the university’s way. Nonpartisan fiscal analysts report the state is facing deficits topping $1 billion in each of the next three fiscal years. And, state lawmakers typically target higher education for cuts as they work to close budget shortfalls.

Lamont told reporters after the press conference that he will try and “hold them steady” and doesn’t have an immediate remedy to resolve the problem of escalating retirement costs or the impact it is also having on landing research grants. 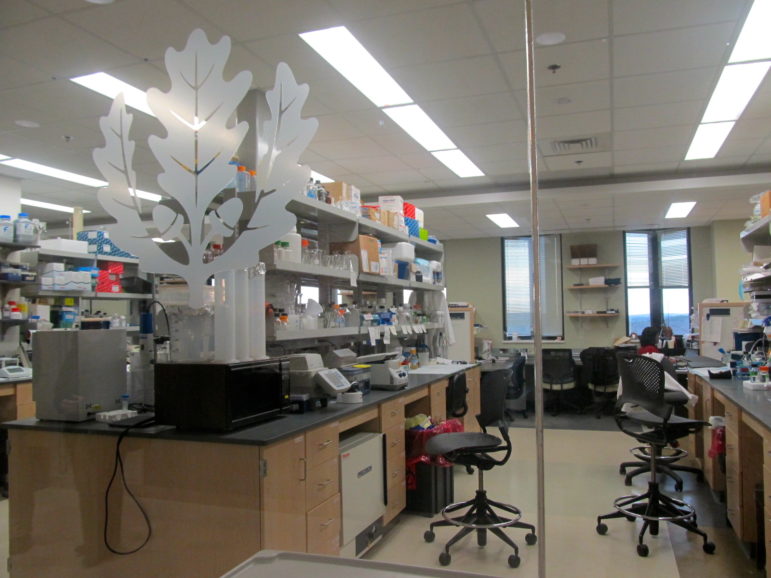 Faculty have long said there is one main obstacle preventing research from taking off as envisioned after the state poured hundreds of millions of dollars into expanding lab space and classrooms at the public university’s main campus in Storrs and health center in Farmington: It’s gotten much more expensive to hire faculty, postdoctoral students and other employees to staff their labs.

This jump is a reflection of the state’s years of failing to adequately save for pensions and other retiree benefits.

These added costs also mean faculty are being turned down for grants, said Katsouleas. They are also impacting the state’s research rankings. In 2005, the state’s flagship university ranked 64th in overall spending on research among public and private research schools by the National Science Foundation. By 2017, the school had fallen to 86th place.

The steep increases are expected to stop in three years, now that legislators have extended the schedule for paying off the state’s massive, $21 billion unfunded retirement liability.

Regardless, the costs will still be huge for higher education.

Katsouleas said the university is trying to come up with a “creative” solution to resolve this issue with legislators. While they work on that, he has directed $6 million in one-time revenue from UConn to serve as a “Band-Aid” this year to bring down the costs on faculty grant applications.

Officials at the state’s other public college system are also facing rising retirement costs and have pitched an idea to the administration and some state legislative leaders. 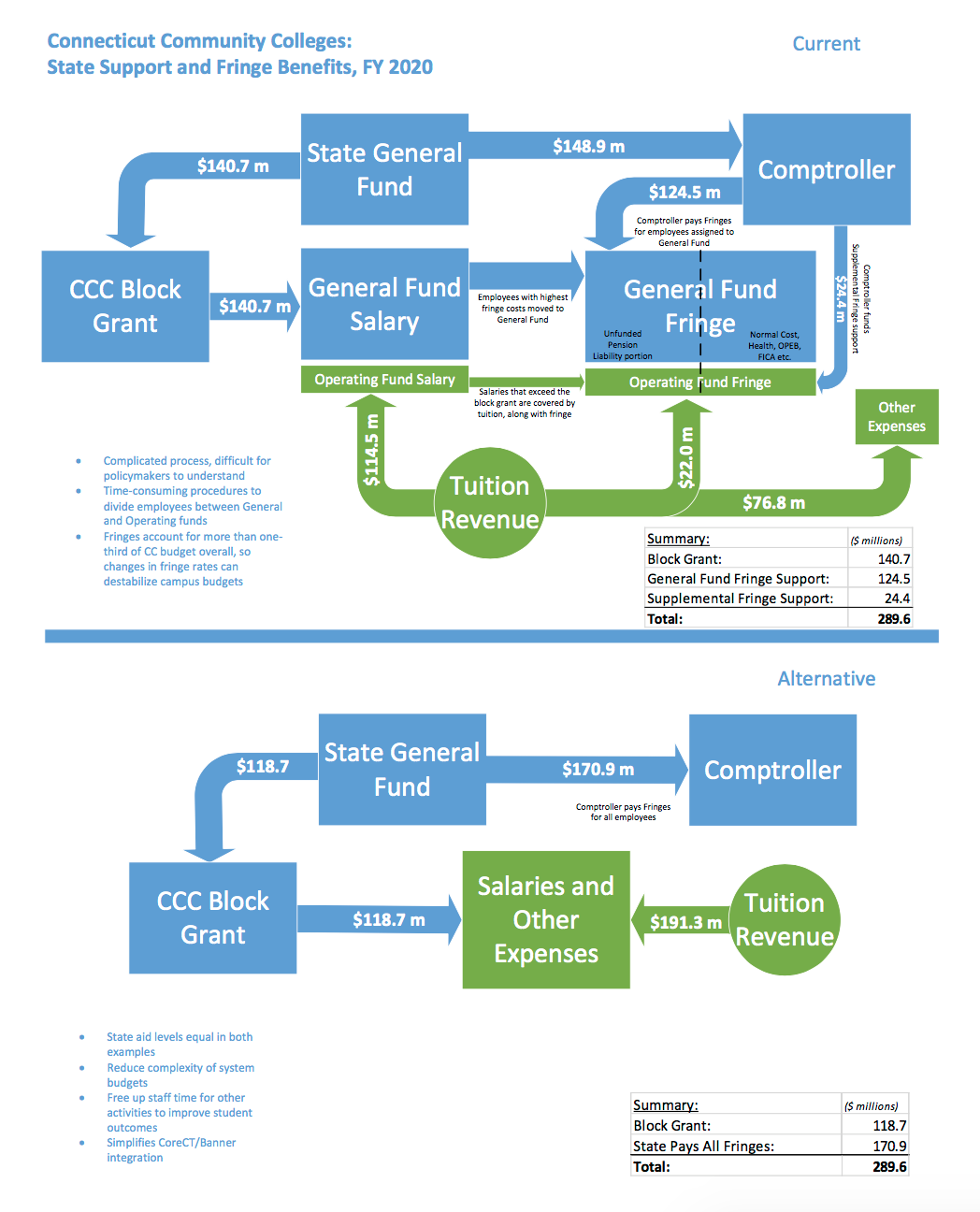 The Board of Regents for Higher Education — the state’s largest public university system, which oversees the state’s community colleges and four Connecticut State Universities and is governed separately from UConn — wants to rework how the state funds higher education.

This would shift the liability of increased costs from the colleges to the state budget. But, Barnes said, state lawmakers can still offset those costs with cuts to the remaining block grant if they choose.

Keith Phaneuf, who covers the state budget, contributed to this report.