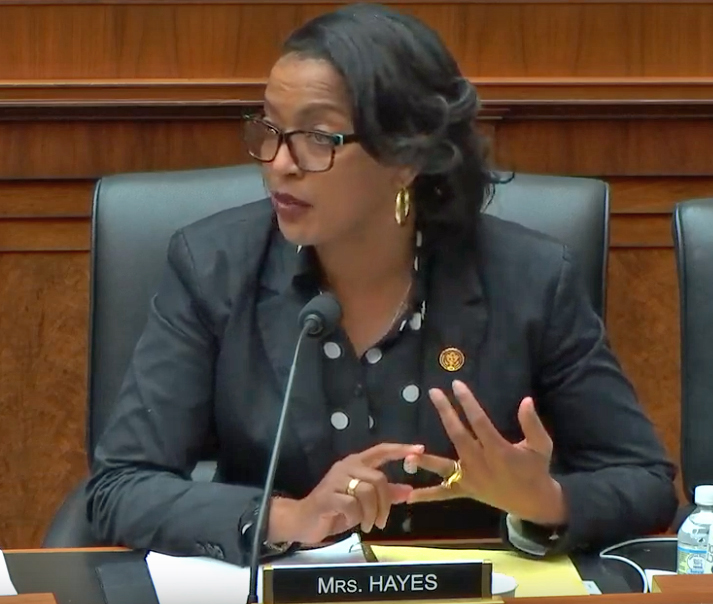 Washington – The saga of Robert Hyde focused national attention on a contest that, even without Hyde’s notoriety, promises to be Connecticut’s most interesting congressional race in this tempestuous election year.

Rep. Jahana Hayes, a 46-year old Democrat who represents the sprawling 5th District, is defending her U.S. House seat for the first time. Her Republican opponent is not yet known — that will be decided by a GOP convention or primary — but the race could be competitive.

The 5th  District has been a battleground before. Then-candidate Donald Trump won 46% of the vote there, and its reputation as a “purple” district has attracted four GOP challengers, including Hyde, all vying for their party’s nomination. 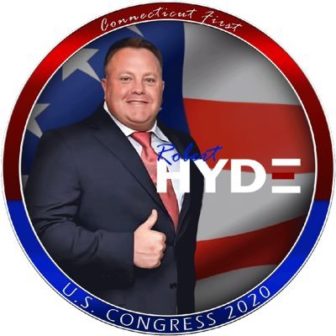 Long-shot candidate Robert Hyde brought national attention to a race that’s in its infancy, but could get interesting.

Hyde, 40, was a long shot for the nomination even before documents were released last week containing his text exchanges with an associate of President Trump’s personal lawyer, Rudy Giuliani, about the surveillance of former U.S. Ambassador to Ukraine Marie Yovanovitch. He’s been asked to quit the race by Connecticut Republican Chairman J.R. Romano, but so far has refused to comply.

The Republican candidate considered the front-runner in the contest for his party’s nomination is David X. Sullivan, who retired last year from a 30-year career as a prosecutor in the U.S. Attorney’s office in Connecticut to run for Congress. His late father, William W. Sullivan, served as a state representative and David Sullivan has the backing of some powerful Republicans, including House Minority Leader Themis Klarides, R-Derby.

Klarides said she’s known Sullivan for many years and that he prodded her to run for political office.

“One day he said to me ‘you should run (for state assembly.)  I said ‘I don’t know anything about that,’” Klarides said, but Sullivan convinced her to take the plunge.

“He’s someone I respect a lot,” Klarides said.

The first African-American woman to represent Connecticut in Congress, Hayes ran as an outsider and underdog two years ago helped by a compelling personal story – she grew up in public housing in Waterbury and was a teen-age mother – her status as a former national Teacher of her Year, and powerful allies like Sen. Chris Murphy.

She drew strong support from union members and the district’s progressives, defeating party favorite Mary Glassman in the Democratic primary and winning the general election, in which woefully-underfunded Manny Santos was the  Republican candidate.

Hayes is no longer the underdog with the fresh face who focused on introducing herself to voters.  She faces her next election as an incumbent running on her accomplishments in Congress and what she’s done for her constituents.

“I’m running on my freshman record,” she said. “I’m going to say ‘this is what I’ve done and I need your support to stay here.'”

Hayes said that, so far, she’s run a “passive campaign,” focusing instead on her congressional duties including “gavel to gavel” attendance at hearings.

But she won’t remain passive. Hayes has started to recruit volunteers and plans to open a campaign headquarters in Waterbury by the end of the month.

When the race to represent the sprawling 5th District, which covers most of the western part of the state and includes 41 towns, begins to heat up this spring it will mirror the sharp partisan divisions across the nation.

There are two other Republicans in the race besides Sullivan and Hyde. They are newcomer Ryan Meehan, a 37-year-old Litchfield businessman who filed his candidacy at the beginning of this month, and Ruben Rodriguez, 41, a water meter technician for the city of New Britain. 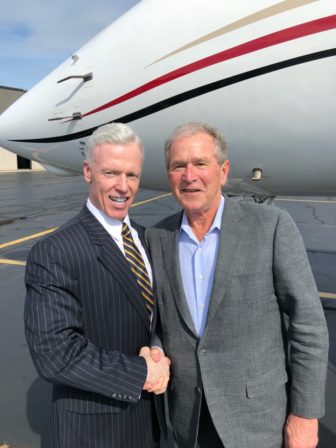 This photo of David Sullivan and former President George Bush is on the candidate’s web site.

All the GOP candidates are political neophytes, as was Hayes when she first ran for Congress two years ago. The Republicans support the policies of Donald Trump and say having the president at the top of the ticket in November’s elections will help them in the 5th, with its many Trump supporters.

“It’s amazing how people are reacting to Trump,” Rodriguez said.

“I, like many of his ardent supporters, applaud his economic policies which have served to unshackle our economy and produce unprecedented prosperity across the United States,” he said. “At the same time, many people find fault with Mr. Trump’s style of communication, especially his penchant for tweeting.”

University of Connecticut political science professor Robert Schurin said “there are some true believers who think Donald Trump can pull in Republican votes.”

But Schurin also said Republican candidates are not fighting a lost cause in the 5th..

“Anybody has a chance,” he said.  “That’s a district that was represented by Republicans.”

But not since 2007, when Rep. Nancy Johnson, the last Republican to represent the 5th District was replaced by Democrat Chris Murphy, now a U.S. senator and political mentor to Hayes.

Hayes provides a sharp contrast to the Republicans in race, who are all white men.

She voted with most of her House Democratic colleagues to impeach Trump, and while not militant, supports progressive ideals, including Medicare for All.

Hayes said so many Republicans are running to challenge her “because I make it look easy.”

“I’m not surprised people are coming out,” she said.

Hayes also said she expects her GOP challenger to take aim at her for voting for Trump’s impeachment, which she said could cost her some votes.

“I know there are some people who won’t forgive me for that,” she said. “But it was the right thing to do.”

Sullivan said he decided to run for Congress because he was alarmed with Hayes’ “strong embrace of incredibly costly and ineffective progressive priorities such as the multi-million Green New Deal and even costlier Medicare for All proposals.”

“I don’t believe the people of the fifth district want these radical, extreme, socialist programs and I certainly don’t want them for my children,” Sullivan said.

Sullivan is running on traditional GOP issues, including lower taxes and less regulation.

While he has no experience in elected office, Sullivan said he has “a lifetime of public service experience in law enforcement and more recently in higher education,” teaching trial advocacy at Yale Law School and other courses at the University of New Haven and Western Connecticut State University.

“And just as important, throughout my career as a federal prosecutor, I have also demonstrated the ability to lead, and to work cooperatively and constructively with others, to achieve important and common goals,” Sullivan said. 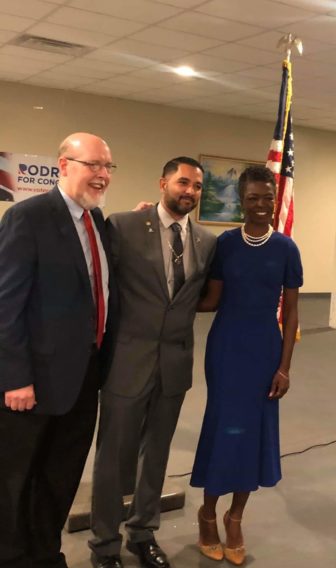 Meanwhile Rodriguez, who was born and raised in Puerto Rico and moved to Connecticut about  20 years ago, is seeking support among the district’s Latino and black communities.

“As a Republican, it’s hard to reach out to minorities,” he said.

But Rodriguez is trying, campaigning at churches and community events.

He was helped by Scherie Murray, a black Republican who is challenging U.S. Rep. Alexandria Ocasio-Cortez, D-N.Y., a progressive lightning rod for GOP attacks.  Murray attended a fund-raiser for Rodriguez in November.

“By us teaming up, we can help each other,” Rodriguez said.

Hayes has an enormous fund raising advantage over the Republicans who want to take her seat.

She had nearly $900,000 in cash on hand in her campaign account on Sept. 30 and is likely to have sped by the million-dollar mark by now.

Sullivan, meanwhile, raised more than $100,000 last year for his campaign, a fundraising threshold his campaign called “a figure that attracts support from more donors and attention from media, both inside and outside of the district, and separates candidates in a multi-candidate field.”

Rodriguez raised just $3,274 and Hyde and Meehan have not yet filed any fundraising information with the Federal Elections Commission.

Despite the wide disparity in political fund raising, freshmen are most vulnerable during their first race for re-election and Hayes said she’s taking no chances.

“It will be a hard-fought race,” Hayes predicted. “You never make everybody happy.”

Still, Hayes said she “would not run a negative campaign,” a pledge many candidates for office keep until their rivals start slinging mud.

She is on the Democratic Congressional Campaign Committee’s list of 44 vulnerable candidates this year who are priorities for the organization’s help, even though Hayes won her seat by 12 points.

That’s because the 2016 presidential performance is an important factor when the DCCC decides how to allocate its resources. Hillary Clinton carried the 5th District by only 4 points.

Hayes said she underwent a “baptism by fire” in her first term, starting her congressional career as the the federal government was suffering from a shutdown due to partisan arguments over the federal budge. And this year, Hayes was required to vote on rare, momentous issues like restricting the president’s war powers and impeaching Trump.

“I have had a year that people in this body who have been here many years have never had before,” she said.