Democrats taking their case directly to the American public 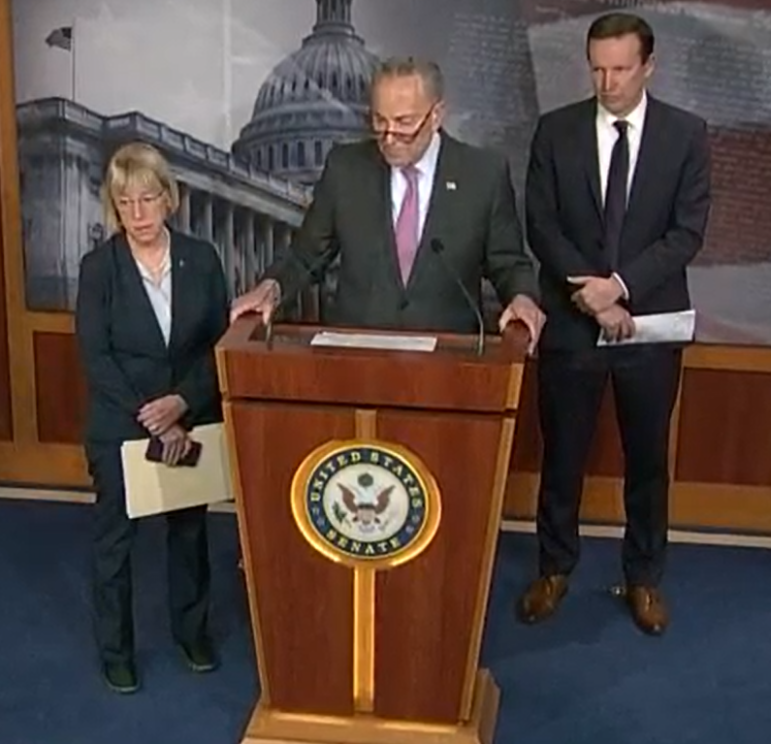 Washington — Unable to change the rules of President Donald Trump’s impeachment trial to allow for interviewing new witnesses and the introduction of new evidence, Senate Democrats, including Connecticut Sens. Richard Blumenthal and Chris Murphy, resorted to a new strategy Wednesday.

They are appealing directly to American voters to pressure their GOP colleagues to allow witnesses later in the trial and to attempt obtain documents that have been blocked from release by the White House.

McConnell’s minor changes to of the rules “didn’t unrig the trial,” Murphy said. “But what we did see yesterday was that Republicans understand their constituents are paying attention.”

Republican senators voted in lock-step Tuesday and into the early hours of Wednesday to defeat ten amendments proposed by Democrats that would alter the rules of the trial by calling witnesses such as Trump’s acting chief of staff Mick Mulvaney and former national security adviser John Bolton —  and forcing the Trump administration to release documents that have been withheld by the White House.

“My colleagues are now on record,” Blumenthal said. “And they will be haunted by history and perhaps by the voters because they’re on record against witnesses and documents.”

Perhaps bolstered by polls that show a majority, nearly 70 percent, of Americans support having the testimony of witnesses at the trial, Schumer vowed to continue to press for them. “The pressure will continue to build on Republican senators,” he said.

Republicans argue that the witnesses and documents should have been sought during the House impeachment inquiry, which they say was “rushed” and completed in only 48 days.

But Trump’s Justice Department has argued for months that courts don’t have a say in disputes between the White House and Congress.

And in Davos, Switzerland,  where the president was attending a international economic summit on Wednesday, Trump said he would like to have Secretary of State Mike Pompeo and Bolton testify in the impeachment trial, but said it could pose a national security risk.

Meanwhile, with the aid of visuals and videos of House impeachment hearings held last year, Democratic impeachment managers  began their three days of opening arguments in the trial, making their case for Trump’s removal.

Their narrative was aimed both at senators,who will act as jurors, and the American public.

“We are here today — in this hallowed chamber, undertaking this solemn action for only the third time in history — because Donald J. Trump, the 45th President of the United States, has acted precisely as (Alexander) Hamilton and his contemporaries had feared,” said Rep. Adam Schiff, the leader of the House managers. “President Trump solicited foreign interference in our democratic elections, abusing the power of his office by seeking help from abroad to improve his reelection prospects at home. And when he was caught, he used the powers of that office to obstruct the investigation into his own misconduct.”

The Democratic House has charged Trump with two articles, abuse of power and contempt of Congress, alleging the president pressured Ukraine to investigate a political rival, former Vice President Joe Biden and his son Hunter, and then blocked the House from interviewing key witnesses and from access to documents.

And Murphy said “that’s not a conversation that’s happening between Republicans and Democrats.” He added: “We’re not in the business of trading away relevant witnesses for reelection gambits for the president.”

Blumenthal also rejected the idea of a deal, saying Senate Democrats are focused on witnesses with direct, firsthand knowledge of the president’s conduct, not Joe or Hunter Biden.

After the first day of the trial Tuesday,  Murphy has kept his promise to provide constituents with a “behind the scenes” look at the impeachment trial on Twitter.

This is the third impeachment trial  in U.S. history, but the first in which senators use social media to reach constituents.

In the early hours of Wednesday, Murphy tweeted that he is sitting on the front row “so I’m right on top of the impeachment managers.”

“As it gets late, both sides start to get overly chippy and personal. I’m alarmed at how often the parties are directly addressing each other,” Murphy tweeted. “Neither the managers nor the president’s lawyers are on trial. Trump is,” he said.

“Good for Roberts for stepping in gently,” Murphy said.

But in contrast with the testy exchanges on Tuesday, House managers on Wednesday calmly laid out their case for the removal of Trump — an unlikely outcome since it would require 67 votes from Republican-dominated chamber.

“I looked across at my Republican colleagues, they were listening intently,” Blumenthal said in a video he posted on Twitter. “Very few were taking notes, but a lot of us were doing it.”

Senators are required to sit quietly in their seats for the duration of the trial, without cell phones or any electronic devices. But during the hours of presentation of the case against Trump Wednesday, some of the GOP desks were empty.

After the seven House managers finish presenting their case, the president’s lawyers will take over, most likely on Saturday.

Attorney Jay Sekulow, a member of Trump’s defense team, told reporters that the response to the Democrats’ case would include both a rebuttal of the charges and a defense of the president’s actions. “We will challenge aggressively the case that they’re putting forward based on what we’re hearing and we also have an affirmative case that we’re going to make as well,” he said.

After both sides present their cases, senators will have 16 hours to submit written questions to each side. After that, Democrats hope they will be able to call witnesses or subpoena documents.