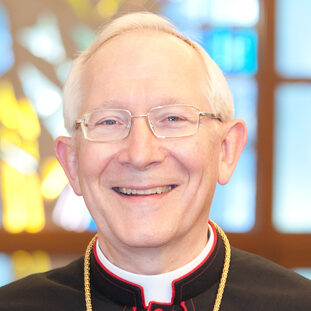 Archbishop Leonard Blair, along with other Catholic leaders, said the use of vaccines was not immoral according to church guidance.

The archbishop of Hartford, along with the bishops of Bridgeport and Norwich, said Wednesday that they encourage the use of vaccines among school-age children, but they stopped short of endorsing an effort to repeal the state’s religious exemption from mandatory immunizations.

A week before the start of the legislative session, the religious officials said the use of vaccines is “not immoral according to church guidance.”

“There is no religious teaching against the use of these vaccines for Catholics,” Archbishop Leonard Blair of Hartford, Bishop Frank Caggiano of Bridgeport, and Bishop Michael Cote of Norwich wrote in a statement. “The Catholic Church encourages the use of vaccines, and our Connecticut Catholic schools require mandatory vaccinations.”

The statement was also signed by Auxiliary Bishop Juan Miguel Betancourt of Hartford and Eparch P. Paul Chomnycky of Stamford.

The faith leaders, however, urged lawmakers to only erase the religious exemption in the case of “grave public health concerns.”

“The Connecticut Catholic Conference, our public policy office, stands as a defender of religious liberty for all,” they wrote. “In general … all religious exemptions should be jealously guarded. Any repeal of a religious exemption should be rooted in legitimate, grave public health concerns.”

Gov. Ned Lamont and State Health Commissioner Renee Coleman-Mitchell have recommended the religious exemption be eliminated effective Oct. 21, 2021, to give parents time to prepare for the change. Vaccinations are required for all students entering public and private schools, but home-schoolers are not covered.

The proposed legislation would not force children to be immunized, but it would bar some unvaccinated kids from enrolling in Connecticut’s schools. Coleman-Mitchell and other state officials have cited concern for children with compromised immune systems who cannot receive shots for medical reasons.

State and legislative leaders have pointed to the national measles outbreak last year and to data that show dozens of Connecticut schools have fallen below the threshold needed to maintain herd immunity as reasons to repeal the religious exemption.

A bipartisan working group of legislators debated whether to “grandfather in” children whose parents had claimed the religious exemption – meaning that if the kids were already enrolled in school, they could stay. Only new children entering the state’s public and private schools would be barred from choosing the religious exemption.

But recently, lawmakers appeared to be backing away from that idea.

“Since we started this debate last year, a bunch of states have passed laws on this issue. There’s a tendency to give people some time – but a limited amount of time – to comply with the new law,” House Majority Leader Matthew Ritter, D-Hartford, told the CT Mirror earlier this month. “We’re wrestling with that. I think there should be some amount of time, but I don’t know that it should be a very elongated period.”

A draft of the bill is expected to be released in the coming weeks, and a public hearing on the proposal has been scheduled for Feb. 19.