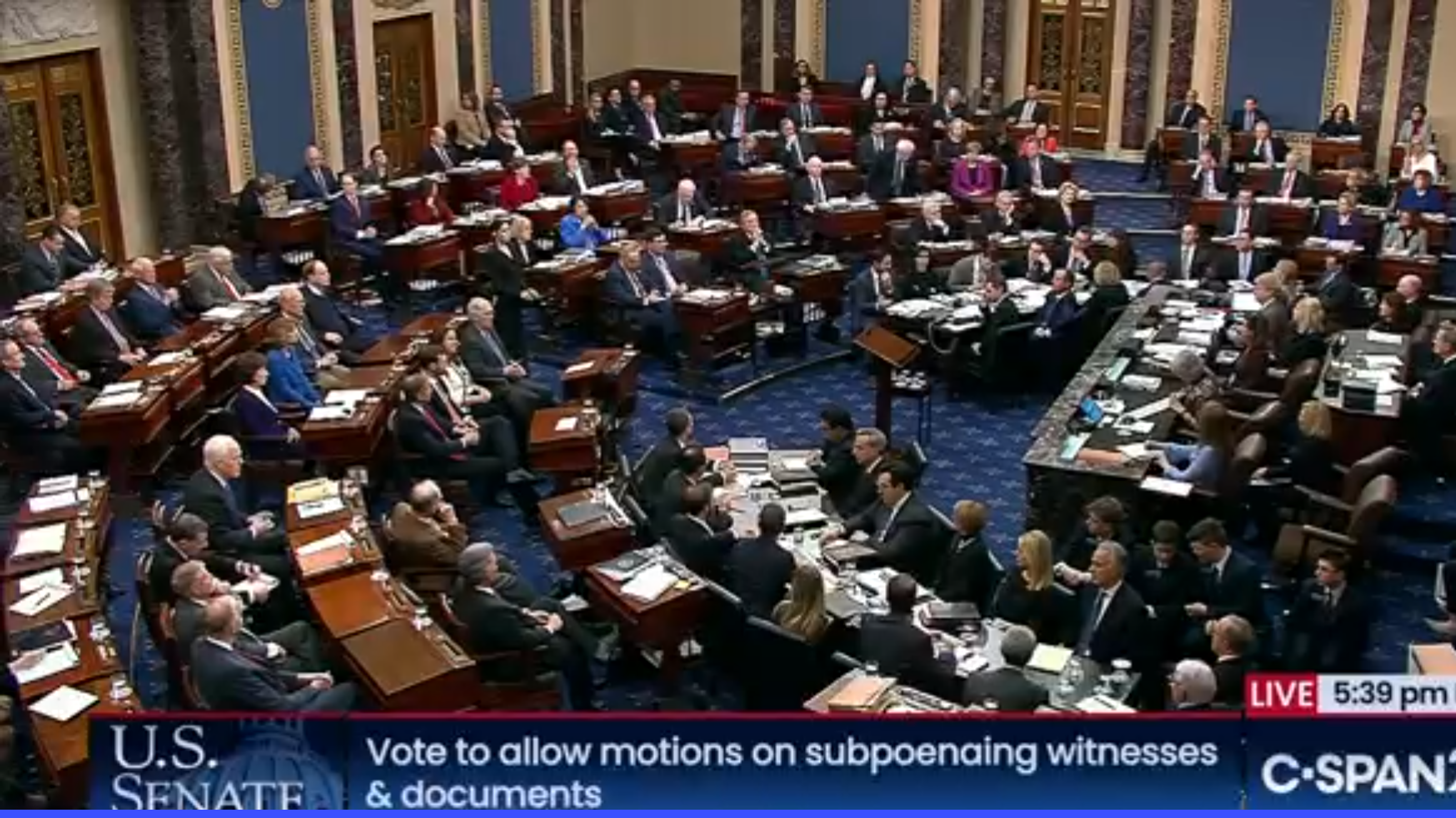 Senators voted 49-51 on a motion to call witnesses and subpoena documents in the president’s trial.

That vote prompted Democrats, including Connecticut Sens. Richard Blumenthal and Chris Murphy, to call the impeachment trial a “sham” and a “cover-up.”

“If the trial is rigged to keep hidden the most damming, most important, most relevant evidence, then it’s not a trial,” Murphy said.

Blumenthal said, “I was so deeply disappointed and dismayed to see such partisan divide, such a betrayal of our constitutional obligation.”

Every Republican in the Senate, except Sens. Susan Collins of Maine and Mitt Romney of Utah, voted against allowing new documents or new witnesses.

The 51-49 vote means the Senate will now move to vote on two articles of impeachment, abuse of power and contempt of Congress that stem from charges Trump withheld U.S. military aid to Ukraine to pressure Kiev to investigate a political rival, former Vice President Joe Biden. It’s expected the president will be acquitted of both charges.

But that vote will not happen before Wednesday. There will be several votes on Democratic amendments Friday evening. Then the trial will reconvene on Monday.

The House managers who prosecuted the case and the president’s legal team will give closing arguments. Then each senator will have the right to speak before votes are taken on the articles, a process that usually occurs behind closed doors, outside the view of television cameras, the press and others.

But Senate Majority Leader Mitch McConnell bowed to a request from Democrats to have their arguments heard and agreed to allow the speeches to occur in public, while the Senate is not holding the trial, from Monday through Wednesday.

“The Senate deliberations should be fully open to the public,” Blumenthal  said. “After a White House cover-up and a sham Senate trial, the very least we owe the American people is complete transparency in how we are contemplating this hugely consequential decision.”

The White House wanted the trial to wrap up before Sunday, when the president is scheduled to give an interview with Fox News, or at the very latest before he delivers his State of the Union address Tuesday evening.

The vote on witnesses Friday came after several hours of debate and after new disclosures from the most important witness the Democrats had hoped to hear from – former national security adviser John Bolton.

According to a story in the New York Times Friday about a manuscript of a yet-unpublished book authored by Bolton, Trump asked the former national security adviser to call Volodymyr Zelensky, who had recently won election as president of Ukraine, to ensure that Zelensky would meet with Trump attorney Rudy Giuliani.

At the time, Giuliani was planning a trip to Ukraine to discuss the investigations Trump sought into Biden and his son Hunter. Bolton wrote that he never made the call.

The president denied the meeting ever happened.

Murphy almost upended Democratic efforts to hear witnesses at the impeachment trial by publicly opposing his colleagues’ idea to have Supreme Court Chief Justice John Roberts, who is presiding over Trump’s trial, break a tie vote on the issue. Democrats believed Roberts would be more likely to vote in favor of calling witnesses than Vice President Mike Pence.

Murphy said that while the U.S. Constitution mandates the vice president cast a tie-breaking vote in the Senate “it’s silent on that matter in an impeachment trial.” That, Murphy said, led him to believe Roberts should not vote.

But Murphy was spared from going against his party’s interests when Sen. Lisa Murkowski, R-Alaska, considered a  swing vote, voted “no” on the witness issue.

Murkowski said the U.S. House sent the Senate articles of impeachment that were “rushed and flawed.” Murkowski also said she was concerned about having a 50-50 vote that would put pressure on Roberts.

“It has also become clear some of my colleagues intend to further politicize this process, and drag the Supreme Court into the fray, while attacking the Chief Justice,” she said in a statement. “I will not stand for, nor support that effort.”

Blumenthal supported having Roberts break a tie in the Senate, but said the chief justice would face “blowback,” at least in the short-term, for doing so.