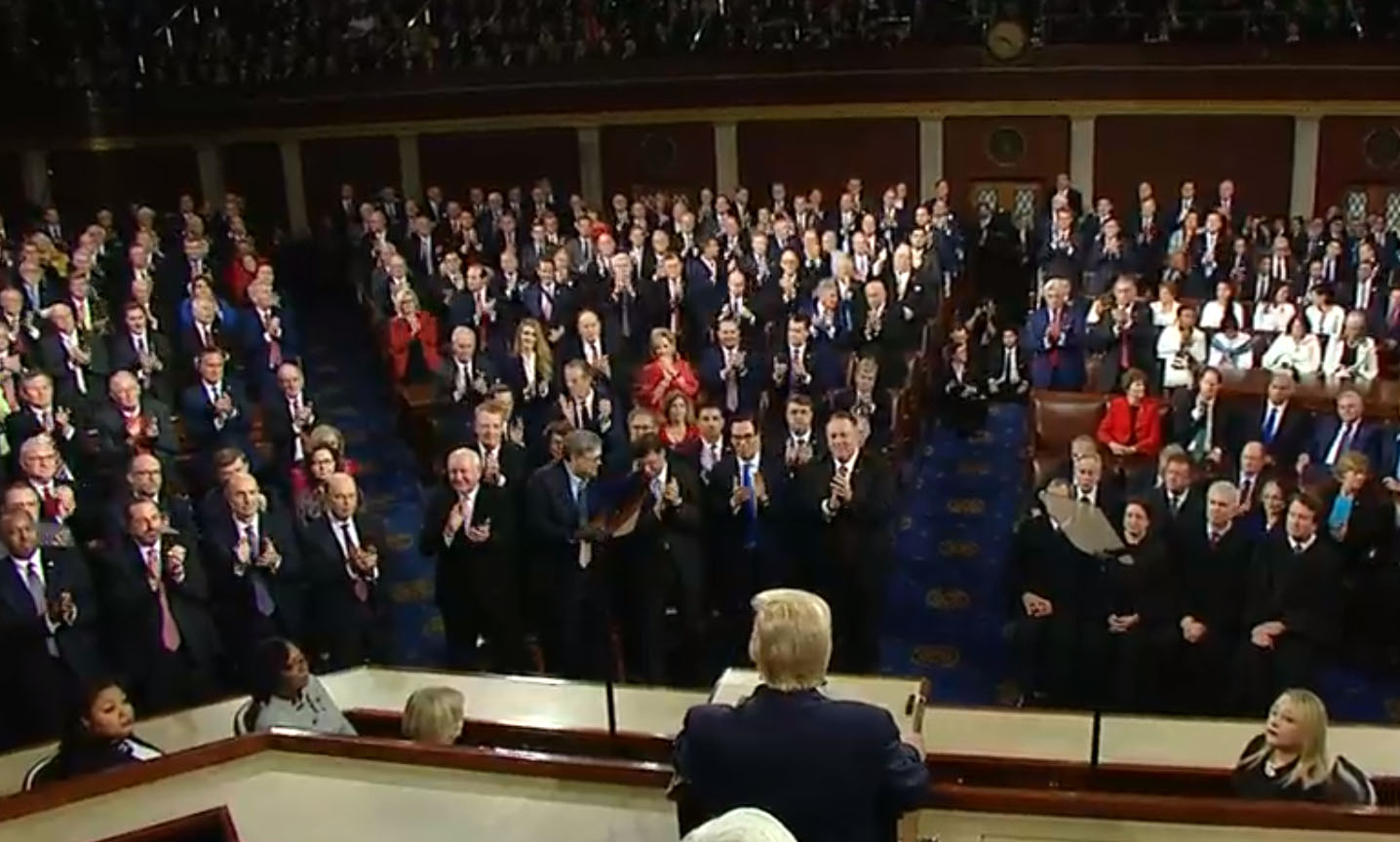 Washington — President Trump’s third State of the Union address focused on the strength of the U.S. economy, the hot job market and trade deals.

It drew heavy applause and chants of “four more years” from the Republican members of Congress filling the chamber of the House. But Connecticut’s Democratic lawmakers called the address a campaign speech. They accused the president of breaking his promises and said the economy is not helping most Americans.

Immediately after the speech, Sen. Chris Murphy, tweeted that he regretted attending.

“That was a disgrace,” Murphy said. “I should not have gone. It was a re-election pep rally from beginning to end, filled with political stunts and verifiable lie after verifiable lie. I get it,” Murphy continued, ” — presidents use their last SOTU to make the case for re-election. But that crossed a line.”

Trump returned to a favorite theme, that he was “making America great again.”

“In just three short years, we have shattered the mentality of American decline and we have rejected the downsizing of America’s destiny,” Trump said to heavy applause. He ticked off a list of accomplishments, including that his administration has poured trillions of dollars into building up the country’s military might.

He was addressing the nation the evening before the Senate is expected to acquit him of impeachment charges based on his dealings with Ukraine. But Trump made no mention of his impeachment, which has consumed Congress for weeks. He focused instead on the economy and other issues, including many that appeal to his Republican base, including opposition to abortion, support for the Second Amendment and support of prayer in school.

“It works for the wealthy, but it is an illusion for the middle-class,” Larson said. “His economic policies are leaving the majority of Americans behind. He’s been focused on the stock market and 401ks, while neglecting the inequality and economic insecurity faced by too many.”

Conservative radio show host Rush Limbaugh reacts to being told he will receive the Medal of Freedom.

Trump surprised his audience of lawmakers, their guests, cabinet members and other VIPS by presenting the Presidential Medal of Freedom to conservative radio show host Rush Limbaugh, who is seriously ill with cancer.

He also recognized Venezuelan opposition leader Juan Guaido as “the true and legitimate president of Venezuela,” eliciting a rare moment of bipartisan applause.

The president also spoke about health care: “We will always protect patients with pre-existing conditions,” he said. He also touted his administration’s success at bringing the cost of prescription drugs down.

But Democrats, who have made the failings of the nation’s healthcare system a top issue in their campaigns, were ready for that. Before the speech, House Speaker Nancy Pelosi held a press conference where she introduced her guests, twins from San Francisco who are diabetic and patient advocates.

Pelosi said Trump would “desperately try to distract the American people from the reality of his all-out assault on health care.” She said “the public won’t be fooled” because he has tried to dismantle the Affordable Care Act.

At the end of the president’s address, Pelosi, who had sat behind Trump, tore his speech in two.

Rep. Rosa DeLauro, D-3rd District, also invited a diabetic, Kristen Whitney-Daniels of Shelton, who has had to ration her insulin since she turned 26 and could no longer remain on her parents’ health insurance policy. She volunteers for an organization that fights to bring down the cost of insulin and said this was the first time she visited Washington D.C. as an advocate.

“I think it’s clear that the American people care about health care, that’s a number one priority, Whitney Daniels said.

Trump called Democratic Medicare for All plans “a socialist takeover of our healthcare system.” 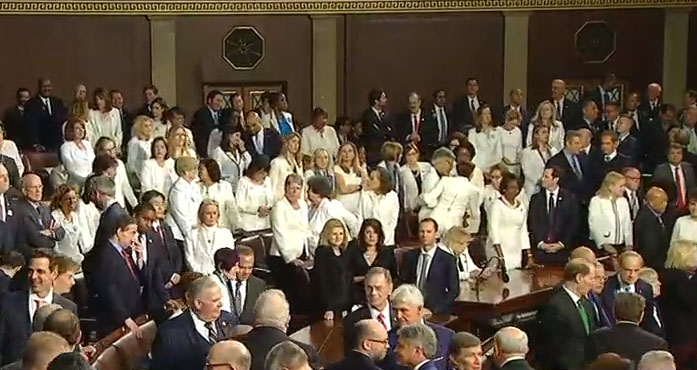 DeLauro, like many Democratic female lawmakers, wore white in honor of the 100th anniversary of the 19th amendment, which gave women the right to vote. She was skeptical of Trump’s vow to lower the cost of prescription drugs. “He’s gone back on every promise,” she said.

The president also turned to a favorite, but divisive, theme – immigration.

He spoke of “a long, tall, and very powerful wall” that he said is under construction along the U.S.- Mexico border. He slammed  “sanctuary cities” like New York that don’t hold all undocumented immigrants whose jail terms are finished so that federal immigration officials can take them into custody. Several Connecticut towns and cities have adopted this policy, as has the state.

“Tragically, there are many cities in America where radical politicians have chosen to provide sanctuary for these criminal illegal aliens,” Trump said.

To Connecticut’s Sen. Richard Blumenthal, the president’s  “small gestures toward bipartisanship” were  “vastly outweighed by lies about healthcare, incendiary insults about immigrants, and fake boasts claiming credit for economic progress.”

The president also talked about “lifting” people off welfare and food stamps. Republican lawmakers cheered, but Democratic grumbling was heard, with one lawmaker blurting out “no.”

The president also vowed to “always protect your Second Amendment right to keep and bear arms.” That’s when Hayes got up from her seat and left the chamber.

As a counterpoint to Trump’s pro-gun stance, Murphy invited Deborah Davis, an organizer with the Hartford-based Mothers United Against Violence, to attend the address. Davis lost her son to gun fire in 2010. ”We are hoping that the president can see [gun safety] as a movement,” said Davis before the speech.

The Democratic women focused on their party’s efforts to the rebuild nation’s infrastructure, reduce gun violence and improve access to health care.