Murphy to travel again to Ukraine, meet with Zelensky 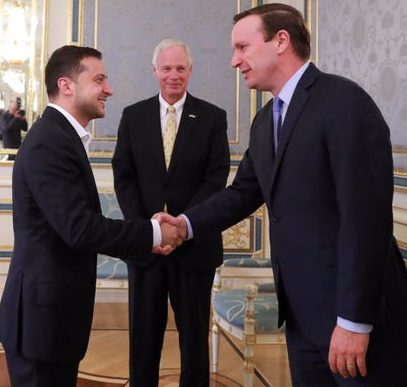 Washington – Sen. Chris Murphy, whose trip to Ukraine last summer was cited in the effort to impeach and remove President Donald Trump, is going to Kiev again.

As he did in September, Murphy is traveling to Ukraine with Sen. Ron Johnson, R-Wis. But this time Sen. John Barrasso, R-Wyo., is making the trip with them.

Murphy and Johnson diverged sharply on their accounts of their last trip together to Kiev, the capital of Ukraine.

Johnson told House impeachment investigators that Ukrainian President Volodymyr Zelensky never said he felt pressure to provide the United States with anything in return for U.S. military aid that had been held up by Trump.

Murphy said he had a different take on the situation, that Zelensky had been receiving “improper overtures” by Trump’s personal lawyer Rudy Giuliani, who was pressing  Ukraine to investigate Democratic presidential candidate Joe Biden. Murphy said Zelensky did not want to become involved in U.S. politics and was indeed feeling pressure.

Murphy announced his upcoming trip Ukraine in a tweet.

“NEWS: I’m heading to Ukraine Friday to meet with President Zelensky. Joined by @SenRonJohnson and @SenJohnBarrasso,” Murphy tweeted. “Trump may have gotten away with the corruption of the U.S.-Ukraine relationship, but that can’t stop us from trying to rebuild bipartisan support for the alliance.”

In addition, the  senators, all members of the Senate Foreign Relations Committee, issued a joint statement on Thursday to announce their trip.

“The U.S.-Ukraine relationship is as important now as ever,” the statement said. “The future of Ukraine matters to the United States and we must make sure Ukraine knows that we view them as a strategic ally. This is why we’re going to Kiev as a bipartisan delegation to reinforce our support with Ukrainian President Volodymyr Zelensky.”