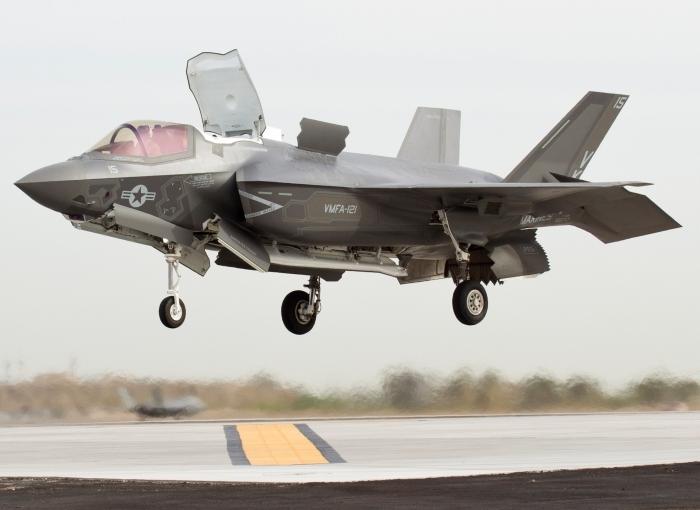 The F-35B is the most expensive version of the Joint Strike Fighter.

Washington – The Trump administration told Congress on Thursday that it plans to divert money from the F-35 program, the National Guard, and other weapons programs to fund his border wall, drawing condemnation from Connecticut lawmakers.

“This move actively threatens our national security, hindering the National Guard’s ability to respond to emergencies and rolling back planned funding for the F-35,” said Sen. Richard Blumenthal. “Our defense budget is not a piggy bank the president can raid to fund his useless vanity project on the southern border.”

Rep. Joe Courtney, D-2nd District, said, “Today, the Trump administration conducted a hit-and-run strike on the 2020 defense budget, which the President just signed into law on December 20, and boasted about in his State of the Union address last week.”

The reallocation of another $3.8 billion in military funding means the Pentagon has given nearly $10 billion since last year to help pay for a wall between Mexico and the United States.

On Thursday, the Trump administration said it plans to cut two of the six F-35B’s whose funding was appropriated by Congress last year. Pratt & Whitney builds the engines for those expensive versions of the F-35, developed solely for the Marines and capable of vertical take offs and landings. Cutting two F-35B’s would divert $233 million to the border wall.

The Trump administration also wants to strip $156 million for advanced procurement for the F-35A, a version of the jet fighter used by the Air Force.

Millions more would come from reprograming money from other weapons systems, including the C-130 program, and eliminating all eight MQ-9 Reaper drones that Congress has funded.

Another $2.2 billion would come from the Pentagon’s counter-narcotics program.

And the National Guard and reserves would lose about $1.3 billion in what the reprogramming request describes as unnecessary funding.

“The shortsightedness of this administration is dumbfounding,” said Sen. Chris Murphy, D-Conn. “President Trump just stole money from national security priorities that keep our country safe and National Guard equipment that saves lives in real national emergencies to pay for his ineffective and racist border wall.”

Murphy also said Trump is “playing politics with U.S. national security, and manufacturers in Connecticut and the Connecticut National Guard are going to pay the price.”

As a member of the Senate Appropriations Committee, Murphy said he would make sure the funding is restored in the 2021 budget.

But Trump has kept Pentagon funding for 2021 at 2020 levels in a budget the White House released this week.

That budget also proposes funding only one, not two, Virginia-class submarines next year, which has set up another fight between Connecticut’s congressional delegation and the Trump administration.

Last year, the Trump administration diverted funds from the counter-narcotics program and from construction projects at the bases in the United States and overseas to build his wall.

The administration is expected to tap those construction projects again this year, endangering plans to build a new, $72 million pier at the New London Naval Submarine Base.

To take that funding, Trump is using a little-known statute in U.S. code which allows the Pentagon, in the event of a national emergency requiring the deployment of troops, to divert military construction funds to pay for infrastructure needed by those forces.

Trump has deployed thousands of U.S. troops along the U.S.-Mexico border.

Since the Trump administration is diverting military funds without approval from Congress, which under the U.S. Constitution is given the power to appropriate federal funds, some states and advocacy groups are challenging the legality of the administration’s plans in federal courts.